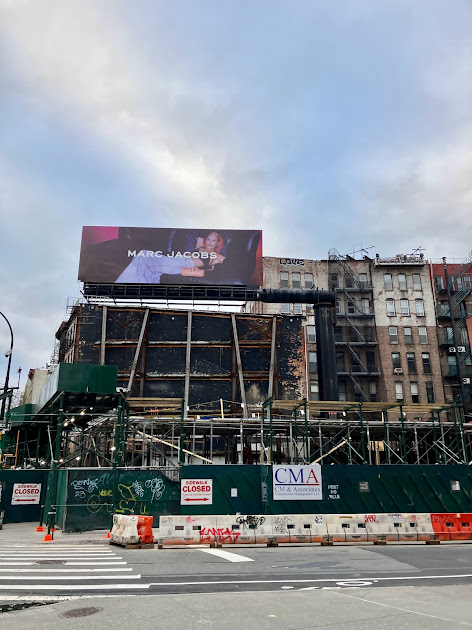 Since our last update at the start of the year, the framework for the first level of the future 21-story office building has made its debut on the SW corner of Fourth Street and the Bowery.
As we've been reporting, the 110,000-square-foot building — with ground-floor retail — is at the site of the former B Bar & Grill (1994-2020).
And before you know it, this will be here at the new address — 360 Bowery... 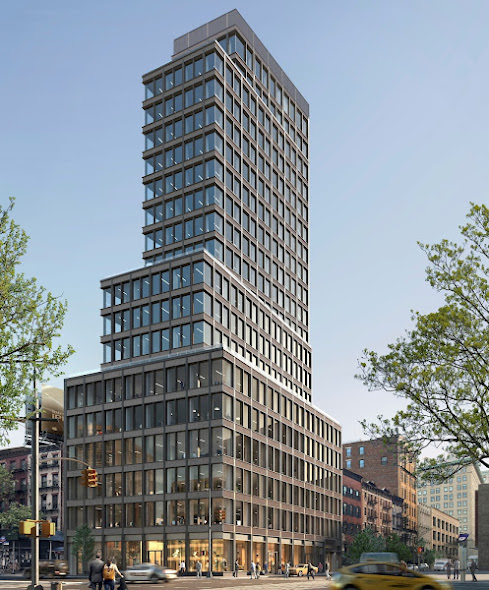 Here's more about the project via the website of architect Morris Adjmi:

360 Bowery is a contemporary reinterpretation of the traditional glass office tower. Standing taller than most nearby structures, the new commercial building's tiered volume subtly twists, drawing reference to the different scales within its historic urban-industrial context while also responding to the neighborhood’s newer additions.

Designed to maximize views, 360 Bowery's façade is essentially a field of openings. The custom-built, high-performance unitized curtain wall system features dark gray painted aluminum frames and blush-colored GFRC spandrel panels in a fluted pattern that gets tighter as it moves up the building. Single-pane windows, measuring roughly 5’x10’, are inset within 10” metal fins. These deep, dark frames add a layer of shadows, further articulating the façade. As a lighter counterpoint, the building's corners are open and airy with a structural joint hidden behind the glass.

Terraces are also a defining feature of the tower. While the building's massing was largely influenced by zoning restrictions, the tiered volumes create opportunities for ample outdoor amenity space with views north and east, looking out over the Bowery and onto one of New York City’s most dynamic neighborhoods.

As previously reported, CB Developers paid $59.5 million for a stake in 358-360 Bowery, a gas station before its conversion into the bar-restaurant. B Bar owner Eric Goode, who owns a handful of hotels, including the Bowery Hotel across the way, assembled air rights to build the more extensive development on this corner space.
As for the B Bar, the one-time hot spot (circa the mid-1990s) was expected to close for good in August 2020. However, the place never reopened after the PAUSE in March 2020.
We first reported on this project in January 2021. 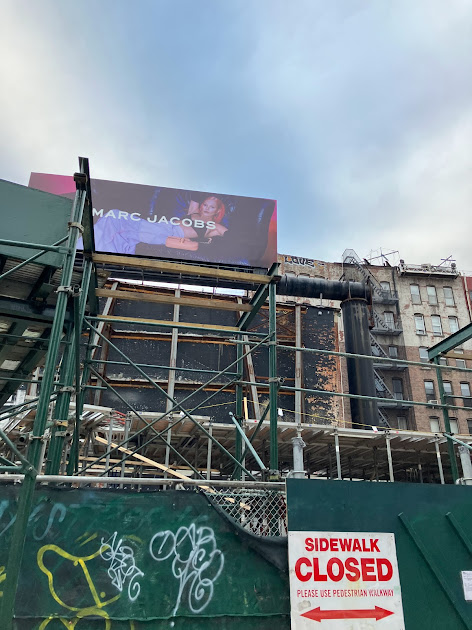 Email ThisBlogThis!Share to TwitterShare to FacebookShare to Pinterest
Labels: 360 Bowery, B Bar & Grill

vacant office space now at all-time highs, WFH/hybrid workplaces have become a permanent way of doing business. I get that this was planned before the pandemic, but it's like sleepwalking into a buzzsaw to start building a 21-story luxury office building in 2023. maybe they are playing the long game. it could be really long.

I would guess that since this a "brand new" office complex, it will be more suitable to the current trend of work/collaboration types of establishments. Plus the added benefit of being the "hood".

What can you do? Change is always going to occur regardless. I'm interested in seeing what types of businesses rent out this building.

That building's designed to maximize something, that's for sure.

Out with the old. In with the new.

The fact that the construction company building this monstrosity is able to close off the sidewalk on the Southwest corner of the Bowery and East 4th Street is a real problem for pedestrians. I walk by there all the time just to find the so-called pedestrian walkway they made up between plastic safety barriers to be blocked causing people to walk out onto the street and play dodge the cars and bicycle delivery men. I hope something is done to fix that situation before an accident happens.

What a bunch of corporate dreck...

I would suggest that the construction
company use quicksand instead of
cement for the foundation. It would
make the building more modern and
lovable.

Talk about meaningless and grossly out of scale architecture…just visual drivel. But it’s ok, our mayor “is Real Estate”.

I wonder if they've designed it for conversion to apartment rentals or condos, b/c as an actual office building, it's a waste of space and money.

Suggesting the foundation should be built on quicksand rather than cement is mean spirited and just really low. Wishing ill will against this building doesn't do favors for anyone. It's bad karma. Instead of griping about this, adapt, and learn to accept change.

That is just a horrendous building for that location. We don't need Midtown LES.

Learn to accept change? In this country we have the right to stand up to change when it’s not for better of anyone but one rich greedy landlord. If everybody thought like you things would be even worse.

This building is uninspiring, ugly and totally out-of-scale for the Bowery.
Eric Goode shame on you. You may be well-regarded in the turtle conservation arena but you certainly don't give a damn about preserving the history and culture our neighborhood.
In the end it's all about the almighty dollar. Aren't you wealthy enough without adding this monstrosity to our neighborhood?

Standing up to change is necessary and important during certain situations, but it won't alter the outcome and/or the construction of this building. Unless one has viable solutions to offer, becoming angry does more inner harm than good. What exactly do you propose to replace it?

Replace it with CBGBs. One two three four cretins wanna hop some more! 😊

What happened to the GREEN SPACE and BLUE SKY initiative that was to steer construction on the LES and EV?? Where ever you look? block after block of empty businesses and realty. Who will live here? Who is paying for this? Taxpayer subsidies?

it hurts my heart to see this