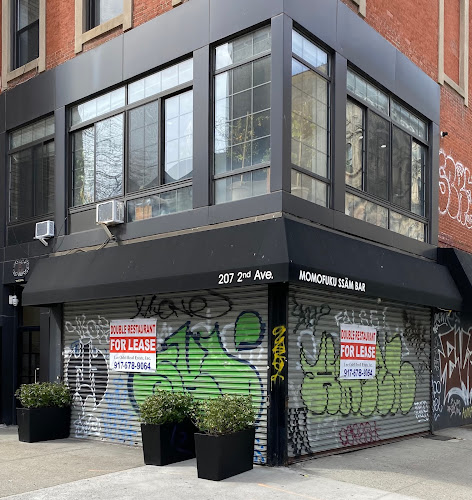 Junoon owner Rajesh Bhardwaj has reportedly signed a lease for a new Indian restaurant at 207 Second Ave. at 13th Street — the former Momofuku Ssäm Bar.
According to the Commerical Observer, Bhardwaj signed a 10-year deal for 5,500 square feet for his new concept, Jazba.
Per the CO:

Jazba will have a bar at the front of the restaurant, equipped with a craft cocktail menu, and two dining rooms serving recipes Bhardwaj picked up while visiting popular roadside eateries in India.

In May 2020, David Chang announced that he was moving the nearly 15-year-old Ssäm Bar from Second Avenue to the South Street Seaport. Milk Bar had retail space on the 13th Street side before moving across the street in May 2011. The cocktail bar Booker & Dax was then here until October 2016 before Ssäm Bar expanded.
This prime space had been waiting for a new tenant ever since Momofuku move on.
Photo from 2021 by Steven
Posted by Grieve at 8:00 AM

This is what, their 3rd attempt at 're-opening' in a new location? Do they think their absurd midtown prices will do better down here? Maybe they are hoping the congestion pricing gets shot down so they can go after the bridge and tunnel gang.

This one still hurts. But hopefully the new place will make new memories!

Seems like everyone sells "roadside" ethnic food these days.

Um, Junoon is quite possibly the best Indian restaurant in the city as evidence by their many accolades. Did you want another smoke shop?

This is fantastic, I cannot wait!

Did you want white washed pretentious food instead?

I like how the article mentions lawyers from big capital being involved and the 87k a month rent price. The fantasies of the ruling class are absolutely laughable. This neighborhood does not need any restaurants at that price point, let alone a Indian one. How many good, affordable Indian restaurants have closed here in the past 18 months?

If David Chang couldn't make the space work, why will this be different? How did Max Brenner and Michael White fare when they tried to open flagship restaurants here? Didn't Poiarkoff try to open a Marta here too?

David Chang chose to combine a bunch of his restaurants. You really think he didn’t make Mokofuku work on 2nd Ave? It was packed all the time lmao. And, Indian doesn’t work? Tell that to the Dhamaka and Veeray Dhaba teams, their restaurants are always filled. The ones that failed are the ones who put little effort into their food being good. Not hard.

The amount of people complaining about a restaurant opening, yikes. Maybe another smoke shop or a frat bar should have opened up instead? Seriously, step outside, it helps.

Rajesh should get out his tape measure. I don't see how this space is 5500 sf, as the entire 5-story building is listed as 11,000 sf. Maybe the square footage includes a full basement? How do you sleep at night if your monthly rent is 70k?