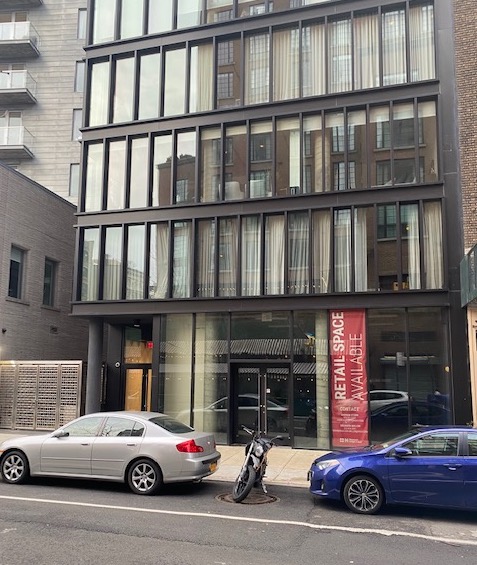 Photo by Steven
One of the city's next legal cannabis dispensaries is opening in April at 3 E. Third St., just east of the Bowery.
According to published reports, the dispensary coming to the ground-floor retail of this newish condoplex is Gotham, whose license holder is the nonprofit Strive, which "provides job training and other services to the formerly incarcerated." The organization was founded in East Harlem in 1984. (Strive is one of eight nonprofits in the state to receive marijuana licenses this past November.)
The location has reportedly drawn opposition from management at Project Renewal, which operates a men's shelter and an in-patient substance abuse treatment on the block.
Per NY1:

"Our clients come and go from this program on a daily basis," said Gabriel Woodhouse, program director with Project Renewal. "It's literally within sight line. I mean, it's right across the street from the front door of our program."

Technically, the restaurant Gemma and the Bowery Hotel is directly across the street from 3 E. Third St.
In addition, Community Board 3 passed a resolution stating that it would only approve the license at a different location. (This CB3 decision is only advisory.)
In any event, Gotham's management team wasn't having any of this. Joanne Wilson, manager of the project, told NY1 that they are moving forward with plans to open this spring.
As NY1 points out, the dispensary is subject to strict state regulations with limited signage (unlike the garish illegal operations), and cannabis products won't be visible outside the store.

I probably would not want to be handing cannabis products directly to someone in a substance abuse program, just doesn't seem like a good idea. But let's be totally real here for a second: no one is in a combined shelter/substance abuse facility because they got hooked on weed gummies

Brian, you are correct. However, some recovery programs advise "avoid people, place, things" while in treatment. Project Renewal said this is triggering and also reported there are some people in 60-bed OASIS program have stipulations on their parole saying they can be sent back to prison if caught using cannabis. More complicated than most people realize.

This is a weird location to be sure but there's "pot stores" on second ave right down the bock from the shelter that operate with impunity so what's the difference really? in fact a legal dispo "might" have more regard for those struggling with harder addictions.

Is this somehow more triggering than the bar at Gemma? Alcohol is a more damaging, more addictive drug

Support your friendly neighborhood weed dealer. You'll get better product for a lower price TAX FREE and you won't have to wait on line!