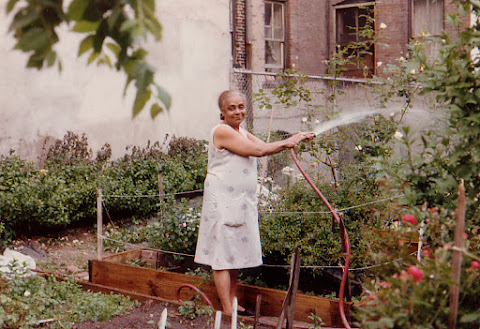 Alicia Torres, who founded the Esperanza Garden on Seventh Street and took part in the neighborhood's rent strikes in the 1970s, died on Jan. 4, five days away from her 99th birthday, according to her grandson, Marcel Torres.
At the time of her death, she was living at 219 E. Seventh St. between Avenue B and Avenue C — her home since 1975.
Here's more about her life via a tribute at Legacy.com:

Alicia Torres and her eight children moved to New York City in 1959. In 1975, they moved to the heart of the Lower East Side (Loisaida), 219 E. Seventh St., a tenement building, after being displaced from one dilapidated apartment to another.
Alicia had grown up on the island of Vieques; her family had been displaced from their land by the United States Navy in the 1930s and had suffered through the Great Depression, which made Puerto Rico the poorest country in the world at that time.

When the building (219 E. Seventh) was sold in 1976 to a real estate speculator who tried to collect rent while providing no services, Alicia decided she was tired of being pushed around. With the guidance of a community housing organization, Adopt a Building, the Torres family organized a tenant association and led a rent strike.
They collected the rents and started to make repairs and purchase heating oil. The landlord brought eviction proceedings in the Housing Court, but did not prevail as he failed to make the repairs that were ordered by the judge. Conditions were harsh, however, and most of the tenants gradually moved out, leaving the Torres family members occupying eight of the twenty-four apartments.
In 1975, the building next door (223 E. Seventh St.) had a devastating fire. The City demolished the building in 1976 and the resulting rubble lot attracted neighborhood drug dealers. Some neighbors at this end of Seventh Street met with Alicia Torres and her family and together they started to clear the lot of the bricks and debris and planted sunflowers. It was backbreaking work, but soon the lot started to look more like a garden than a rubble lot.
In 1979, the East Seventh St Block Association was granted a lease by the City's Operation Green Thumb and a fence was erected to protect the garden. Green Thumb delivered truckloads of fertile topsoil from upstate and soon after that, it wasn't long before the garden members, many of them 219 residents, were growing vegetables, flowers, and shrubs. Trees and rose bushes were planted and the garden became a magical space for East Seventh Street residents, especially children.
On weekends, the garden would be full of people working, talking, cooking, and kids playing. It was an island of beauty and harmony amidst a gritty urban landscape.

Photo of Alicia Torres in Esperanza sometime in the late 1980s courtesy of Marcel Torres. You can read more about what happened to the garden here.
Posted by Grieve at 6:00 AM

Thanks for reporting Grieve. What a great personal history and neighborhood champion.

R.I.P. and Thank You Alicia Torres for all you did for your neighborhood!

RIP! thank you for the garden! and thank you, grieve, for reporting! i never knew the story behind this leafy beauty!

She was a true working-class hero. We owe her gratitude, admiration, and an obligation to preserve her memory and continue fighting for her cause.

She is the very definition of a true New Yorker.

Thanks for sharing this. I live on 7th across from this. RIP sweetheart xo

Wow! What a story! I sometimes wonder about how many people have worked to sustain their neighborhoods like this, largely unknown to the people who come in decades later to enjoy them.

This a really well-written and interesting obituary. It's not often that you read an obituary and want to keep going but this one definitely did that for me. Kudos to whoever drafted it. She sounds like a pretty incredible woman.

God bless you for all you did, Alicia Torres! Rest in peace - well deserved PEACE. You were a blessing to this community.

THIS is what commitment looks like; she toughed it out and never threw in the towel (even though there must have been times when she wanted to).

BTW, to everyone who thinks 'protesting' means carrying a sign for a few hours, please study Alicia Torres' life! Effective action requires ongoing determination even when the deck is totally stacked against you.

RIP. The garden is beautiful. Thank you for your good work.

Well said! The life of community heroes should be part of the curriculum of our local schools to pass the experience on.

Thank you!!! Beautiful individual and love for humanity. Continue the legacy by supporting open spaces.

I’ve often wondered what the story was with the garden. Now that right there is a stellar life!

Back in the day this was the norm, gardening in the EV in the middle of burnt out and crumbling buildings that landlords set alight to collect the insurance money. Though Punk Style was the fashion of the time in the late 70's there still existed a big hold over of hippies who grew their vegetables and edible flowers. Adam Purple was so devoted to his garden, spanning in the end almost 15,000 Sq Ft, he would make daily bike trips to Central Park to collect horse manure to use as fertilizer. All this in an area that resembled a a war zone that had been flooded with hard drugs openly sold on the streets and in holes the walls inside abandoned buildings. It wouldn't be uncommon to see ladies in summer dresses and hair done in a retro 50's style strolling about the rubble strewn streets. Such a weird, weird time.........

The last time I saw Alicia, she was sitting in her kitchen window and said hello; this was maybe in January or February. I always looked for her when I passed her building, and she always asked me about Aresh [Javadi, co-founder of More Gardens.]

I told her I loved her.