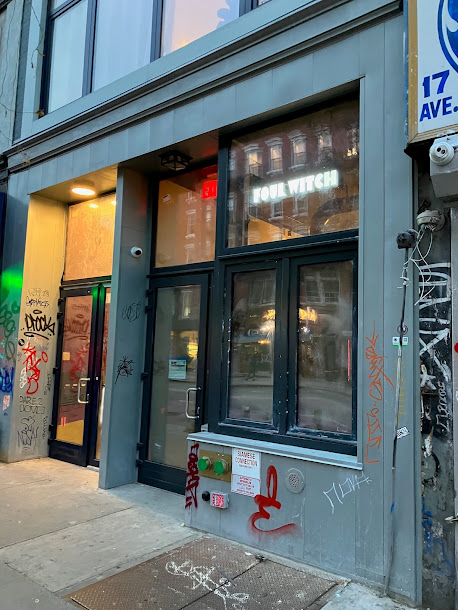 Foul Witch is the name of the new wine bar-restaurant concept from the Roberta's team, opening soon at 15 Avenue A. (Updated: now open. Here's an Eater review.)
Signage is up now in the window here between Houston and Second Street. An EVG reader also spotted an Instagram account for Foul Witch.
The team behind Roberta's and Blanca, Carlo Mirarchi and Brandon Hoy, had previously unveiled plans for a new establishment at the address. (First reported in September 2019.)
Foul Witch isn't a new name for the two: In May 2018, they unveiled Foul Witch by Blanca as part of the Frieze art fair at Randall's Island Park. As Eater reported at the time: "The 70-seat restaurant will have an all-day menu of natural wines and dishes like wagyu tartar, scallop ceviche, and a double cheeseburger."
Community Board 3 approved a beer-wine location for the ground floor last September. The minutes from that meeting show that the unnamed (at the time) establishment would have 12 tables and 44 seats with one 12-foot L-shaped bar with four chairs. Hours of operation were listed as 11 a.m. to midnight, with "Italian food prepared in a full kitchen, serving food during all hours of operation, no televisions, and ambient recorded background music."
As we've been reporting, the building received a vertical extension with two new floors, moving from four to six, dating back to 2020.
No word on an opening date for Foul Witch, which currently has some help-wanted listings posted. The EVG reader also saw workers loading food from a Roberta's truck yesterday morning.
Posted by Grieve at 5:00 AM

Sounds like this will be a good restaurant, but wow what a wretched name!

Right! Stupid name. Why not just put in a Roberta’s? Their pizza is good.

I saw the new sign yesterday and blinked at it for a while, thinking I must have misread it. Strange choice for what sounds like it's aiming to be a pretty bougie place...at least Sour Mouse is trying to be divey.

"This house has a lot of unpleasant happenings. In '59, a dead infant was found, wrapped in newspaper in the basement."

"Mmm, you really rouse my appetite!"

"Have some more wine."

Roberta's is awesome, this could be a great addition to the neighborhood!

Trying to find info on said dead infant. No luck.

Has it really been 10 years since Natori closed? Is there anywhere else to get alligator? sigh.

was just looking up what "wagyu tartar" is, from Eater's mention of what Foul Witch served when they did the pop up appearance at Frieze.
made me think of Natori wani.

I love the name, but anyplace serving raw beef is a place I'll be crossing the street to avoid!