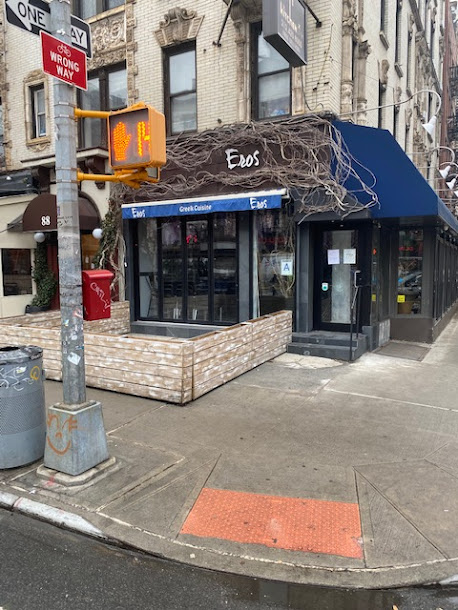 Photos by Steven
An item from earlier this week... Eros, the Greek restaurant on the NE corner of Fifth Street and Second Avenue, is entering its fifth month of what is billed as a temporary closure.
Meanwhile, the Department of Transportation has noticed... and issued a "Termination" notice for the restaurant's lengthy curbside dining structure... 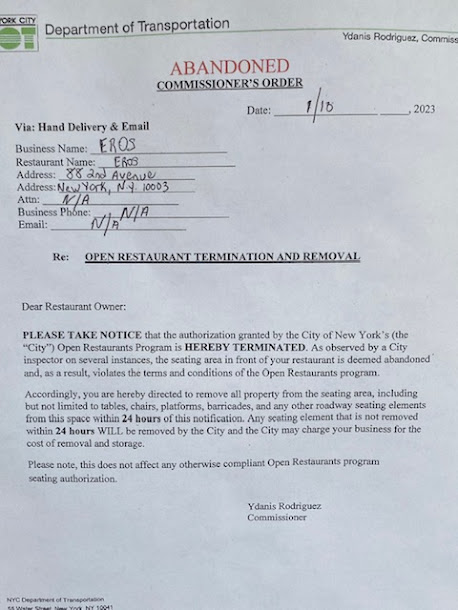 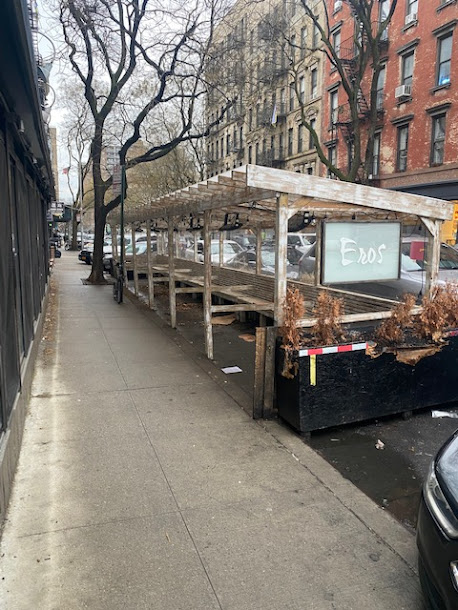 We previously spotted a letter here from the DOT dated Sept. 6 requesting that ownership correct some deficiencies in the curbside dining structure.
Eros took over for the diner the Kitchen Sink in September 2021 (same owners) ... management previously changed names from Moonstruck to the Kitchen Sink in the fall of 2015.
The Eros website still notes that this location is "closed for renovations. Reopening TBA." We had not seen anyone inside the space since the restaurant went dark in August.
Posted by Grieve at 10:00 AM

The infinite laziness of those who put up these dining sheds: first, take public property for free for several YEARS.

Then when you can't be bothered, just walk away and stick the taxpayers with spending MORE tax dollars to dismantle & take away that shed.

I wish the city would give ME, as a taxpaying citizen, service that accommodating! Can I renovate my apartment and just put my debris blocking the parking land AND have NYC cart it all away for free? NO, I'd get a huge FINE if I tried to do anything like that, and so would every other ordinary citizens!

I find myself continually annoyed when I witness closed restaurants yet there is still a dining shed present. They need to be demolished if no one is going to maintain them and remain responsible for being open to the public. This is good news. I hope more are taken down.

Walk by it a lot, never any activity. Up until a few months ago The Kitchen Sink was still operating as take-out/pick-up only from the 5th Street entrance with the same old menu. But now it's all dark.

It's about time. Several residents have reported the fact that the restaurant has been closed for months and asked that the shed be removed to no avail.
The wheels of action grind very slowly in NYC.

I reported this shed a couple of months ago. The reply from 311 was that DOT inspected it and no action is to be taken, that it was in compliance. Suddenly it is being removed! On the other hand I recently reported 80 and 82 St. MARKS and the replies were they were ordered to be removed. Well, they're still standing! Not worth the effort to report as far as I'm concerned, city has not procedure even if they say they do.

I was hoping that they would reopen as the original dinner either as Moonstruck or The Kitchen Sink and hopefully forget about that poorly thought-out and overpriced Eros restaurant the owners tried to operate there. I ate in the dinner all the time and they usually had a good number of patrons there. The outdoor shed should also be removed as they have enough room inside the dinner for their customers.

82 St. Mark's Place is outside Theatre 80, and they use the space for William Barnacle Tavern. I think 80 is that bowl place that closed — that needs to go.

This was a great restaurant when it was the kitchen sink.

There was a notice from the city posted on the door of the closed bowl joint months ago that the city was going to take down the deserted shed. Hold your breath…

There is another huge empty shed at 119 1st Ave (btw E7 and St. Marks) that has been sitting with construction materials in it since at least September. Plus it is built across 3 unrelated building fronts. DoT keeps closing the 311 request saying that its in compliance.

Took them long enough!!!! They left barely any space on that busy sidewalk with that shit.
Not to mention the one in the street.

Businesses should be charged for these removals.

Agree! Charged for the removal and for every one hour they occupy public property beyond authorization. Fill the city coffers so that needed expenses can be taken care of.

So much anger towards these abandoned dining areas, but the sad bigger picture here is all those empty store fronts. The EV will look like the city back in the early 80’s, all the neighborhood needs to complete that look is a burnt out car on cinder blocks.

Anon @ 6:10 First and Second Avenues did not have burnt out cars on cinderblocks or loads of empty store fronts in the early 80s. For that you had to go east of Avenue A or really Avenue B. The neighborhood was vibrant, diverse and full of Mom and Pop businesses and restaurants. There was a lot more going on then than now.

@11:55 am, correct, but we did have our drug dealers on First Ave who were always getting into arguments and were seemingly invisible to the police