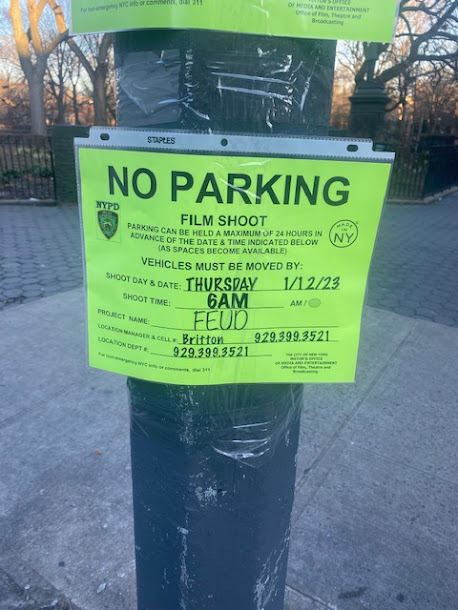 Crews will be out tomorrow around Avenue A, Seventh Street and elsewhere to film scenes for the second season of the FX series "Feud: Capote and the Women" ... 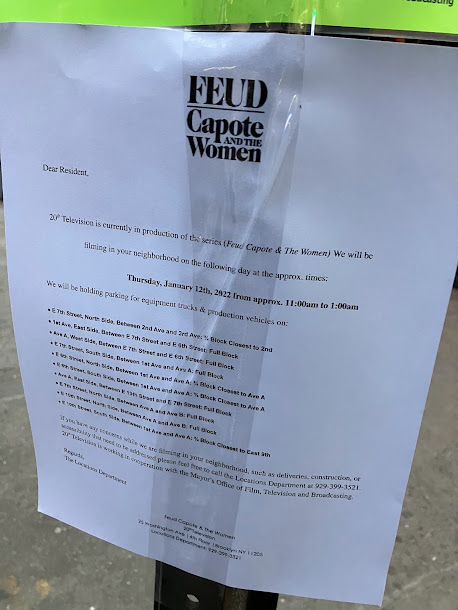 According to Variety, Ryan Murphy's anthology series "follows the true story of how Truman Capote (Tom Hollander) was friends with numerous members of New York high society until he published excerpts of his unfinished novel 'Answered Prayers,' with the excerpts serving as a tell-all about the city's elite."
The cast includes Demi Moore as Ann Woodward, Diane Lane as Slim Keith, Calista Flockhart as Lee Radziwill, Naomi Watts as Babe Paley, Chloë Sevigny as C. Z. Guest and Molly Ringwald as Joanne Carson. Gus Van Sant will direct all eight episodes.
The entertaining first season of "Feud" from 2017 followed the relationship between Joan Crawford (Jessica Lange) and Bette Davis (Susan Sarandon) while filming "What Ever Happened to Baby Jane?"
Also filming! A show that needs no introduction — "Law & Order SVU" ... we spotted signs along Third Street and Avenue A... 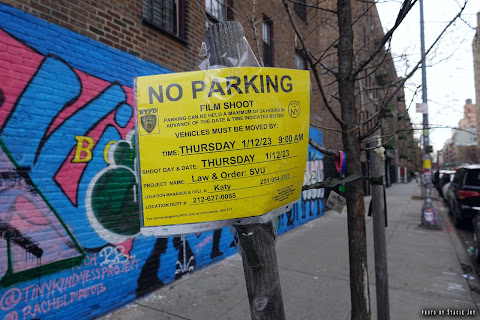 Thanks to Steven for the "Feud" pics; Stacie Joy for L&O SVU.
Posted by Grieve at 11:00 AM

Wow, quite some star power - but Molly Ringwald, back in her old 'hood!

Our 7th street is beloved. I've happily lived here since 2010 and have witnessed its renaissance with how more people have flocked here for its culture and energy with unique bars and restaurants and shops. I've never seen so many shows, movies, commercials, and projects being shot in just one particular area. It is special and ornate with the park, the diversity of residents, its history, architecture, and tight community without any of it being totally homogenized like other areas in Manhattan. It evokes a tony, quintessential New York street. My buddy is a freelance producer here in the city. Both him and his colleagues refer to E7th as Hollywood EV. This last year he worked on AHS NYC and Russian Doll including the Marvelous Mrs. Mazel and FBI, Law and Order, and another pilot which didn't get picked up, all of which are on 7th and around alphabet city. Now he is returning again for an untitled, independent movie directed by a big name actor in the spring, where guess what, it's being filmed on 7th street along Ave A and B and C. E7th is where the action is at kiddos.

Yep. City cleans-up financially off the back of our neighborhood, and meanwhile, lets the park (located right on said street) rot away.
At least they're keep'n it real.