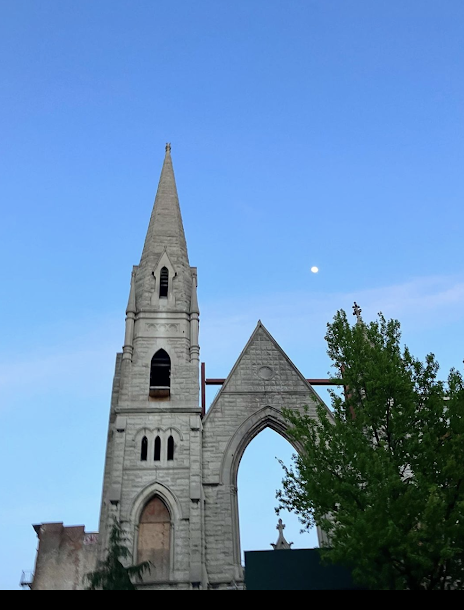 The Landmarks Preservation Commission (LPC) voted this week to allow the demolition of the remains of the fire-damaged Middle Collegiate Church at 112 Second Ave. between Sixth Street and Seventh Street.
Church leaders made the announcement via Twitter...

INCREDIBLE NEWS! The NYC Landmarks Commission has voted to allow @middlechurch to remove the burnt remains of our facade, so we can rebuild on our historic site.

Truly, God is good. Out of this fire, fierce love is rising.

LPC members voted 8-2 in favor of the demolition.
As previously reported, church leaders said they must remove what remains on the property within the East Village/Lower East Side Historic District. According to a report commissioned by church leaders, the culmination of an 18-month review, there is too much damage to the existing structure to integrate it into Middle Collegiate's new home, that it wouldn't withstand a full-scale rebuild on the property.
In a November interview with EVG, Rev. Dr. Jacqui Lewis, senior minister at the Middle Collegiate Church, said they spent $4 million to reinforce, stabilize and weatherproof the façade in the months after the devastating December 2020 fire.
She said that despite these efforts, the façade has deteriorated over time. And then, their engineering report showed that it would be best to remove what was left before building a new church.
"It felt like something died," Lewis said of hearing this news. "The building burning felt like a death — a big death. This makes me feel heartbroken. It feels like a second loss. But if we let it go, we could get back on site, get back in the space and build something."
Preservation groups, including Village Preservation, had urged the LPC not to grant permission for demolition until further studies could occur. According to Village Preservation: "We don’t believe there is sufficient documentation that alternatives to preserve the historic façade have been fully explored, nor that there is sufficient evidence at this time to justify the permanent and irreversible removal."
Lewis previously stated that she understood the opposition.
"We relive the fire daily and try to think about what to do with it. It's that kind of grief that just keeps coming in waves," Lewis said. "At some point, two years in, I want to be able to say to my community: We did the very best we could with this. This is not a willy-nilly, hurry-up decision. The engineer says we can't keep it, and we're heartbroken."
No word just yet on the timing of the demolition.
Meanwhile, Middle Collegiate leaders continue fundraising efforts to rebuild a new church here in the East Village. They are holding services from their temporary home — East End Temple, 245 E. 17th St. between Second Avenue and Third Avenue.
EVG photo from May 2022.
Posted by Grieve at 6:00 AM

$4m pointlessly down the drain because of misguided activism. They should get a refund from Village Preservation.

Glad to hear the Church won this battle against Village Preservation. 7:58am is spot on that the Church should get reimbursed for those absurd expenditures.

The church tried to preserve the facade because they wanted to incorporate it into a new church building. Not because a preservation group told them to.
Guessing the money came from insurance companies.

This fire was the event that finally broke me after months of the pandemic. After all the suffering, loss of life, loss of jobs, stress from everything that was going on, I managed to hold it together until this. When I woke up that morning to the news, I just cried. I'm not even a member of this church - or any church - it was that this church represents so much for our neighborhood and beyond.

I was hopping there was a way to keep the tower, and am heartbroken that it cannot be saved. I hope the congregation can heal and rebuild as best they can.

WOW. After two years, there is finally some movement and resolution for this space. It's time to rebuild and make it better. The question remains how long this will take and how much?

The church did absolutely the right thing to spend the money to stabilize the facade and tower in the hopes of incorporating it into a new structure. They did this with the best of intentions. It's very sad that the intent could not result in a successful saving of the facade and tower, but they had to try. Now we can hope that the church will build a contemporary building that will continue to serve the community with the elegance and grace that the former did.

I’m a member of the church who spoke in favor of facade demolition at the Landmarks hearing in November, so I’m pleased and relieved at the outcome. But I felt a wave of sadness at the news, which reinforces that our beloved church sanctuary is gone. It is the right choice and I look forward to the church creating a new home that continues to welcome everyone in and be part of the EV community.

Too bad none of the ultra-rich who can afford a $90 million condo in Manhattan bothered to chip in to save this façade - it would have been literally pocket-change for them to have helped.

Another piece of NYC history gone, and we won't get any glorious architecture to replace it, that's for sure.

Good luck to the congregation.

How are you so sure? And the engineers said that no matter the money you throw at it, it wouldn't survive reconstruction. Stop the class warfare and just be happy that the church folks are happy and trust them to build and equitable replacement.

It's going to be a very sad day when the facade finally comes down. But, I'm thrilled to hear that the church can rebuild and the parishioners can start the healing process.

Thanks for correcting facts, when others jumped to unwarranted conclusions.

I'm genuinely sad & sorry for the loss of a very beautiful church and its façade, the likes of which we will never see again. And it is a true loss to this community in every way, b/c it was a visually gorgeous façade that withstood the test of time (but sadly, not the test of irresponsible neighbors - who have still not taken one iota of responsibility for what their fire did to that church).

Middle Collegiate was built at a time when people took fierce pride in what they built, and we don't really have that now; everything is cookie-cutter and disposable.

Dunno what’s in the plans, but I wonder how much of the facade can be salvaged and potentially incorporated into a new structure. Maybe not every brick and stone, and definitely not the mortar, but if a new facade could be built that was reminiscent of the old facade, using as many old materials as possible, maybe that could be a compromise. Keeping history as intact as reasonably possible is great, but maybe something like this could be a compromise - traditional feel, modern structural stability and fire resistance.

We lose too much history, to development, & not just the original Penn Station! We travel to Europe, to enjoy medieval towns, & structures, but our own history, gone in a blink of an eye!