Sealing up the former Charas/P.S. 64 on 9th Street 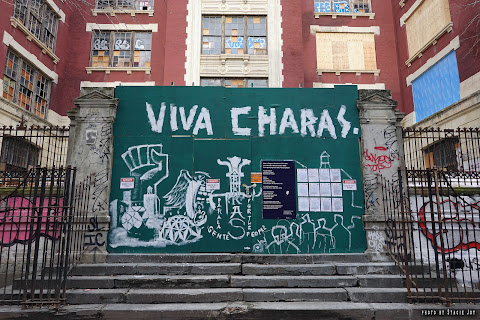 On Dec. 20, a crew arrived with pallets full of construction materials for emergency work at the long-vacant former P.S. 64/Charas/El Bohio Community Center., 605 E. Ninth St. between Avenue B and Avenue C.
Since then, readers and residents have noted a lot of activity on the property.
EVG contributor Stacie Joy took these top three photos on Jan. 5, when workers said they were "sealing this place up." 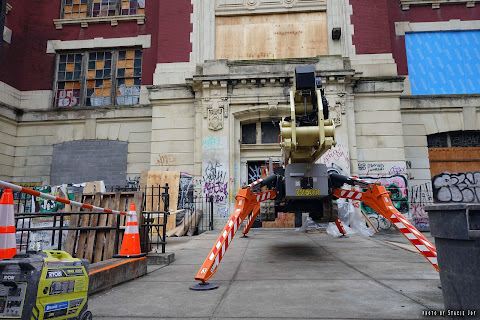 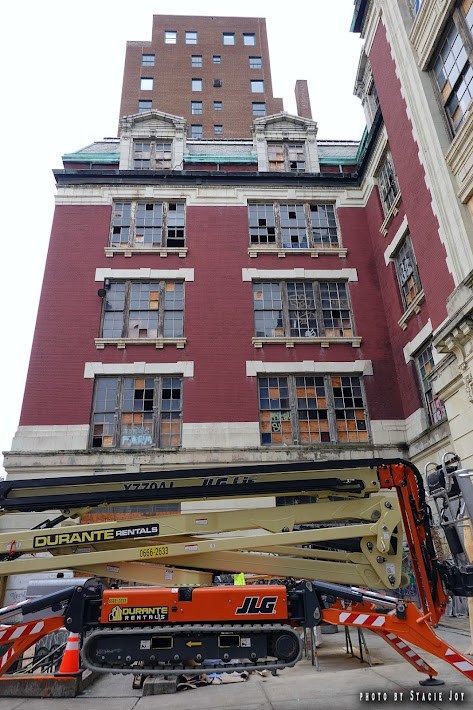 As of Monday, the windows and entrances on the Ninth Street side have been covered... 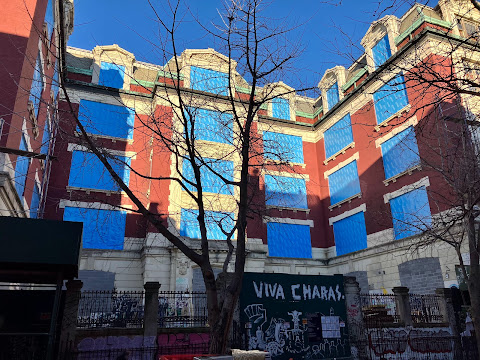 ... and similar work looks nearly complete on the 10th Street side... 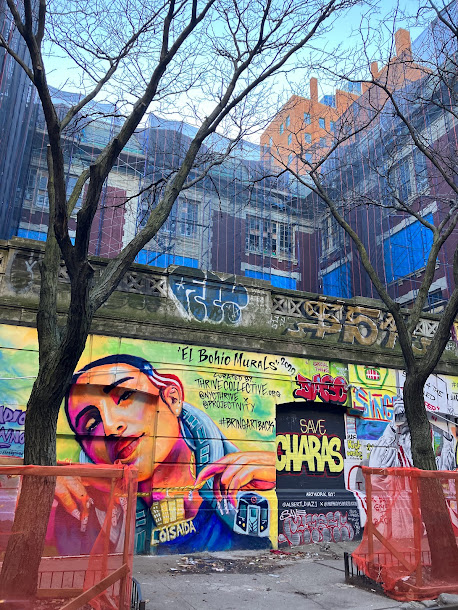 Afterward, the property will likely sit in limbo for a little longer.
At the end of 2022, news broke that Gregg Singer's nearly 23-year tenure as building owner had come to an end.
On Dec. 23, New York State Justice Melissa Crane ordered the foreclosure and sale of the building with a default, including penalties and interest totaling approximately $90 million. (You can read Crane's 20-page decision and order here.)
The order could send the property back to auction within 90 days, according to members of Save Our Community Center CHARAS/former P.S. 64 (SOCCC-64).
The property that Singer purchased from the city in 1998 for $3.15 million fell into foreclosure last year and is reportedly back in the hands of lender Madison Realty Capital. As The Village Voice reported: "Madison Realty Capital declined to comment on the foreclosure or what plans it has for the building."
The five-floor structure is currently being offered for use as medical space or educational-related purposes. You can find the listing at Corcoran here. (Aside from the efforts to seal up the building to ward off intruders, thrillseekers, and the elements, the long-standing Stop Work Order and Full Vacate are still on file with the department of buildings.)
It's important to note that the 135,000-square-foot building is zoned for "community facility use." Any conversion to a condoplex or residential housing would require a time-consuming zoning variance.
Meanwhile, some residents want to see the space used again as a community center, as it was during its time as Charas/El Bohio Community Center. Singer evicted the group on Dec. 27, 2001.
Through the years, Singer wanted to turn the building into a dorm (more here), though those plans never materialized. (At one point, the Joffrey Ballet and Cooper Union were attached to the project.)
In October 2017, then-Mayor de Blasio's statement at a Town Hall put forth the idea that the city would take steps to reacquire the building. According to published reports, the Mayor said he'd work to "right the wrongs of the past."
SOCCC-64 members hope that Mayor Adams considers this request. Per the group's press release after the judge's decision: "We are excited to finally have the opportunity to return the building to full community use, and are ready to work with Mayor Adams to restore this once vibrant community hub," said Chino Garcia, co-founder of Charas.
As The Village Voice pointed out, "exactly how a CHARAS-like community center might be restored to P.S. 64 is hard to say, given the tremendous debt that Singer leveraged on the building, and the cost to renovate a building left to rot for two decades."
Posted by Grieve at 5:20 AM

Susan Sarandon and others raised money and saved St. Brigid's Church in the past. Does anyone believe that Mr. Garcia's group can get and restore the building with no money ? ABC NO RIO has 10 million in the bank for construction of a new building and that project seems to be stalled so why does anyone believe Charas can do anything with no money ?

wtf? how do you own $90 million on a building you bought for $3 million?

That 'sealed up windows' look is so awful.
Brings back memories of the 1970's EV when so many building were abandoned or burnt out. A very definite 'depressing feel' for the neighborhood.

The sealed windows should help to keep the elements out including flying creatures and those with two legs and a syringe.
As I understand it the building is the property of a financial institution,,, so it is very unlikely it would be returned to the "community" for use by the community, ever. My most optimistic dream would be at the very least a landmark protection due to the buildings Beaux Arts architecture.

The one thing you can be sure of is that Eric Adams will do absolutely NOTHIING to help this building be re-directed for any kind of community use.

Charge former owner Singer for depriving the neighborhood of its community facility, levy fines for 20+ years of usage violation in the amount of $90+ millions, charge Madison Realty, as current default owner, for reparing the rot, take the building back per eminent domain. Write laws and enforce laws that serve the community and not merely deep-pocketed, politically connected, lobby-experienced profiteers. End 20+ years of racist withholding of this once wonderful, Puerto Rican grassroots-led cultural center. Repair, revive, renaissance for our community.

try reading the history in the links above

With the zoning restrictions in place, no one will buy the building. It will continue to decay until it will be torn down.

Re 2:31: To prevent this from happening and to return the building to deed-conform use, eminent domain might be the best answer. Deed violation has continued for over two decades. This is intolerable; it need to be brought to conform to legal requirement.

Eminent domain is not going to happen as the City most assuredly will not pay market value, currently estimated at $126 million, to Madison Realty. The only requirement of a landmarked building is that the facade cannot be changed. The interior obviously needs demo and rehab work, and a variance granted, and of course a boatload of money to polish this turd of a building and turn it into a diamond. Madison has got everyone by the balls and they're not going to let go until somebody coughs up the Money.

Eminent domain means the city would have to buy the property, and for a lot more than it was worth decades back

Interesting discussion. If I understand correctly, Guiliani auctioned a building off for $3 million that would be on the books now for $126 million? But how does the violation of the deed figure in all of this? Violating the deed, violating the benefit of a whole community has an exorbitant price tag that the wannabe profiteers ought to be charged with. 20 years of deed violation would easily exceed $126 million. This kind of 1000s of people who were prevented the deeded community use. The city needs ti claw it back along with extra money for future programing. Luckily, Madison Reality has more than enough assets that can be taken to cover it all easily. Come on, let's have some imagination. Let's hold our elected politicians accountable to govern according to the benefits not of a few rich leeches but to the benefits of the community!

Good luck getting hold of the new mayor! He’s too busy posing for the paparazzis.

Eminent Domain does NOT require a municipality to pay "market value" when seizing a property for public use. The city could have done so at any time over the past 20 years when it was clear that Singer was going to do NOTHING with the building except allow it to rot.

Madison Capital can simply write off any loss on its books against other income it receives, thereby enabling them to pay less income tax for that year.

The city DOES have the funding AND the manpower to restore that building. It's called the School Construction Authority. They build, retrofit and restore school buildings all over the city. They do so all year, every year, and each community benefits. The city needs to stop wasting time and get that ball rolling NOW. Plenty of kids would be well-served by another school building here.

Of course, that would require a mayor and city councilmember who gave a damn.

Right now, we have NEITHER!

I think we might have a realistic shot at funding from a portion of the very big bucks that tech titans are contributing to efforts to address the Climate Crisis, if urban planning here is approached with the declared goal of turning Alphabet City into a comprehensive, full-featured, leading-edge, iconic "Prototype Green City Retrofit" demonstration model, building upon the existing strengths of the neighborhood's rare concentration of community gardens, abundant bicycle docks and proximity to the L train, and its historic reputation as a creative bohemian enclave. Larger political constituencies will appreciate its potential value to the rest of Manhattan and the metropolitan area as a tourist attraction.

That colorful bohemian reputation is clearly important to the local economy as a whole: a magnet for tourists to continue coming to this destination, where they will patronize assorted businesses like boutiques and restaurants and nightclubs and cafes and art galleries. Worrisomely, its vibrancy has been eroding over the decades as rents became increasingly unaffordable, with many regarding Greenwich Village today as little more than a gentrified and commodified shell living off of the reputation of what it once was. I think it can fairly be said that Alphabet City and the few blocks surrounding its borders are the last surviving authentic bohemian neighborhood in Manhattan. Let's keep this unique cultural asset going, make it more sustainable, and try to give it an infusion of young blood.

What is especially interesting about the CHARAS situation is that it presents a unique opportunity, not just to celebrate the neighborhood's storied history but to revitalize Alphabet City as a sustainable 21st century creative enclave by adding supportive facilities most neighborhoods do not have, with a cascade of beneficial effects for the community and the city as a whole. The CHARAS building gives us a chance to do something meaningful to give this neighborhood ongoing relevance to the pressing issues of today and “pass the torch” to younger talents in the up-and-coming new generation of idealists that has arisen in response to the existential threats the biosphere is facing.

Restored as a hub of living alternative culture, CHARAS is big enough to host multiple attractions and offer a variety of substantial facilities that can catalyze creative productivity. It is a once-in-a-lifetime opportunity to meaningfully anchor such an attempt at setting a tone for the future of the neighborhood.