Gregg Singer's reign as owner of the former of P.S. 64 is said to be over 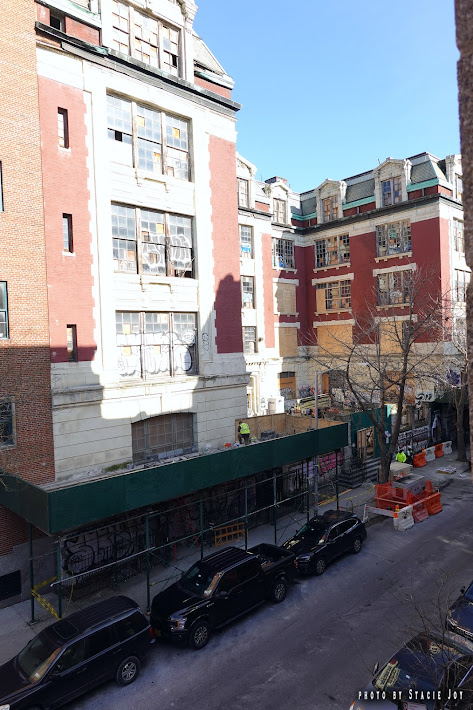 Photos yesterday by Stacie Joy
Gregg Singer's nearly 23-year tenure as owner of the former P.S. 64 on Ninth Street has apparently come to an end.
According to a press release from members of Save Our Community Center CHARAS/former P.S. 64 (SOCCC-64), Singer has been found in default of his mortgage and the property has been foreclosed.
Last Friday, New York State Justice Melissa Crane ordered the foreclosure and sale of the former P.S. 64 at 605 E. Ninth St. between Avenue B and Avenue C with a default, including penalties and interest totaling approximately $90 million.
The order could send the property back to auction within 90 days, according to SOCCC-64. You can read Crane's 20-page decision and order here.
The property that Singer purchased from the city in 1998 for $3.15 million fell into foreclosure earlier this year and was reportedly in the hands of lender Madison Realty Capital.
The five-floor building is being offered for use as medical space or educational-related purposes. Meanwhile, some residents want to see the space used again as a community center, as it was during its time as Charas/El Bohio Community Center. Singer evicted the group on Dec. 27, 2001.
It's important to note that the 135,000-square-foot building is zoned for “community facility use” and any conversion to a condoplex or residential housing would require a time-consuming zoning variance.
In October 2017, then-Mayor de Blasio's statement at a Town Hall put forth the idea that the city would take steps to reacquire the building. According to published reports, the Mayor said he'd work to "right the wrongs of the past."
SOCCC-64 members hope that Mayor Adams considers this request. Per the group's press release: "We are excited to finally have the opportunity to return the building to full community use, and are ready to work with Mayor Adams to restore this once vibrant community hub," said Chino Garcia, co-founder of Charas.
Singer wanted to turn the building into a dorm (more here), though those plans never materialized. (In past years, the Joffrey Ballet and Cooper Union were attached to the project.)
Meanwhile, work continues at the site. As we first reported on Dec. 21, workers arrived at the site ... 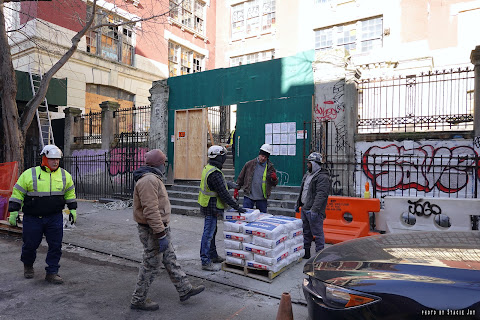 A worker on the scene told this to EVG contributor Stacie Joy yesterday: "Our job is to completely seal up the building. It's dangerous in there." The long-standing Stop Work Order and Full Vacate are still on file with the department of buildings.
For a detailed history of Singer and the space, you can check out this article at The Village Voice.
Posted by Grieve at 5:30 AM

Again. No local elected will provide figures of what the building’s buy back cost is ($90 million?). Renovation costs ($50+ million). Cost of annual operations ($5-7million?) And compare it to badly needed services in our district. But do go ahead stir up needless interest in this.

I'm right across the street on the 9th street side so I get a front row seat at the current state of the building. This building is such a mess. You can see holes through the walls and ceilings on multiple levels. I can't imagine what the plumbing and electrical system looks like. It's going to take a ton of money and time. I don't know how the current building can be advertised to any sort of investor. It's very sad to see what has happened. As for the workers, I can only guess they are boarding up the entrance and windows but they have brought a ton of supplies. They start around 6AM every morning but I haven't seen much progress in their work.

Yes, it will always cost a lot "to right the wrongs of the past". It won't be cheap to clear up the racist mess caused by decades of Guiliani & Bloomberg reign. Madison Realty should be held accountable for having financed Singer. Now that the property fell to them, so ought to be all liabilities. 20+ years of violating the property's dead for community use should be translated to reparations at the tune of millions of $ a year during each of which a generation of youth, of artists, of ordinary residents where deprived of their cultural center. The clock is ticking. We want our center back now.

A nursing home for rehabilitation would be great!

A corporation will buy it or win it through an auction. It will be torn down to make way for housing. Most of it expensive, a sickly small portion will be affordable and 30 years from now no one will remember anything.

The most likely outcome is that the building will be condemned. You don't really come back from pervasive holes in the structure.

Now hermetically sealed. Who knows WHAT will happen next?

I STILL say that the city can grab it through Eminent Domain and then have the School Construction Authority turn it back into the Public School it was built as. They already have the funds,
the work force and experience.

Whatthefuck is there to wait for??

It is difficult to predict what will occur, but I am glad it is out of the hands of that odious man. This property has been contentious for decades. Let us hope at this holiday season we can join together to realize the new opportunities that are presenting themselves.

It's understandable that people can have different preferences when it comes to architecture and the appearance of buildings. Some people may prefer the charm and character of older buildings, while others may prefer more modern and sleek designs. Ultimately, it's a matter of personal preference and what works best for the community and the specific location. It's important to consider the cultural and historical significance of a building, as well as its functional needs, when making decisions about its future

Singer was a zealot, Madison Reality is only interested in their bottom line. State Governor Hochul could declare the building blighted, clear the way for eminent domain. If she does that with the drab but busy Penn Station, there is multiple times more cause here. It's a political decision. City and State owe it to correct the wrong. Hold the politicians accountable. Watch their action more than their words.

An Eataly would be nice

Seeing as Adams is as shameless a shill for the real estate mob as DeBlasio was, I won't expect anything decent to come of this. Probably, Extell will get a big tax break for building a tower with 100 unrenstable units and three "affordable" ones. But maybe, just maybe, some kind of Christmas miracle might happen?

Eminent Domain is a pipe dream. The City sold the property 20 years ago and have been fully compensated for it. If they didn't want this pile of a shit of a building then, they won't want it now as it's condition is exponentially worse. I'm quite sure that rather than investing $50 to $ 100 million in this rehab the City would prefer a developer to build the most profitable thing possible and then the City gets to collect the tax revenue for the foreseeable future.

Letting the building rot and go on used for so long is a violation of the deed. The owners ought to be held accountable for this and properly compensate the city and community for the losses incurred. This compensation can cover rehab after eminent domain. Watch for Governor Hochul's court appointments and the legal doctrines they represent.

That bldg is such a disaster knock it down….

The wishful thinking cosplay is really funny to see.

The building is Landmarked. It was once a school return it as a school.

The problem with returning it to the DOE as a public school is that the District 1 does not need the seats. Schools have been combined in the last ten years. An all ages vocational school would be excellent but unlikely and a worthy goal.

Singer was trash and went crazy. The building was beat up when he got it so cheap, thanks Rudy, and then he paid a gang of non union clowns to gut the interior. I hope he's sued into bankruptcy and ends up pumping gas on the NJ Turnpike. As a neighbor I've watched that building go from old PS64 to CHARAS to Singer's battlefield. Regardless of the landmarking my guess for the last 10+ years is that it will become a hole in the ground and then a shiny tower. I hope not, but I really don't see the political will for anything beyond market rate residential with the existing exterior and height. Given Adams, Rivera and Hochul the imagination isn't there to cut through the petty real estate graft.

Phew, the developer shills on here! I see many obstacles to recovering this building for community use. At this point, it may well be impossible. But the outright nastiness in some of these comments towards people hoping to do so? There are less shameful ways to make a living.

From what I understand Chino could have bought the building for very little money but never did. The Charas foundation has had 20 years to raise money to buy the building so why have they not or at least try now to raise it ? What has Chino been doing for money all these years ? Not saying he has not been working but nobody seems to mention his job ? Artists and others were renting space in Charas before the building was sold so what happened to that money ? ABC NO RIO , another Not For Profit , has raised over 10 million dollars for a new building but now says they need another million ? At least they have a big bank account but no building ? Why does the Charas foundation seem not to have money in the bank and where has any money they may have raised gone ? Why does the foundation never mention raising money but just seems to expect the City to raise it ? Lot of serious questions that nobody seems to be asking.

That's right; the reason Singer wasn't able to build a tower—or several—on this site was that pesky landmark designation.