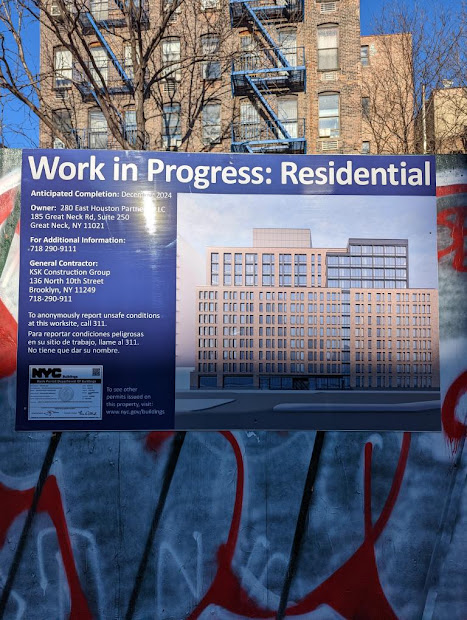 New renderings have arrived for the much-larger residential building slated for 280 E. Houston St. between Avenue A and Avenue B. (Thanks to the reader for the tip and top photo!)
The new building appears to be 11 stories with a bulkhead. The DOB permit posted with the rendering still lists a "6-story mixed-used building" ... 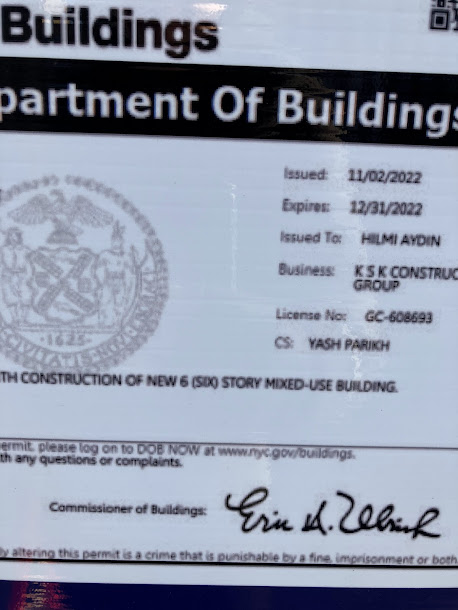 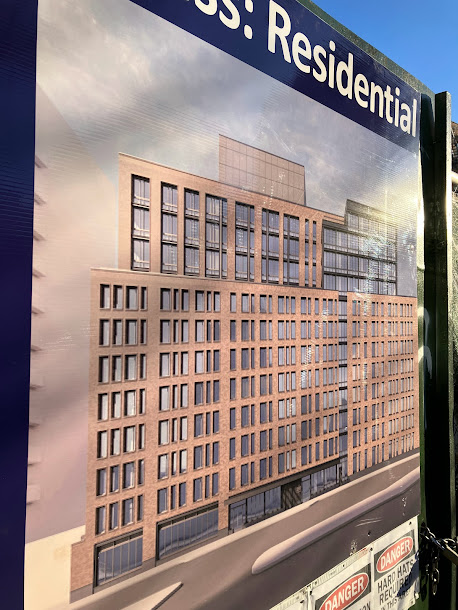 This past January, we had the scoop on this new building when the permit for a 6-floor, 68,000-square-foot residential building on this property first arrived. At the time, however, a reliable source involved with the project said the building was likely to be taller than 6 stories.
That source was correct.
In October, as The Real Deal first reported, landlord Samy Mahfar, whose descriptions in the press often include the words "notorious" or  "oft-embattled," and investors picked up the property from members of the Hirsch family for $36.8 million.
Per TRD's report, "the Hirsch family obtained demolition permits and did enough foundation work to qualify the site for the 421a property tax abatement before it expired in June."

The apartment building and retail space [the former Red Square at 250 E. Houston St.] were partially sold in 2016 to a group led by Dermot Company in a condominium structure, with the family entities retaining a percentage. When the site was later upzoned to R8-A, which permitted bonus floor area for voluntary inclusionary housing, it added roughly 65,000 square feet as-of-right to any project, which would nearly double to 127,000 square feet if it qualified for 421a.

We don't know at the moment how large the new building will be, and how many "affordable" units will be available.
The rendering lists a December 2024 completion date. In the fall of 2021, workers demolished the one-level strip of storefronts here (Dunkin'/Baskin-Robbins, Subway, China Town restaurant, etc.) adjacent to the 13-floor residential building formerly known as Red Square.
Posted by Grieve at 5:30 AM

Another blight on the neighborhood - it looks like a hulking penitentiary. Where are the REAl architects out there?!?

I get it that housing is expensive but there's only so many people you can cram into one area. Our infrastructure will just not support it.

The East Village is nowhere near infrastructure capped. Welcomed and much-needed additional housing.

I understand the backlash and disappointment this ensuing development might cause for some, yet I also think it is time to utilize this barren space, which would offer more housing to our neighborhood, perhaps it could even offer affordable housing? How is this a bad thing? Many lament on the aesthetics and the facade of newer buildings in lower Manhattan. What do people expect? If it was ultra modern, almost an architectural wonder that we often see on West Side Highway in the West Village and Chelsea, people would complain about that too in how it is sterile or ugly or gaudy or too expensive. There must be a happy medium. It seems that no matter what direction is taken in either way, there are unhappy campers. Unless someone can conjure up a better idea in lieu of this empty lot allocated for a housing unit, I'd be enlightened, and curious.

People getting upset about additional housing is dumb. We desperately need millions of units, particularly for low income, in the city to support the current population. Not even accounting for population growth. The more units we get, the better for everyone

You are spot on

The problem is that this new 11 story apartment building will not be low-income housing it will be market rate housing which means rents for about $5,000 per month for a one-bedroom apartment. The tenants will be mostly young 20 somethings working in the Tech and Financial sectors who will not stay for more than a few years and will not really be a part of the LES/EV community except for all the business they will be giving the bars in the area.

Samy Mahfar made plenty of money chasing elderly, non-English-speaking rent-stabilized tenants out of their apartments. I trust him to run affordable housing about as much as I would trust Trump.

How do people not understand that even if there is not any affordable housing (which there hopefully will be!) this is still a net positive since it is adding housing stock!?

Why is the size and height any surprise, every new residential building along the Houston corridor is rather large and tall, probably due to the width of Houston street

@2:51pm: How do YOU not understand that if all that gets built is "luxury" (un-affordable) housing, that doesn't help anyone but the wealthy & well-paid?

If you're in favor of making a perfect apartment available for every entitled trust-funder, then this project is part of giving all the bro's overpriced apartments.

@ 6:02 pm There are plenty of us that are not "bros" or trust-funders that live in these type of buildings. There are more families in these buildings than your bro friends. Maybe you should get off your high, I mean low horse and accept the things you can not change and stop projecting on this forum

I've watched countless videos on Instagram where I follow a few people whom uploaded content throughout the year regarding what it is like to locate and rent an apartment here in New York, specifically the east and west villages. These are standard apartments such as studios and one bedrooms, sometimes two, nothing terribly fancy. An open house is offered and low and behold hundreds of prospective tenants line the street where it goes around the block, sometimes two, just to see an apartment, and possibly place an offer on it with a security deposit depending on how good your credit is. Many are even offering more than the said rent by several hundred dollars (sometimes more) influencing the ultimate decision of the landlord and/or building owner or company. And those very people must hop to the next open house or book an appointment with a realtor upon finding that he or she is showing it to multiple people at once. And, they jump from apartment to apartment in many neighborhoods in the city until they can finally secure a place when they aren't at work. I have seen many of these lines forming around Ave A and 10th and it is unreal.

I cannot imagine going to great lengths to locate housing here now, especially if you garner enough wages to afford first, last, security deposit, and the kicker, 20 to 25% of annual years rent which is the brokers fee. My point? There is a housing shortage here in Manhattan. In spite of the blistering pandemic which brought many of us and loved ones to our knees, who continued to remain in our beloved EV, in spite of the hordes of others who fled for and with their lives, the uncertainty around us, hundreds of thousands returned to NY on a mission to find an apartment in 2021. Many around the globe and the country with high paying remote positions took many of those abandoned apartments, which left others in a scramble to find something expediently.

To those who moan and complain about this building, I implore many of you to read the NY Times, The Wall Street Journal, and New York magazine with published articles filled with details, research and facts about how there is now a housing desert in NYC with little to no vacancies. I think buildings such as this will mitigate some of the heavy burden on prospective tenants who have money to pour in and live in our EV/LES communities. Also, what about the burden of realtors who work their asses off going around town here and there giving a significant portion of their commission to their agency, and to Uncle Sam. That is what I refer to as a rat race.

We need to look beyond to the future and think about sustainability and large complexes such as this where it can house people and transform lives. Unless the owner of this lot chooses to make it a shopping center, which is an awful idea, housing is the only way forward. Whether we like it or not, we need to adapt as NYC is changing. More people indicates more housing. I know my lengthy response will probably garner an angry comment or two without solutions, but I don't care. That space is ugly, sketchy, abandoned, and it needs life.

Isn't it interesting how people generally understand supply / demand, but when it comes to housing, become economically illiterate, like believing restricting supply will somehow help with demand?

Yea families but wealthy families live in those places. Middle and low income families can’t afford $3000+ rent. People born and bred in the neighborhood who want to remain here and can’t afford to.

The City just published an article in October revealing there are over 60K rent-stabilized apartments sitting empty, being hoarded by landlords. Enough with this "housing desert" talk. REBNY is running this city.

Of course the trolls and "Neighbor" are digging this...over simplification from the overly simplified who complain that having any opinion that is not so "happy" about jobs/food courts etc., is being so "negative." I imagine these trolls with their pacifiers and no....wait-- that is so negative. Where is the new Smoke Shop??????

Because we know that gentrification drives less affluent long term tenants OUT. This is a gain for developers, not for those who need housing most.

I love when people like 8:07pm just post vitriol and ad hominem attacks for no reason other than because they can't stand people providing thoughtful perspective for some sad reason. I literally just complimented two people's thoughtful comments. Do I really live rent free in your head?

Sayihg that the East Village is no where near infrastructure capped is the same as saying, "Let's make this place as crowded, noisy, heavily trafficked and polluted as humanly possible and as legally possible, even if it makes everybody miserable.

How can this get permitted without a 30 foot drop back behind the building? This will steal light and fresh air for a large swath of residents north of Houston Street. Weren’t the air rights for this property already given to 250 E Houston?

People expect fresh air and sunlight. How will that be possible for those living on 2nd and 3rd street north of this building. Where is the 30 foot set back behind this building which it would likely need in order to go above 6 floors?