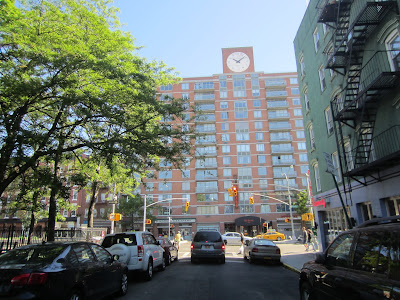 Early last summer we heard rumors that Red Square, the residential complex at 250 E. Houston St. between Avenue A and Avenue B, had been sold.

And we didn't hear much more about that...

Now Lois Weiss at the Post is reporting that the 12-floor building (with the statue of Lenin on the roof) is in contract to be sold to Dermot Co. for roughly $100 million, according to anonymous sources.

Red Square, which features 130 rental units, also has 23,000 square feet of retail space. According to the Post, the retail space was not part of the deal. There are four vacancies in this strip of shops, which include a Dunkin' Donuts, Subway (sandwich shop), Sleepy's (for the rest of your life), China Town Chinese restaurant and a FedEx Office Print & Ship Center.

According to Streeteasy, there aren't any current rentals available. A look at recent rentals show a studio going for $2,350, and a two-bedroom unit fetching $5,200.

The building, the creation of Michael Rosen, opened in June 1989.

Previously on EV Grieve:
Rumors: Red Square has been sold
Posted by Grieve at 4:17 AM

Will they get rid of the statue of Comrade Lenin? Maybe they could move it over to 78 St. Marks Place, where Lorcan said Trotsky stayed.

Stop the cycle! They'll just "upgrade" the building with cheap materials, corny marketing and totally unnecessary amenities. All of this comes with a hefty rent increase that pays off all the junk they just shoved in the building in a about a year. Flip the building in 2 years for 125 million and start the cycle all over again.

Convert it all to condos and market them to Russian and Hong Kong investors looking to park some money in the US. Sell the studios for 800K each, the 1BRs for 1.2M, and the 2BRs for 2M or so.

Ba-boom, $68M profit, give or take. Continue raking in 2-3M+ annually in "common charges" from the residents for the rest of time as well.

What's the FAR above the retail, and wondering if this was part of the deal, even if the stores themselves were not. Maybe Dermot will build on top of them.

"Convert it all to condos and market them to Russian and Hong Kong investors looking to park some money in the US." Investors would not look twice at this old and "short" building. No matter how much renovation money is dumped into this place it will never be anything than a first real job after college building going forward.

Anon 10:46 "What's the FAR above the retail, and wondering if this was part of the deal, even if the stores themselves were not. Maybe Dermot will build on top of them."

I think this is right on...I'd put money on it (if I had any). I believe there was a trade-off when the EV was rezoned a few years ago. In exchange for building limits in most of the EV, some other areas had restrictions removed. Some Chinese civic groups were very upset because they believed (correctly, I think) that their neighborhoods were going to be fenced in with too tall buildings.

$100 million. I'd guess a tear down and a deal to go even higher with setbacks for way more square footage. Current administration will make any deal any time with any developer. Maybe a ground floor two at least story retail mall.

When it first went up it blocked my old roof view of downtown. Won't miss it.

Maybe they'll attract some better retail... and not do any of the above : /

They were comrades for a very short time. Then came Stalin.

Sounds pretty inexpensive to me.
Where are the $Billion dollar sales?