Reader report: M2M to move; Wagamama on the way 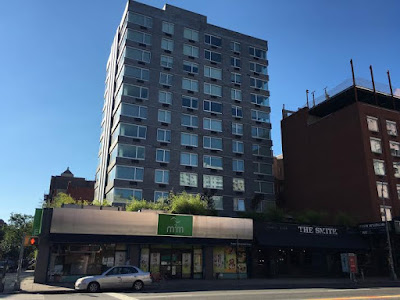 Back in June, the Commercial Observer reported that Wagamama, the London-based chain of Japanese restaurants, signed a lease for a retail space at 55 Third Ave., aka Eleventh and Third, the 12-floor building that recently went through a luxurious upgrade.

No 55, which is between 10th Street and 11th Street, is currently home to two retail tenants: M2M, the Asian grocery that opened in 2002, and The Smith. Reps for both businesses said that they were not closing, as Gothamist reported at the time. (The Observer article didn't mention which business would be departing.)

Now, an EVG reader says that an M2M worker divulged that the grocery would be moving when the lease is up. "The employee was very talkative about it. Said it was going to be within five blocks of the original store and probably going to be bigger. Still trying to figure out their likely spot because of limited spaces that size in the area."

Hmm. First, it's nice to hear that M2M will be sticking around the area. So what are some possible landing spots?

Meanwhile, Wagamama was on CB3's SLA docket for a beer-wine license this month. However, Wagamama has withdrawn from the proceedings this time around.
Posted by Grieve at 4:26 AM

I like M2M and I do hope they'll stay in the neighborhood and thrive at their new location.

Waga new about the Marriott Hotel... Good move for them. .. What about the empty store on 2nd between 10th and 9th. Big, new space.Empty for years.

Hope M2M find a good or even better location. That was a nice space for a grocery store though.