Superiority Burger, now with coming-soon signage on Avenue A 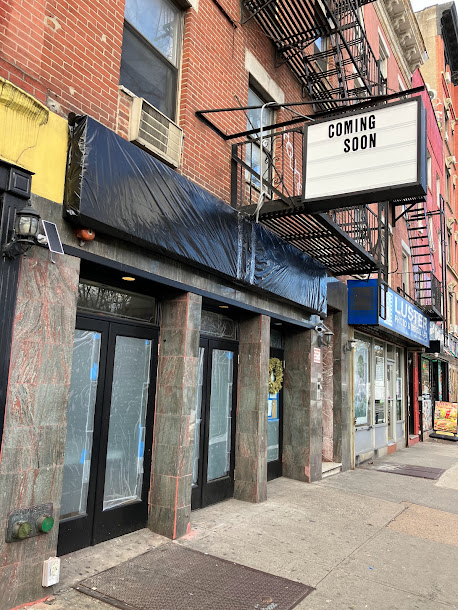 Superiority Burger appears to be closer to an opening in its new home at 119 Avenue A between Seventh Street and St. Mark's Place... "coming soon" letters are now on the marquee here outside the former Odessa Restaurant. (The under-wraps signage arrived on Dec. 2.)
As previously reported by Grub Street, owner Brooks Headley, who called the Odessa his "dream space," will start with a dinner service and then open for lunch and breakfast inside the dining room that has retained much of its diner-ish vibes.
The SB Instagram account has highlighted some new dishes and desserts in recent weeks... such as!

No word on an official opening date (please don't ask!). Per a December-time IG post: "Not open yet. But one day it will just *poof* erupt when you least expect it."
The popular all-vegetarian quick-serve spot opened in the East Village on Ninth Street in June 2015.
Odessa Restaurant opened in this space in April 1995 before a July 2020 closure. The original Odessa, the longtime favorite that dated to the mid-1960s, closed next door in August 2013.
Posted by Grieve at 5:00 AM

Can't wait! Fully expect Superiority to be mobbed when it opens.

Yay! Can't wait for the opening!

Nothing can adequately replace Odessa.

I disagree with Anon 10:37 AM, and would re-word that statement to "Nothing can replace Odessa". To go from a place with a gigantic menu for meat-eaters and vegetarians alike, with all different kinds of foods and price points, to what will be one with much more limited options that cost much more - that's a loss to the neighborhood.

if this place were any more overrated it would be a Marvel movie.

Talk about a place that the whole neighborhood can get behind. I've missed Superiority Burger a lot, but we're getting something even better in a space that will rightly remain diner-ish. win/win/win, please open soon!

I'd rather Superiority Burger than another *(*&(^&*&@#@ "exotic snacks shop." I'm a huge fan of diners, but don't make the perfect the enemy of the good.

just adding to the Hell Yeahs!!! Yay! can't wait to chow there
superiority wasn't unreasonable in price and soooooo tasty! Odessa though hadn't eaten there in decades was a comfort knowing it was there i just thank Brooks for saving this space from being another sports bar for bros and woos

Love the food… but always felt they run the place with a certain superiority complex and snobbery that leaves customers feeling inferior.

Other people's superiority complex doesn't make me feel inferior. Laugh it off and enjoy your food.

You're right, it WASN'T unreasonably priced. Emphasis on WASN'T.
But someone will have to pay for this bigger space and its renovation. And that someone will be us...

It’s not like they forced Odessa out. The owner of Odessa chose to close it and instead rent the space to Superiority, a place that a lot of people seem to have liked. And there’s no reason that meat eaters can’t enjoy a meatless meal, especially a burger that is pretty close to a meat burger. It’s not like someone is forcing you to eat your spinach.

Just…sad. From a real New York-style community spot where even…gasp!…older folks on fixed incomes could get a nice bowl of soup and hang regularly (which they did), to a trendoid, overpriced pseudo-diner gimmick.

I totally get what @5:48 says. Perhaps ‘infuriated’ for me. Yet there I was dutifully standing in their lines on their appointed days, week after week. Amazing what we New Yorkers suffer for a great meal.

I agree that nothing will replace Odessa, ever. No place for the regular people of the neighborhood anymore, putting a flower next to a grilled cheese it’s still a grilled cheese.