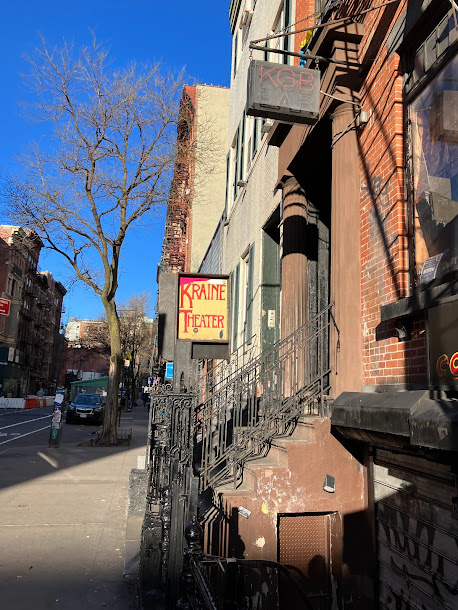 Recent headlines of possible interest include (with a photo from Fourth Street between Second Avenue and the Bowery) ...
• "So what Manhattan neighborhoods are the hottest in our new, post-pandemic normal? At the top of the list is the Upper West Side, which saw a 30% increase in residents between November 2019 and October 2022. Next up are the East Village/Gramercy and the area around City Hall, all hovering around 25% during that same span of time." (The Post)
• On Jan. 25, homeless outreach workers will fan out across the city and into the subway system to count the number of New Yorkers who call the streets and subways home (Gothamist)
• Remembering Patrick Briggs, frontman for Psychotica, who died on Dec. 27 at age 58 (Legacy.com)
• An interview with longtime East Village artist Anton van Dalen (artnet ... previously on EVG)
• Personal essay about the East Village squatters' standoff of 1995, and how Dan Kois made it the center of his new novel, "Vintage Contemporaries" (Curbed)
• Catching up with red-tailed hawks Christo and Amelia in Tompkins Square Park (Laura Goggin Photography)
• What to know about Lunar New Year 2023 (6sqft)
• Al Diaz on the evolution of NYC graffiti (huck ... previously on EVG)
• About the fried mashed potato sandwich at Rowdy Rooster on First Avenue (Tasting Table)
• A Fred Ward retrospective, including "Tremors," "The Right Stuff" and "Henry & June" (Anthology Film Archives)
• The ashes of actor Robbie Coltrane were scattered around his favorite New York haunts — including Katz's (The Daily Mail)
• Paddy Reilly's, the 36-year-old Irish saloon with live music on Second Avenue at 29th Street, is closing. The landlord won't renew their lease. (Gramercy Local)
• At Cooper Union on Jan. 25: A panel exploring issues of mental health, addiction and social justice. Hip hop/theater artist Baba Israel, sound artist Fay Victor, and NY Phil Director of Media Production Mark Travis discuss the nuanced impact that the criminalization of addiction and drug use has had on music and other creative arts. (Official site)
Posted by Grieve at 11:30 AM

This is a comment that I posted on the 13st. Squatter Eviction article which used my photo...........There are two absolutely key figures who are omitted in this article. One is the squatter attorney Stanley L Cohen who actually used the legal argument about the city allowing squatting with the position that they could take the buildings back whenever they wanted. The other is Jerry The Peddler who was arrested for protesting for housing more than all the others combined. Jerry and Cheese also organized the re-occupation of the buildings on the Fourth of July while Mayor Giuliani was speaking and got his speech interrupted by a live shot from a news helo. I always believed that this was something along with the NY Magazine article [it used my photos] on the squatters that caused him to legalize the squats in a deal with Margarita Lopez.

What a great selection of links this week - Fred Ward! Yes!

Anton Van Dalen is such a treasure. We are so fortunate to have him live among us in this neighborhood.

Mr Penley's famous tank photo was used in that Curbed article. There is no other image that shows the evil of Giuliani at that time and the stoicism and strength of our neighborhood residents. Thank you.

It's great to see that the EV is growing despite all the anti-housing sentiment.

What so great about the EV growing in population? We need less transplants and gentrifiers here, not more.

when they mention population growth in the East Village are they referring to humans or rats? Or both?