Howl! Happening explores the history of street art and graffiti with 'City of Kings' 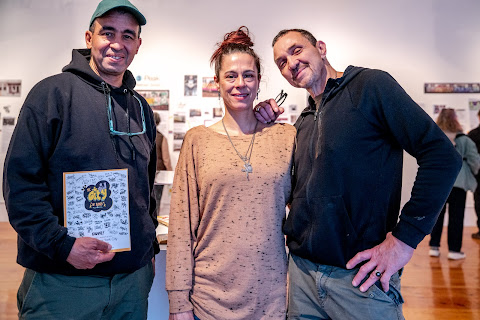 Photos and story by Daniel Efram
Howl! Happening is now showing "City of Kings: A History of New York City Graffiti," an ambitious and detailed two-part show put together by Eric Felisbret, Mariah Fox and Al Diaz (pictured above) that provides a timetable on the social, cultural and political news of the day about the rise of street art.
As one of the first-generation pioneers of graffiti as art, Diaz is uniquely qualified to bring the story together. Together with Fox and Felisbret, the trio has stitched together a triumphant tour-de-force exhibition, one that they hope other institutions around the country would like to show.
It takes work to assemble the original pioneers of graffiti in one room. And it takes a special group to bring together an essential and special show like this. 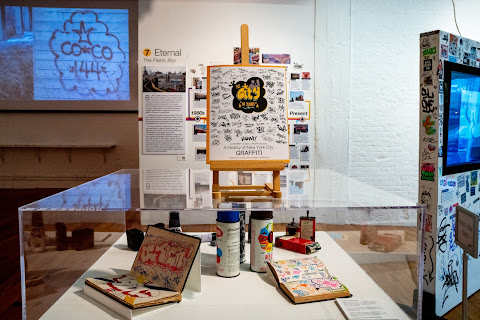 The "City of Kings" represents "the community and a collective creativity that would evolve into something huge," Diaz says.
Though Diaz has contributed to an extensive collection of books on graffiti, this one was designed to set itself apart. The team believes that the inclusion of important historical events makes it unique.
"It's important to make clear what was going on in the world at the time," Diaz says. "Current events serve as an anchor."
As graffiti is an American visual art form, it's imperative that a show and companion book like "New York City of Kings: A History of NYC Graffiti" exists. As time has passed, many first-generation graffiti pioneers have passed away. This show is helpful in describing its history respectfully, honoring as many of those who were there to make certain that this information can be passed along for generations to come.
"To have Al Diaz do this is important; it gives credibility because the writers respect him. He was there," says self-described next-generation artist Will Power. "And that [the team] brought in the actual writers, 'the pioneers,' to be involved with it while they are still here is also important. He did this from the heart because it’s important. If anyone could pull this off, it's Al."
Diaz and Felisbret are quick to credit Fox, an associate professor at New Mexico Highlands University, as the mastermind behind the "A History of New York City Graffiti" book (Howl! Arts), available in limited edition at the show.
"One of the goals of the show was to develop a graffiti curriculum," Fox says. "We want to educate people, illuminate how New York's expansive graffiti culture took root, and explain why it's so internationally influential."
"Al wanted a timeline, and he wanted to do an oral history," she continued. "Concurrently, we started working with Eric, and Eric is a really knowledgeable graffiti expert, and he came up with a core outline of important things to cover."
One of the show's essential components is the chronological timeline, expertly illuminated through the use of the NYC subway design elements, a nod to the idea that subway graffiti is its most pure form and to show historically where specific writers used to concentrate their work. But it's also an opportunity to include other milestones and terminology.
There's a lot of deeply rooted street art information in the "City of Kings" exhibition, and the visual familiarity of the subway is a brilliant way to connect the story. Following their lead, one can follow the graphics of their most used subway line and see what important graffiti history occurred along its route. 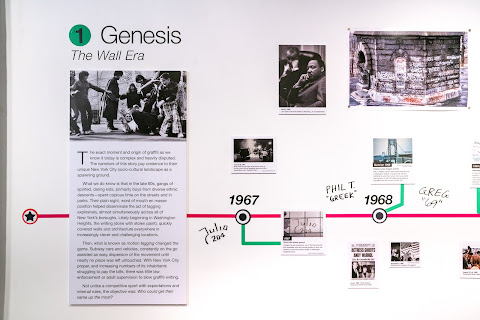 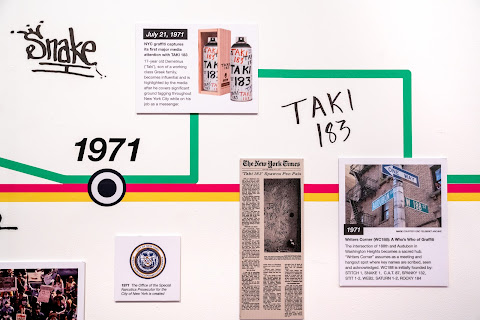 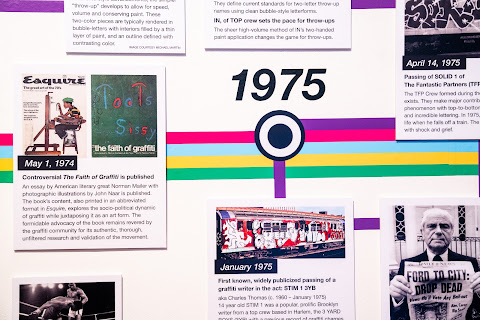 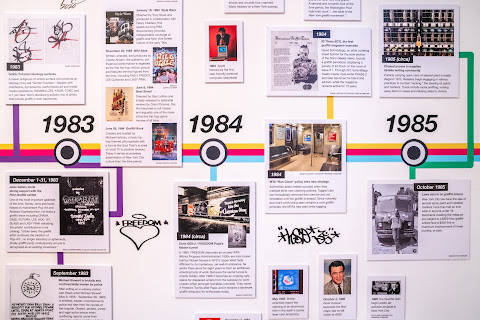 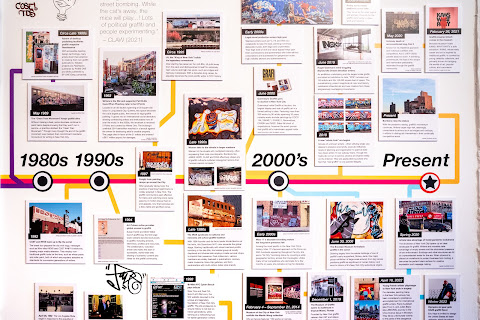 This expansive show has two distinctly unique components, one for each of the two Howl Happening locations (6 E. First St. until Jan. 15) and the second at Howl! Arts/Howl! Archive (250 Bowery until Jan. 29.
The First Street exhibit focuses on the chronological framing. At the same time, the 250 Bowery space is an art exhibition featuring canvases by graffiti artists such as Crime 79 and photographs by Henry Chalfant, Martha Cooper, David Gonzalez and others who helped document so much of the scene over the years.
"City of Kings" also includes an array of special events, including... 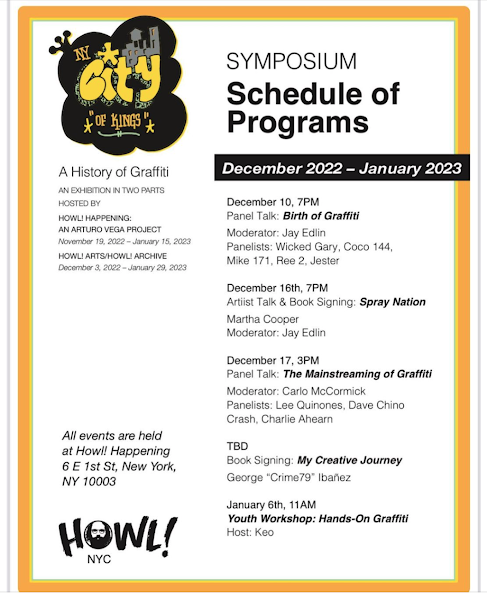 Graffiti as expressed in the '70's and '80's here in NYC was an expression of the complete breakdown of Civility and SAFETY in New York City. As it rears its often ugly head again it reinforces what I just said.-

I’ve lived here since 1983 and despise it, meaningless scribbles made by half wits, and on a subway car full of them, misery-inducing.

The negative commenters must have really hated Keith Haring whose art became legendary in some circles.

Notice how some people post comments that are critical of others whose names are in articles with only first names or anonymous. These people are cowards.

Keith Haring made delightful street art. Big difference. The last time I used my real name on a post in here, criticizing something, I got death threats, on my 'phone after being stalked, so there's that.

Graffiti is an international recognized art form that like any genre some of its great some of it blows. Keith Haring, to me, was a one trick pony though admittedly it was a good trick. His silly crawling baby has a lot of mass appeal but ultimately it's a pretty vacuous image that means absolutely nothing except people find it "cute." I'm warming up to Basquiat who had a great sense of color and composition but conceptually still seems like a lot of lightweight stream of conscience nonsense. Rarely is great art made by someone who is stoned all day long.

Graffiti in the 70s/ 80s was exclusively about personal expression. It has very little to do with the social disorder that began with white flight to suburbia in the 60's. Gentrification and the economic boom of the 80's/ 90's made graffiti artists mainstream and made them a boatload of money.

99% of the graffiti is shit. Even the 1% that is not is destroying property and costing people money. There is street art on walls that encourage and promote it which is great but those walls are no longer protected for long. It's sad and makes our neighborhood look terrible.

real graffiti is not "tagging" which is what is being referred to here. so there's that. i learned a lot from the exhibit, just sayin'.