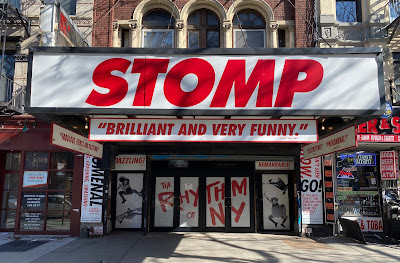 The producers of Stomp yesterday announced that the energetic percussion-based show will conclude its 29-year run in the East Village on Jan. 8, 2023.
The closing is "due to declining ticket sales," a spokesperson for the production told The Hollywood Reporter.
Stomp debuted on Feb. 27, 1994, and has performed nearly 11,500 shows at the Orpheum Theatre on Second Avenue between Seventh Street and St. Mark's Place.
Show creators Steve McNicholas and Luke Cresswell told this to The Hollywood Reporter:

"We are so proud that the East Village and the Orpheum Theatre has been Stomp's home for so many wonderful years and want to thank our producers and our amazing cast, crew and front-of-house staff, all of whom have worked so hard for so long to make the show such a success. They have always given 100 percent to every audience, from the very beginning in 1994 to the post-lockdown audiences of 2022. We want to thank everyone involved for such an incredible New York run."

Per press reports, the show has won the Olivier for best choreography, an OBIE award, a Drama Desk award for unique theater experience and a Legend of Off-Broadway award.
You can still see Stomp elsewhere as its North American and European tours will continue.
No word on what production might be next for the Orpheum, which is reportedly owned by Liberty Theatres, a subsidiary of Reading International, who also own Minetta Lane Theatre.
According to Cinema Treasures: "The site on which the Orpheum stands is alleged to have been a concert garden as early as the 1880s and, as such, to be one of the oldest continuously operating places of gathering for entertainment events in New York City."
In the 1980s, the Orpheum was well-known for Off-Broadway productions such as Little Shop of Horrors in 1982, Sandra Bernhard's Without You I'm Nothing in 1988, Eric Bogosian's Sex, Drugs, Rock & Roll in 1990, John Leguizamo's Mambo Mouth in 1991, and David Mamet's Oleanna in 1992. 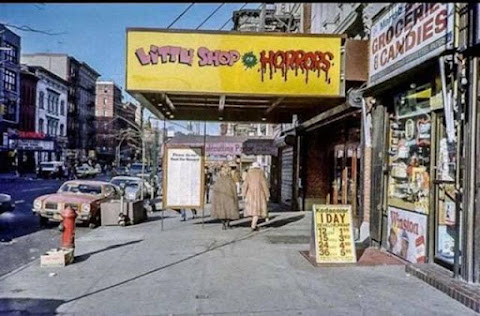 Above photo by Lucien Samaha via Cinema Treasures
Posted by Grieve at 5:10 AM

Another EV staple gone. It’s like that sad happy feeling when the kids go off to college.

So strange to have it leave. Whenever someone asks me where I live, I always say, "Next to Stomp" and they immediately understand no matter where in NYC they're from.

I saw Stomp about 25 years ago and it was a decent show. In recent years, I've felt that our neighborhood would benefit if The Orpheum had rotating schedule of events. Hopefully this will lead to a little renaissance of new theater or music at the venue.

In 1987 I worked on an HBO Bette Midler variety special featuring the creators behind this Luke Cresswell and Steve McNicholas, when they were called The Yes/No people. FULL of talent those two were. We filmed them in an ice factory in the Bronx.

Here they are, just before they came up with STOMP https://www.youtube.com/watch?v=v6IyJLQQ5j0

It had a good run! Ready for some new theater in the neighborhood. That space has a history with great shows.

Saw Bloolips there in my misspent youth, possibly more than once (memories fade).

As long as this doesn’t mean the end of the off-Broadway theater at the Orpheum, this could be good news in some ways. That’s a good run and maybe some good shows will land and grow there in the future.

Hallelujah! Finally this bore is gone.

I have lived 3 blocks away from this tourist trap since it first opened, but never felt interested in going.

Please whoever is in charge? Give us a non Madame Tussaud tourist destination. Just please make sure it is relevant and contemporary to pop culture today

Before “Stomp” took over the theatre, one could see intimate shows by the likes of John Leguizamo and Sandra Bernhard. Very unique and talented performers who made lasting contributions. Stomp denied that venue to an entire generation of creative artists and their fans.