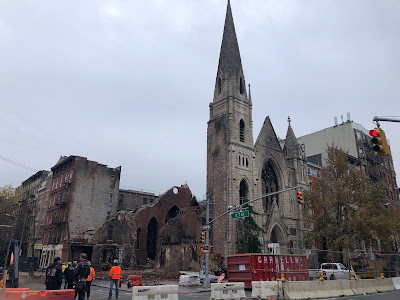 Faulty wiring at 48 E. Seventh St. was to blame for the six-alarm fire last Saturday morning that destroyed the Middle Collegiate Church, FDNY officials said yesterday.
An FDNY spokesperson told 1010 WINS that the fire has been deemed "non-suspicious."
The five-story building, which has been demolished, had been vacant since another fire this past Feb. 10. Faulty electrical wiring was also the blame for that three-alarm fire, FDNY officials said.
No. 48, which included retail tenants Via Della Pace and Cafe Mocha, was under renovation this fall.
There were approved work permits dated from Oct. 29 on file with the DOB. According to the permits: "Repairs due to fire; interior non-structural demolition, removal of damaged floor and roof framing, replace damaged floor and wall joists, reconstruct floor and roof joists, reconstruct roof joists, reconstruct roof bulkhead, repair interior stairs ... install new windows, installation of new roof."
The estimated cost of repairs, per the permit: $1.2 million. It was unclear how far along workers were with renovations. In a Facebook post this week, a longtime tenant from one of the building's four rent-controlled units said they were planning on moving back in next summer.
Meanwhile, workers have mostly cleared away the remains of No. 48. 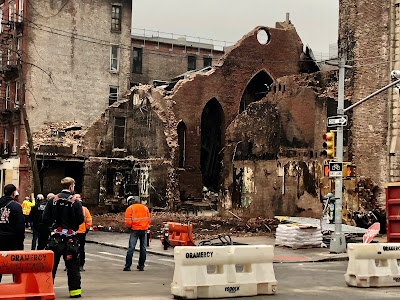 BFI sources say witnesses in the area first started smelling smoke around Midnight, Saturday. However the first 911 call wasn’t until hours later when a @nyctaxi driver saw flames rising from 48 E. 7 and pulled over to report it.

Really faulty wiring now exists in every single one of the Covid-Shanty restaurant enclosures that are everywhere, and the East Village has a high concentration of these. Almost none of them have equipment that is rated for exterior use, and when the weather starts to get really bad, we can count on someone getting hurt, and/or worse NYC DOB seems to not be enforcing anything to do with safety on these.

agreed with above, those things were supposed to be temporary seating, and now it's uncoded building structures all over the streets, I want them gone.

Yikes hadn't even thought about this but its true and many haven't even installed heating elements yet.... im pro resturaunt but I'm not thrilled these expansions are here indefinitely. Its caused parking chaos, which yes some of us actually need our cars to make a living, and it also is impeding some trash collection which the rats just love. Lets see what happens when we get snow and no one can plow or move cars

Outdoor dining is not here "indefinitely", it has an expiration date, in October 2021.

Believe it or not, there was another small fire at the church today.

How would they know it was faulty wiring? The building was totaled, the floors, ceilings and interior walls were gone, there was just a shell left. Glad they’re so certain 🙄