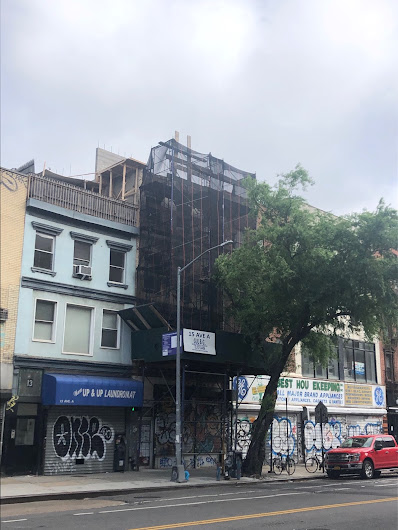 Post-PAUSE work continues at 15 Avenue A between First Street and Second Street.

As previously reported, there are approved plans on file with the city for a gut renovation and extension of the currently vacant building. No. 15 will receive two new floors, moving from four to six... with five residential units (likely condos) in the making.

You can see part of one of the new floors in the photo... 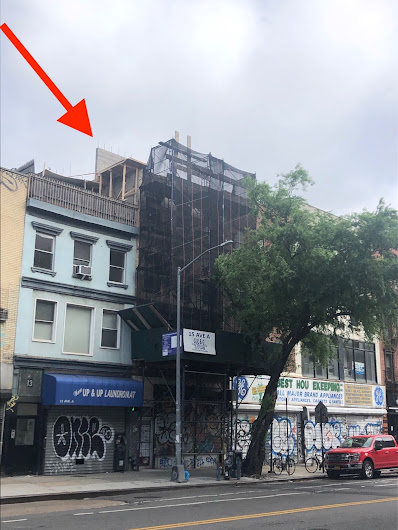 The new retail tenant is expected to be a wine bar from Bushwick-based pizzeria Roberta's.

Roberta's got its start in Bushwick in 2008. As Eater noted, Roberta's has been on an expansion kick, with openings in several food halls, and adding two locations in Los Angeles and one in Williamsburg ... not to mention its frozen pizza business.

Email ThisBlogThis!Share to TwitterShare to FacebookShare to Pinterest
Labels: 15 Avenue A

It will be interesting to see, when things begin to settle into our "new normal" - whatever and whenever that is to be - how these condos, heretofore such a hot commodity, sell. Skyrocketing crime rates, empty storefronts, people fleeing for the suburbs, all remind me of what happened to NYC in the late 60s-early 80s. Back to the future?

Yes, you have to wonder why developers are still hell bent on putting up their luxury condos in a city that's obviously on the down slope until you realize they essentially get a 10 year tax abatement for doing so.