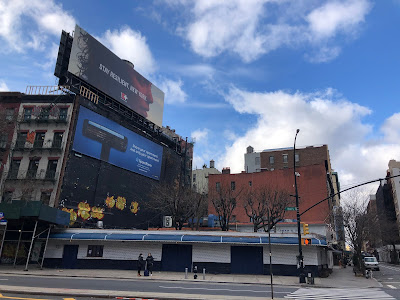 Permits were filed yesterday for a 21-floor mixed-use development — a 283-foot-tall office building — at the site of the former B Bar & Grill on the Bowery.
According to the proposed plan, the well-employed architect Morris Adjmi's building will encompass 98,799 square feet, with 26,000 square feet set aside for use as an unspecified community facility.
Permits show office amenities that include several roof terraces and a "passive recreation" area. There's also a mention of a bicycle rental or repair shop on the ground floor.
As we first reported on Dec. 8, permits were filed to demolish the one-level structure that housed the B Bar & Grill on the Bowery at Fourth Street from 1994 through the start of the COVID-19 PAUSE last March.
CB Developers paid $59.5 million for a stake in 358 Bowery, previously a gas station before its conversion into the onetime hotspot. B Bar owner Eric Goode, who owns a handful of hotels, including the Bowery Hotel across the way, has been assembling air rights to build a larger development on this corner space.
As for the B Bar, it was expected to close for good this past August. However, the bar-restaurant never reopened after the PAUSE. As we reported back on April 3, nearly 70 B Bar employees were laid off without any extension of benefits or offer of severance pay.
Previously on EV Grieve:• CB Developers pay $59.5 million for an interest in 358 Bowery — current home of the B Bar & Grill and likely a new development• B Bar & Grill lays off its staff without severance
Posted by Grieve at 5:10 AM

What a boring city... And who needs offices anymore anyway?

These new roof terraces are a blight/cancer on a community and need to be taxed at 100x. Anyone who lives near one knows what I mean. These are not balconeys for people to relax on. They are event spaces to be marketed via anonymous airbnb blockchain. Everything is being readied for the coke and white claw crowd.

Big real-estate developers have create a scam which keeps profits rolling in while quality of life, inappropriate land use are preferred to affordable housing and societal needs. It's as if there is zero urban planning, government restrictions were never created, political corruption is also on the receiving ends of these profits. One more monstrosity to secure a low-rise neighborhood's death and transformaiotn into "mid-town" south. De Blasio and his cronies are responsible for this nightmare.

Great! More useless ugliness to accompany the proposed twin supertalls over Madison Square Garden. One only need look to the "raging success" of Hudson Yards to gauge this city's "crack dependence" upon the easily frightened and quick to flee uber rich.
NYC, redefining ugly shallowness with every new billionaire.

Another great spot from my youth is gone, the city is losing all its charm one bldg at a time.

Bring back the gas station and make it a Wawa.

The air rights concept needs to be taken out of the books, it's ridiculous. No one owns the air above their building, and they should not be able to make a profit from it by selling it to a developer who may not even be in the immediate vicinity, collecting those "rights" like they were Pokemon cards.

And the Mayor wants to Upzone the area even more! Will Gigi Li/Margaret Chin and Carlina stop this real estate grab under the guise of "affordable" housing?

21 stories? Thought they couldn't build that high anymore in the area?

This is a city. what do you expect?

I believe cooper union was leasing the lot to b-bar

Interesting, they were saying that millions people left New York City permanently mostly high wage earners since Covid hit and that many office workers might not ever return to their office building and will work from home indefinitely. Even with all that the building boom continues. I think they are counting on the population growth that's coming or maybe they just printed too much money and want it invested into real-estate.

Oh no another glass and steel 21 story monstrosity of a building especially on the Bowery where it will block out the sunlight and be so out of place in the neighborhood. This type of building is not wanted or needed especially with a glut of commercial office space available in the City because of the Covid pandemic. Terrible decision.


Boo to this idea

Seconding the roof deck comment from 9:09 AM though no tax is going to ensure quiet use and no impact on anyone sometime within a block (or two) of these atrocities.

Our neighborhood area does not need a another office building period, now as others have said a gas/charging station would be a big help

I believe cooper union was leasing the lot to b-bar

If you remember that, you may remember that when B-Bar first opened, a second-floor tenant in the building next door [Carl Hultberg] made a sign pointing to B-Bar that said, "O Cooper Union! How Can You Do This To Our Neighborhood?"