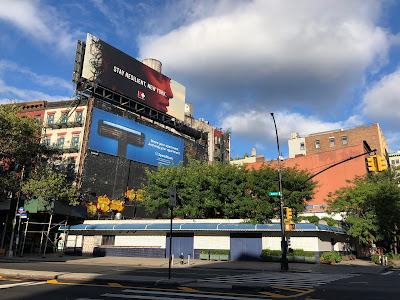 Permits are now on file with the city to demolish the one-level structure that has housed the B Bar & Grill on the Bowery at Fourth Street since 1994.
As reported last fall, CB Developers paid $59.5 million for a stake in 358 Bowery, previously a gas station before its conversion into the onetime hotspot. B Bar owner Eric Goode, who owns a handful of hotels including the Bowery Hotel, has been assembling air rights to build a larger development on this corner space.
B Bar was expected to close for good in August. However, the bar-restaurant never reopened after the PAUSE in March. As we reported back on April 3, nearly 70 B Bar employees were laid off without any extension of benefits or offer of severance pay.
No word on what new development will rise here. Likely not a hotel given that Goode has one right across the Bowery.Previously on EV Grieve:• CB Developers pay $59.5 million for an interest in 358 Bowery — current home of the B Bar & Grill and likely a new development• B Bar & Grill lays off its staff without severance
Posted by Grieve at 5:20 AM

Email ThisBlogThis!Share to TwitterShare to FacebookShare to Pinterest
Labels: B Bar & Grill, closings 2020, restaurant closings, the B Bar

Any idea how many floors of air rights they have?

back in the early aughts on Tuesday nights at B Bar there was the legendary party called Beige... sorry to see B Bar close although haven’t stepped foot in there in years

We need to pass zoning with reasonable height limits that the developer cannot go over for any reason. No exception for affordable housing. Nothing. Just a strict height limit.

1 story building on a plot that large Suprised it stood there that long.

Beige was legendary indeed, but in the late 90's already. It ran by NYC and Paris nightlife icon Edwige Belmore, who sadly passed in 2015.
On those Tuesday nights of '98 and '99, I sat at tables with the gods, Bowie and Prince. It was before roped VIP sections, before bottle service, before Bowery turned to be, well, whatever it is today.

Say good-bye to those clouds in that picture.
Next up; Phebe's

Isn't that (essentially) across from the Merchant's House Museum?

Just imagine what the vibrations from demolition of B-Bar & then excavation for a MUCH MUCH larger building, will do to the Museum's building.

I wonder if any of our elected officials has given this a shred of thought.

Demo isn't going to cause any significant (bad) vibrations. It just a one story lightweight structure on top of a concrete slab.

Anyone recall that the guys who started the Fourth Street Food Co-op went up against Goode and tried to get the space, a former gas station, for a recycling station? Cooper Union owned it then and went with Goode. Goode and company set up table for passerby to sign petitions supporting them. Told everyone how they would do so much for the neighborhood. Tell me one thing they did for the community. Ha! So obviously Cooper Union no longer owns it? When did that happen? And Beige? Meh.

Yes, that was Carl Hultberg, who ran the Village Green Recycling Team and later the recycling program at NYU, if I remember correctly. He lived next door to BB and used his front windows to lambaste the joint.Cantankerous in the best of ways.

@3:20pm: Read the rest of my comment! How about the damage that can be caused by excavating for the foundations of a MUCH, MUCH larger building??

Just what the EV needs, another ridiculous hotel, as if the others were doing that well. The EV has become a strip mall for tourist trash.

This is really short notice, but there is a CB2 hearing tonight at 6:30 that addresses the development that is going on next-door to the Merchant House on 4th St, across the street from B Bar. Developers want to build yet another hotel on that lot and the construction endangers the Merchants House. You can attend the hearing (virtual) or leave a comment on the registration page:

How many hotels do we need in this area? While we're distracted by a pandemic and unemployment, developers are moving ahead to grab what they can.

What they will build will most certainly threaten the Merchant House. There was a problem with nearby construction a number of years ago. Don’t recall the resolution, but do remember signing a petition to stop it.

I don't like what the city is evolving into. Hopefully the community space will be interesting or supportive or something.