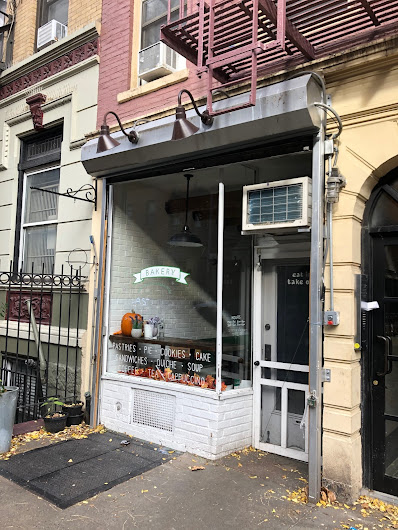 From the EVG tipline: Westville Bakery closed as of Sunday on Ninth Street between Avenue A and First Avenue. While there isn't any official notice of a closure, temporary or permanent, the shop was not open yesterday during usual business hours ... the space also looked as if someone emptied it out.
No one from Westville responded to an email or Instagram message about the closing.
Meanwhile, the tipster tells us that Superiority Burger will be taking over this space.
And the folks at Superiority confirmed the upcoming expansion, noting that they will also be keeping their current (and original and small) home across Ninth Street.
Superiority also confirmed that the new space will not be used for indoor seating, and they are still shaping up their future plans for the Ninth Street spaces... 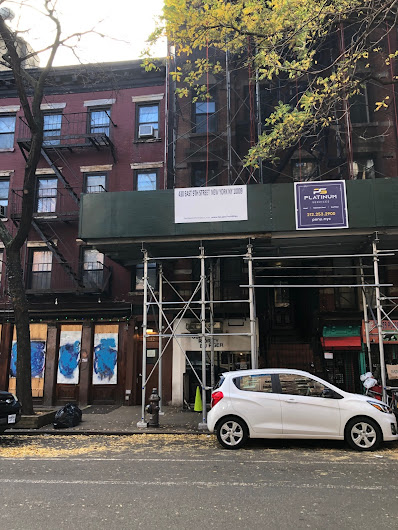 Westville Bakery, which offered a variety of sweets and cafe fare, debuted here in October 2018. It appeared to have a solid following — even after Sullivan Street Bakery moved in a few storefronts away in October.
Superiority opened in the East Village in June 2015... and has pretty much been a veggie juggernaut since it unleashed its first batch of quickly vintage Yuba-verde sandwiches and, say, hakurei turnip slaw.
Posted by Grieve at 5:12 AM

WESTVILLE ..Overrated and Over-charging..Dont get the allure of this place.

This particular Westville was inferior, quality-wise, compared to the West Village location. Nothing tasted as fresh or delicious. Who knows why.

I think you might be confusing the bakery for the restaurant.

Though I'm the furthest person from a vegetarian you'll ever meet, I love Superiority Burger. Everything I've tasted off the menu is great! Hopefully they can expand their menu with the new space and people won't need to cram in as much waiting for their food -- the other spot is pretty tight! Good luck to them!

I never went to this Westville bakery—and, I'm sorry to say, missed the brief Sullivan Street bakery stint here—but I must say I'm stoked that Brooks found a space to expand Superiority Burger!

In this neighborhood, you just can't have too many vegetarian burger places; witness the failure of Lovenburg on 6th street—which, to my knowledge, was not vegetarian at all.

Sigh, as a resident of ninth street, I'm not looking forward to the people blocking ones ability to walk on the sidewalk. That is a common problem across the street. Adjacent to the anticipated new location there is a very narrow inclined sidewalk due to large tree roots which already creates a blockage for people flow . With people waiting about, this will be a real problem. Instead of now having 3 locations on the street ( there is the ancillary kitchen in the Icon building close to the corner) the owner should consolidate into one large space that serves more efficiently. With so many empty larger storefronts, this makes no sense and will be a constant source of irritation to us ninth street residents

I didn'tcare about the Bakery I was solely talking about this Restaurant Chain which btw I believe prepares food offsite before delivering to the Restaurants.

My 10:57 reply was for 10:26, not for your comment.
But I don't think you can call Westville a chain, just because they have a couple of locations. And I seriously doubt they don't prepare their food on premises.

Pretty sad- that bakery was a place to sit and have coffee and talk to genuine the people who worked there- sort of like Zuker which it replaced.

Do people here not like Superiority Burger? I'm not even vegan but the veg options are great. The pints of ice cream/sorbet they also sell are incredible...

No way! I would never go to the restaurant (you shouldn’t too) but this bakery was a gem! Going to miss their rhubarb tart and muffins! It made my wfh so my much sweater. Please reopen back! Also kudos to the friendly staff.

Sorry, that it’s gone. Staff was friendly and I liked the pastries.

"please reopen back" lol it JUST closed!!!!!! the restaurant is bomb, no idea why so many h8ers for Westville

Westville bakery was definitely solid and chill - some really tasty and affordable comfort sweets even if the chain itself is arguably beyond basic I’ve got nothing but love for the bakery and their vegan carrot cake and scones in particular!

I hope the hipsters will not line up in front of Dian Kitchen, one of my favorite Chinese noodle spots.

I personally had a fantastic experience at Westville Bakery. I had blueberry pies and two custom bday cakes and all were fantastic.. not good... fantastic and I consider myself to be a foodie, especially for cakes. I also loved the staff.. Young hardworking people that always had a smile on their face. Im sad for them and for me
:(