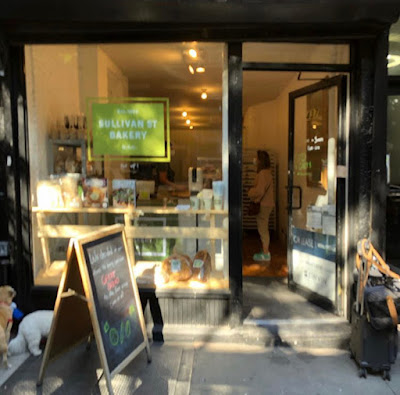 Sullivan. St. Bakery has opened an East Village outpost at 437 E. Ninth St. between Avenue A and First Avenue... Pizza blogger and EV resident Arthur Bovino happily made this discovery over the weekend after the bakery debuted on Friday... he posted about this on his Instagram account —@nycbestpizza ... 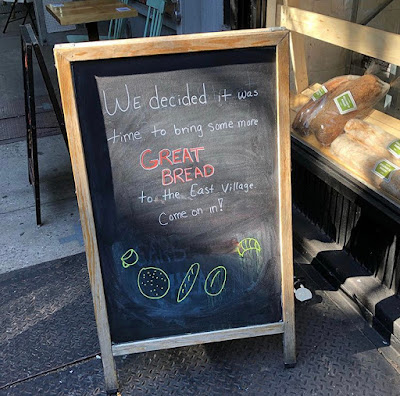 They have a variety of bread available ... as well as three styles of focaccia. They also have chocolate chip cookies, disco romano, croissants, fruit tarts and a rotating selection of sandwiches. They are working on sending their Roman-style pizzas here as well. (H/T to Vinny & O for updated menu info.)
Jim Lahey opened Sullivan St. Bakery in Soho in 1994 ... and moved to a new headquarters on West 47th Street in October 2000.
For now, the location is considered a pop-up, but it may become permanent. (They reportedly have an "indefinite" lease.)  Instagram lists their hours as Tuesday through Sunday noon to 7 p.m. ... while the bakery's website lists Wednesday through Sunday noon to 7 p.m.
The address was previously the home to Pizza Rollio, which closed in July 2019.
Posted by Grieve at 5:30 AM

And right across the street at 438 E 9th Street, a new one man coffee bar called Murphy"s Door Cafe opened at the same time. Let's support both!

Haven't had a chance to stop by Murphy's Door Cafe ... From the owner of Sneak Ez...

Staff at Sullivan was super helpful and bread was great. Looking forward to going back.

Sneak has not been a good neighbor since opening. Parties, fights, and loud music. He only wants the "cafe" so he can get a liquor license for his clubhouse. Hard pass on Kyle.

Cool, good bread! More rare in the EV than quiet nights! (And yes I know about C & B, I bought bread there weekly as soon as Ali started selling it, but the taste and texture changed once he got his new oven, and I don't like the results at all, so I stopped buying.)

More delicious bread in the EV, I also love Ali’s sourdough and baguettes at C&B Cafe over on 7th

I have gained 25+ pounds since COVID. I officially have a dad bod now. Thankfully, I have expandable waists on many pants and jeans. Baked goods and sweets have been some of the few things to lean on in dealing with social distancing from friends/family, the uncertainty of the virus, and the orange lunatic in office. It's just too much to process. I've decided this year doesn't matter when it pertains to diets and/or resolutions. 2020 is a write off. I am also more than happy to support local merchants in our community. I will be paying a visit very soon to buy some goodies here for my husband and I.

This is simply great news. Their bread is good -- man it would be awesome if we got some of their pizzas in the store too!

Thanks for sharing Grieve!

good bread always welcome! something for the actual residents as opposed to the shriek-y maskless party babies. i love C&B for sure, the newly reopened Le Fournil is great, and I'm excited to try Sullivan Street's offerings!

Can't wait for them to bring the pizza in!

Yes! More bread! I used to work near their Sullivan St. location and often bought bread there but hardly ever made it to the 47th St. location once they moved. I love Ali's bread at C&B and buy it weekly but am also excited for new bakery options to mix things up.

Beautiful bread at Le Fournil on 2nd Avenue too and their croissants are epic.

I love Jim Lahey and make his no-knead bread regularly. So glad this place has opened and I hope they stay. Sampled a focaccia last Friday and yesterday a baguette. Their chocolate chip cookies are chocolate mountains of goodness. They also sell Jim Lahey’s bread books and sandwiches which look gorgeous. I’ll still go to Russo’s for my semolina bread though.

437 is a benchmark building, good luck. These developers just like icon and croman.

I just stumbled into Le Fournil today! It is like a trip to Paris! Near the SW corner of 2nd Avenue and 7th Street.

Never heard of Moishe's, I gather.

Well, it's a monthly basis lease, so no that much to worry about. The best way to go nowadays.

Sullivan St. bakery in Soho became Grandaisy, which is also very good, and as far as I know very similar. No kneaders should watch Jacques Pepin's homemade bread video on youtube. His method could not be simpler and the results are surprisingly good. You can experiment with different types of flour--bread flour, all purpose, whole wheat--to get the results you like,

Le Fournil is great! They’ve sustained the neighborhood throughout the pandemic, struggling as a new, unknown business and with their window boarded up from the night of vandalism. Their breads and savories are very good and their French sweet selections a great addition to the neighborhood. AND they also have items coming straight from Moishe.
That said, I love having an Italian alternative in the neighborhood. Welcome to both.

Ronnie, marjorie, and Anon 2:46pm - thank you for recommending C&B - I had never been in there before but saw your comments so I went there today for a fresh whole wheat loaf. Wow it is outstanding! Whole family loving it. I'm looking forward to hitting Sullivan Street and the other options mentioned here, and will absolutely be going back to C&B. Thanks again.