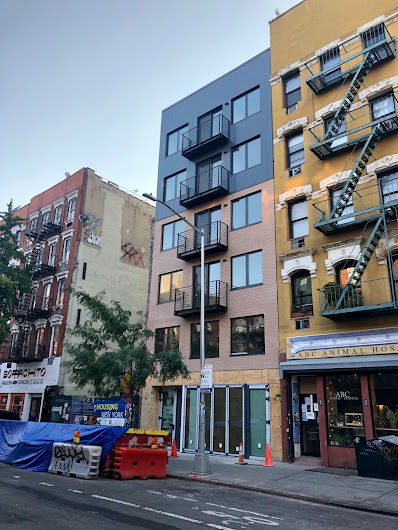 Just noting that workers recently removed the sidewalk bridge from in front of 202 Avenue A between 12th Street and 13th Street ... providing a full reveal of the gut-renovated building called the Topanga. 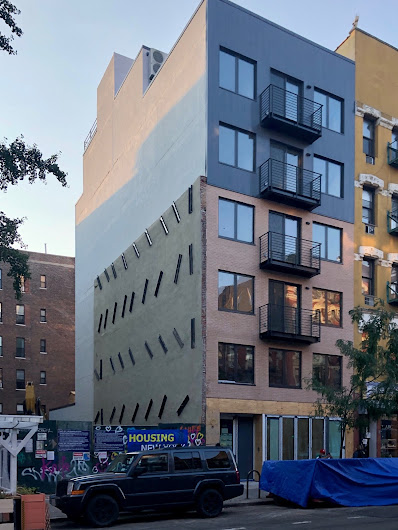 As previously reported, workers added a horizontal and vertical enlargement of the existing 4-floor structure, doubling the total square footage from 5,334 to 10,920. There are 10 residences here, including a duplex penthouse with a private terrace. No word on pricing.
Highpoint Property Group bought No. 202 in a deal that closed in late 2017 for $6.75 million, according to public records.
And next door, No. 204 will rise to seven stories, yielding 10 co-operative units for fixed-income housing.
Previously on EV Grieve:• Affordable housing planned for city-owned buildings at 204 Avenue A and 535 E. 12th St.• 202 Avenue A has been gutted on its way to doubling in size to become the Topanga
Posted by Grieve at 4:59 AM

Email ThisBlogThis!Share to TwitterShare to FacebookShare to Pinterest
Labels: 202 Avenue A

This is another High Point renovation that's added 4 outdoor balconies and a roof deck to a building that never had them. They did the same thing with their market rate buildings around the corner at 442 E 13th and 336 E 13th which opened this summer. 442 has been a nightmare with roof parties that start at 11pm and go to 3 or 4 in the morning with DJs, club level music with no social distancing and no masks. People are also out on the balconies midnight and later yelling, drinking, talking. These guys are terrible landlords. And in addition at 202 Ave A they want a bar/restaurant with full liquor, 30 foot bar, accordion doors and indoor/outdoor seating for 74 at an address that never had a license. High Point is trying to hard to rival Icon as the worst owner/developers in the East Village.

The architect (if there actually was on on this project) had two ugly designs for this building and decided to incorporate both.

I live behind this building and watched the renovation happen. The quality is second to none and the men and women who built it were exceptionally respectful and accommodating to us neighbors. I think it is a beautiful addition to our neighborhood, especially in this incredibly challenging time. I also think anyone leaving such hateful and unnecessary comments on here is just plain silly. You cannot hate new buildings just because they are new.

They really need to put up surveillance cameras so it doesn’t Wind up vandalized like the rest of the neighborhood. I think the building looks good other wise