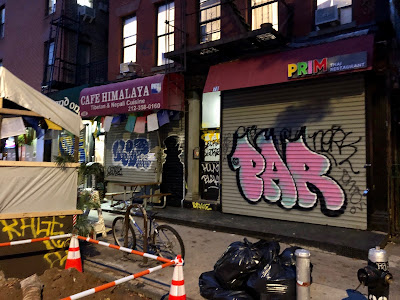 Running a restaurant during the pandemic is obviously challenging enough... Cafe Himalaya has had its share of challenges in recent months, including having someone break into the 18-year-old Tibetan/Nepalese restaurant on First Street here between Avenue A and First Avenue and steal the cash drawer.
On Tuesday, owner Karma Dolma discovered that Con Ed will be doing emergency work on the building — forcing Cafe Himalaya and neighbor Prim Thai to close in the interim.
Con Ed said that they will need at least a week, which in Con Ed time, means a lot longer. Probably. (And yes — this sucks for the residents too.)
We'll update when the two places will be able to reopen.
Previously on EV Grieve:
• Checking in on Cafe Himalaya
Posted by Grieve at 4:59 AM

Con Ed is the utility that time forgot. They seem to work in another dimension.

Are they still closed? This was two months ago? I really hope they're ok, and can reopen. Any updates EV?

They reopened briefly in early November... only to close again. I'd say they've been closed for the past 7 weeks now. I reached out to them to learn more, but they didn't respond...