More about the layoffs at B Bar & Grill 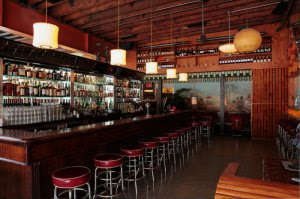 As we reported back on April 3, nearly 70 employees of the B Bar & Grill on the Bowery at Fourth Street were laid off in late March without any extension of benefits or offer of severance pay.

One of the now-unemployed B Bar staffers shared the letter sent to employees and signed by owner Eric Goode ... 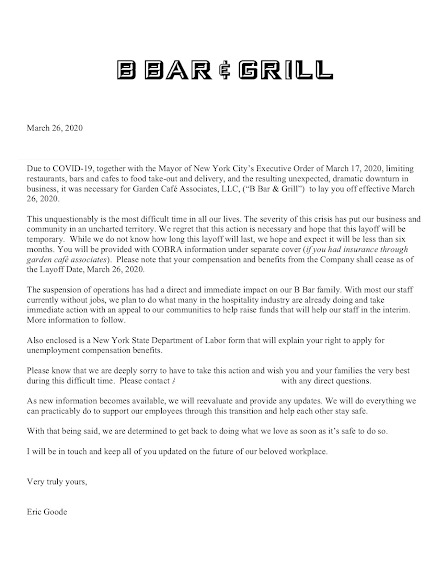 As one former employee said:

Eric Goode responded to employee pleas for two weeks paid leave with very little - some directions about how to apply for unemployment and a "yours truly" sign off. This termination without pay was sudden and decisive, leaving many of the staff left with nothing to feed their families. Many of these staff members have worked at 20-plus years. Mr. Goode is currently living on his multimillion-dollar ranch in California.

Goode has enjoyed positive press in recent weeks for his role as the co-director and co-writer (along with Rebecca Chaiklin) of "Tiger King," the hit docuseries that recently debuted on Netflix.

BuzzFeed News talked with several former employees in a piece published earlier in the week titled "Their Wealthy Boss Was The Director Of 'Tiger King.' They Got Laid Off And Can’t Pay Their Bills."

[F]our staff members at the restaurant told BuzzFeed News that unlike other wealthy hospitality leaders who have donated salaries and worked to fundraise for those suddenly out of work, they have heard nothing from Goode as he enjoys Hollywood attention. Goode, they say, has the wealth and cultural influence to help them at a time when they need it most.

“They have families, they have children, they have mortgages to pay, and they spent a lot of their life working for B Bar,” said Luis Lugo, a former floor manager. “You’re the director of Tiger King and you own the Jane Hotel and you’re not a small mom-and-pop shop that’s struggling. You’re someone that has the financial resources to make a difference.”

“It strikes me as unjust that I worked a long time for him and didn’t get anything in return,” said Eloy Aguilar, who worked for 25 years at B Bar as a line cook. “We need economic help, not just for me but also my other colleagues.”

There is a staff-driven GoFundMe campaign here.

As reported last fall, CB Developers paid $59.5 million for a stake in 358 Bowery — the B Bar & Grill's home since 1994. Goode, who owns a handful of hotels including the Bowery Hotel, has been assembling air rights to build a larger project on this corner space. B Bar was expected to close for good in August, per the former employee.

Previously on EV Grieve:
CB Developers pay $59.5 million for an interest in 358 Bowery — current home of the B Bar & Grill and likely a new development

B Bar & Grill lays off its staff without severance
Posted by Grieve at 2:00 PM

Email ThisBlogThis!Share to TwitterShare to FacebookShare to Pinterest
Labels: B Bar, B Bar & Grill

I spent almost fifteen years in the restaurant world of NYC, mainly as a waiter, with a few stints as manager and bartender at numerous places all over Manhattan. What is most evident in this industry is how so many are not appreciated nor valued by management and ownership, even during a crisis such as this. There are a few exceptions with some employers being exemplary in how I and others were treated, but I could count them on one hand. The rest were awful and greedy. Many employees I worked with and managed were there since day one when the business opened their doors. A lot were immigrants and off the books. They worked doubles, on holidays and on their kids birthdays, even when they were ill. They came to work in blizzards and heatwaves when the AC was broken. They never complained and worked twelve hour shifts aka doubles. And they were often overlooked. And other legal employees gave such incredible devotion too. Only a few were given favoritism. What I am getting at is a majority of restaurants don't have the resources for emergencies or the time of day for their staff. It is one of reasons I left aside from no job security and emotional/mental abuse. Its a rough industry. A real boss would have at least done something kind for their staff whether it would be ample notice, a week or two weeks pay, even a couple of hundred bucks for all. Anything. My heart goes out to all whom were affected by this closure. I hope they can access some level of resources from somewhere.