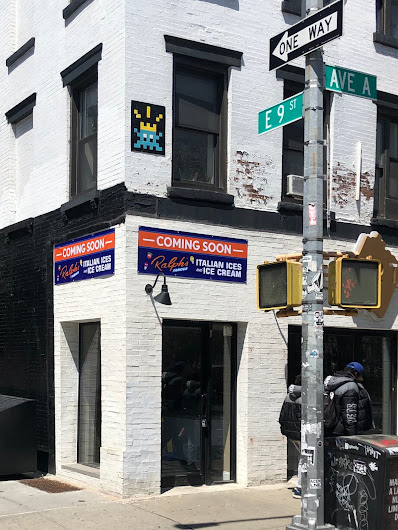 The coming soon signage for Ralph's Famous Italian Ices & Ice Cream has arrived at 145 Avenue A and Ninth Street... 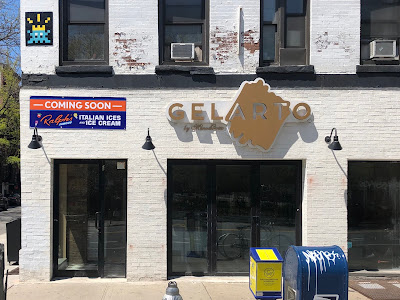 As we noted on March 3, the expanding company has several new outposts planned this year, including in the East Village.

This business dates to 1928 when Ralph Silvestro started selling Italian ice (or water ice) from his truck around Staten Island. The first retail store opened in 1949 on Port Richmond Avenue in Staten Island. In recent years the company has franchised out, expanding to other parts of NYC as well as Long Island, New Jersey and Westchester County.

Ralph's takes over for Gelarto, which closed early last summer after a rocky two years selling gelato on the corner.
Posted by Grieve at 5:20 AM

Wish it just stayed as Cafe Pick Me Up

seems like a tough time. considering no one will be outside this summer.

This is some legit cream ice people. Welcome to the neighborhood Ralphs

Yes! Thanks for reminding me about cafe pick me up. 20 years ago I would come to study there from Brooklyn and eventually ended up living 4 blocks from it since. Such fond memories. No memories of gelarto tho...

If they put the window on the street they will have people lining up - we can have very successful businesses here in the short term if the real estate is priced appropriately - the heroin years are over transnationalist REITs!

I wonder if Ralph is aware of the problems Gelarto had with their new landlord Icon Realty? Icon's reputation precedes them. I don't patronize any business in any Icon building.

This a great news. Been a fan since my days in Park Slope. Ralph will make it in that space. Ralph's I tip my hat to you. To have the guts to make a move in time's like these takes courage. TSB started lease negotiations in '09 during the height of the recession. These are the rare moments where commercial tenants have the upper hand over LL's. It won't last. Best of luck to you guys.

I don't know... that corner seems like a poisoned chalice and too big a space for just Ice Cream. Especially right now.

I went so often to Café Pick Me Up back in the day, that my friends and I just called it 'the office".
As in "let's meet at the office". Such fond memories...

Ralph's is a welcome addition to the neighborhood. Gelarto was great in the beginning but they stopped caring and I never felt comfortable with them making ice cream in that basement. Maybe storing stuff in freezers down there is okay, but that's it!

@Bagelguy..reach in freezers and soft serve machines have been sitting inside the storefront for more than four or five months now, long before the pandemic. I'm sure the lease has been signed for a while, so they might have any potentially favorable deal.

You kidding? Have you seen the neighborhood last Saturday afternoon with 62 degrees on?

They signed the lease long before "times like this".

It's the landlord, not the corner.

A) Everyone will be outside this summer, hopefully still wearing masks and keeping their distance.
B) The two Ralphs I have frequented use pass through windows, which should cut down on the issue of indoor crowding.
C) The landlord had better not screw this up because Ralphs knows how to generate tons of loyal customers, Plus they aren’t exactly a lot of good retailers looking to sign leases right now.

Since the sign is up, they will maybe open in about six weeks after the required LLC publication law. Which is another tax on small business and stupid ny barrier to entry.[0]