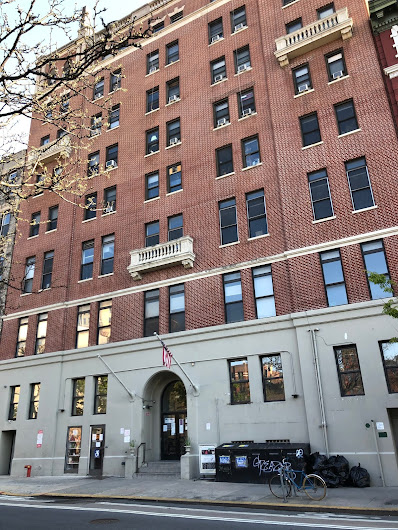 The Washington Post published an investigative piece this past weekend examining the deplorable conditions at the single room occupancy (SRO) residence at 331 E. 12th St. between First Avenue and Second Avenue.

The facility, above the Educational Alliance's Sirovich Center, which is currently closed, provides housing for formerly homeless single adults and veterans age 55 and up run by Volunteers of America of Greater New York, an affiliate of the national housing-focused nonprofit based in Alexandria, Va., and subsidized by government agencies.

According both to tenants and images viewed by The Post, sanitary conditions are poor, social-distancing has been lax and food is scarce. Residents described their situation as a ticking coronavirus time bomb, with even basic protective tools absent; never mind gloves and masks, there has not even been soap or toilet paper in the shared bathrooms.

On Saturday, their fears seemed to have been realized. A man, believed to be in his early 60′s, was found dead in his room by another tenant, according to a resident who was present on the site. An empty ambulance could be seen idling outside the building Saturday afternoon; by evening, it had been replaced by a city-morgue van. No cause of death was immediately available, but the man had been complaining of trouble breathing in recent days, said one tenant. He added that the man had not received any medical attention, and was seen as recently as Thursday mingling with other residents in the facility’s common area.

The Post notes that VOA-GNY runs it under a contract with the city’s Department of Homeless Services, and that the 92 rooms are "filled with former lawyers and veterans, stockbrokers and city workers, each with their own story of how they fell on hard times to end up here."

Though just one of what advocates say is a litany of problem spots in the New York area, the 12th Street SRO illustrates how coronavirus is endangering a whole class of people. The scene lacks the dramatic optics of a hospital lobby filled with patients on ventilators. But a closer look at its images — an elderly woman without food, a cancer patient deprived of basic cleaning necessities — tells both of the forsaken vulnerable in a besieged city and the people who have left them behind.

Joshua Goodman, a spokesperson for Kathryn Garcia, New York City's emergency food czar during the COVID-19 crisis, told the Post that the 12th Street SRO would now be moved to a new food-delivery program that will see residents receiving a four-meal box every other day.

A four-meal box did arrive for the residents on Friday afternoon.
Posted by Grieve at 5:50 AM

It is unimaginable that there could be a lack of food considering the building is literally directly across the street from a three meal a day nyc pickup center at Asher Levy school. Maybe this article was researched before the pick up center was activated? I hope that was the case!

How can we help? Is it possible to drop off supplies outside of this building, or is that putting people at risk of infection? Any ideas?

Why is this damning article buried in the Business section?

@10:17am: What's unimaginable is that the Sirovich Center has a full kitchen that normally serves 3 meals a day, M-F (when the center is open), in a dining room on the 2nd floor to members of the Sirovich Senior Center.

According to an elderly friend of mine who goes there, Sirovich HAD been handing out to-go meals on the front steps mid-day to those seniors who would otherwise have eaten IN the Sirovich dining room, but that was a few weeks back & I think they've now stopped doing that. The to-go meal recipients also got the box of shelf-stable foods - my friend said they delivered the box to the door of her walk-up apartment.

I lived there for four years and the conditions are far worse than anyone can imagine.
At the moment, i am being forbidden to enter the building to check on my significany other while i am wearing a mask and the Super yells at me along with the security /reception to get out of the building. However, none of them are wearing masks or gloves.
The "suoer" and his wife have an entire floor to themselves to live on (rent free!!!)
The new program director has a resume clearly showing that the geriatric population is her specialty because tbey are seemingly easy to push around and scam. Her favorite topic is "rent" as it immediately grabs a resident's attention (fear induction). The saddest part is that she finds the worst places to bring uo the subject - public elevator, patio, lobby.
Bottom line: most unprofessional dangerous group of individuals grossly mishandling the lives of our aging loved ones. (To be continued. ..)

Call the Department of Health.
Inform OSHA of the fact that this building is in violation of codes that have yet to be invented!

It is not true that the super and his wife 'have an entire floor to themselves.' The super and his wife lives in a tiny apartment on the 3rd floor. Which is occupied by the VOA's workers. Some of whom are case managers to the folks who reside in the SROs.
I lived at the 12th street SRO. while the building is old, it is kept reasonably clean. It could be better. But it is not filthy. This post tells me that someone is angry and is exaggerating his/her experience at the 12th street SRO.