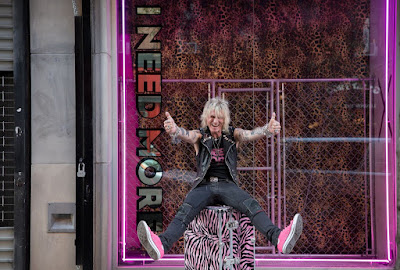 [Photo for EVG by Walter Wlodarczyk]

Word is circulating that Jimmy Webb, a familiar figure in the East Village during his long tenure as the manager and buyer at Trash & Vaudeville, has died of cancer. He was in his early 60s, friends say. (An official statement about his death has not yet been issued.)

Webb, once referred to as "punk rock's unofficial shopkeeper," counted everyone from Iggy Pop and Debbie Harry to Slash and Duff McKagan from Guns N' Roses as friends. Most recently, he owned and operated the rock 'n' roll boutique I Need More on Orchard Street.

Here's more on Webb's past via a New York Times feature from 2013:

“I’m from a hillbilly town upstate where they hunt deer,” he said. “We walked to the creek with Boone’s Farm a friend’s older sister bought us and listened to ‘Walk on the Wild Side’ on a transistor radio.”

Lou Reed’s 1972 ode to hustlers, transsexuals and transsexual hustlers would alter Mr. Webb’s life. “A friend asked, ‘Do you know what it means?’ ” he recalled. “I did without knowing it. I knew I was a boy that had to leave to go somewhere.”

At 16, he ran away to New York with a pillowcase full of clothes. It was 1975. “Coming into Trash and Vaudeville my first time, I knew I’d found a home and I wasn’t crazy,” he said.

At first, Mr. Webb worked as a bar-back in a gay establishment on the Upper West Side at the height of the neighborhood’s Needle Park infamy, attended hair school (he flunked grandiosely) and was a regular at CBGB. He fell into heroin addiction for 20 years and lived in Tompkins Square Park, eventually returning upstate.

“It got worse before it got better,” he said. “They thought I was going to die. After rebuilding my body and spirit, I wanted to go back to the city I loved.”

He started working at his dream destination, Trash & Vaudeville, in 1999, and remained there until the shop relocated from St. Mark's Place to Seventh Street in 2016. 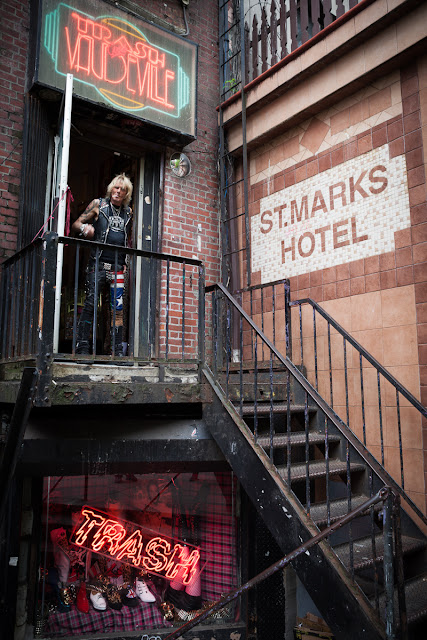 There are many tributes to Webb on Instagram. A sampling:

Bye Jimmy. Rest In Peace. Play some Iggy & Debbie LOUD tonight for Jimmy. This shot from February 2020, The Last Party at @ixneedxmore. Hold that Smile in your heart. 📷 GODLIS.

R.I.P. Jimmy Webb, one of the kindest, coolest, most creative & positive people I’ve ever known. Man, you will be so deeply missed. Love you so much...🏴‍☠️🌹🖤

Rest in rock peace Jimmy. From the last day of Trash and Vaudeville on Saint Marks place 2016 and at I Need More last February with Danny and Iggy 💔

🌹🌹🌹Jimmy Webb. Everyone loved him. I value the time I had with him.

In an interview with EVG prior to the launch, he talked about why he decided to open his shop on the Lower East Side.

Of course the Lower East Side is a HUGE part of my life since I ran away and arrived in the city in 1975. So I wasn’t the least bit surprised when that second batch of angels ended up leading me right to 75 Orchard Street — 75A in fact! How cool is that? I take that leap of faith and run away to New York City in 1975 as a 16-year-old boy. Decades later another leap of faith leaving everything I know and ending up at 75A Orchard Street.

In late February, the shop hosted a “Footprints in February” celebration, in which Debbie Harry and Iggy Pop put their handprints, footprints and autographs in concrete on the floor of I Need More.

His exuberant, all-cap writing style on Instagram posts captured his love of rock 'n' roll and the people who are part of it ...

THE BEGINNING OF A PERFECTLY GORGEOUS NIGHT ! WHEN THE DOOR OPENED AND IGGY AND DEBBIE CAME IN ... TO A ROOM FULL OF LOVE & SHARED THIER LOVE WITH EACH OTHER & ALL OF US !!! .. OF COURSE CHRIS & NINA WERE THERE TOO !!! THE 7th PHOTO SHOWS YOU HOW TRULY HAPPY I AM !!! ... FEEL THE LOVE !!! TOMORROW’S POST IS GONNA BE PHOTO’S OF THE GUEST’S (Well Some Of Them) I CALL “AND THEN THE SAINT’S CAME MARCHING IN” !!! #FootprintsInFebruary #Begins #HistoryInTheMaking #IggyPop #DebbieHarry #ChrisStein #Nina !!! ... YES ! “WE ALL HAD A REAL COOL TIME” ... #IxNeedxMore #WeLiveRockNRoll ALL 7 PHOTO’S BY: CARL TIMPONE/BFA #thankyoucarl

such a sweet guy and a legend. RIP

The patron saint of New York City rock n roll will continue to watch over us, make sure you don't let him down

A beautiful tribute to a beautiful NYC institution. Invictus, Jimmy!

Oh fuck. The hits keep coming. He was a gem of a man. Please universe. No more deaths. RIP, Jimmy.

I found out in such a subtle way, not the usual "Saw it in EV Grieve" way. Gosh, this guy was as much a "part" of this neighborhood as Ray, or Mosaic Man. A true legend.

I am so sad. He is and will aways be a PUNK GOD. Love you, Jimmy.

Several years ago, I was feeling glum about having to walk around in an eye patch after surgery. I went to Trash & Vaudeville and Jimmy picked out a dress to go with the eye patch and made me feel like a total rock star. We had an awesome afternoon parading around the shop.

The city has lost a real star. RIP.

what a beauty, inside and out. so gratifying and unsurprising to see how loved he was by so many! RIP, hope the pants in heaven are tight as f**k!

what a gentleman he always was

Was he Beavis or Butthead from the punk world...
Just kidding Jimmy! RIP my friend.
we luv ya brother!
P.F.

Always respected me and my background.
He always said to me
You can’t erase history.
Acknowledging that my shop was the first punk rock shop in NYC
Opened in 73.
I will miss him desperately. We were working on designs together,I was so very excited about our collaboration.
RIP my dear friend for over 30 years.

Jimmy was a lovely guy, but personally I was never into dressing punk. Back in the day there was no punk look. Everybody did their own thing. That was Punk. Punk as a fashion statement is the anthesis of what punk was supposed to be. Not trying to be a Debbie Downer because I have great respect for anyone who is an outsider so instead of saying RIP ("The microwave dinner of posthumous honors" - Lou Reed) I think the words of Ian Hunter are most fitting-

Rock and roll is a loser's game, it mesmerizes and I can't explain/ The reasons for the sights and the sounds/ Behind these shades the visions fade, as I learn a thing or two/ But if I had my time again you all know just what I'd do.

So rock n' roll's a loser's game, it mesmerizes and I can't explain/The reasons for the sights and for the sounds/The greasepaint still sticks to my face, so what the hell I can't erase/The rock n' roll feeling from my mind

Tears of a clown, will fall down.
Jimmy is not Timmy, but Jimmy.
Blessed is the soul, amen.

Oh, man. This hits home. Jimmy was a fantastic human with a big, wild heart and so full of love. Thank you for everything, Jimmy. I'm going to miss you terribly.