You can now rent the Other Music documentary 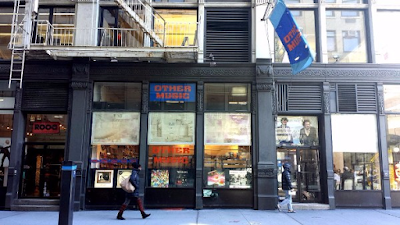 The Other Music documentary is having a virtual cinema release starting today.

The film chronicles the 20-year history and legacy of Other Music, the shop on Fourth Street between Lafayette and Broadway, its influence on music in New York City and its closure in June 2016.

It was originally scheduled to debut Wednesday at the IFC Center on Sixth Avenue. Instead, for a limited time, you may stream it via our friends at Academy Records at 12th Street. (Link here.) Find other rental options here.

Here's an explanation of how it works via the film's website:

A film is offered online, for around the price of a movie ticket, to watch at home. The film will be available via over 50 record shops and theaters across the U.S., who will keep 50% of the net profits to help them get through this incredibly challenging time for small businesses. The rental process will be easy for the viewer. Once the customer purchases the film from the record shop or theater starting April 17 they will be instantly issued a rental via email. The film is viewable for 72 hours once you choose to start playing it on any internet-connected device, including laptops, tablets and smartphones.

Other Music's owners cited rising rents and the growing hardship of selling music out of a physical store as reasons behind the closure.
Posted by Grieve at 5:50 AM

Too hard to watch. Still angry after all those years.
Better not remember what a great place this city once was, denial of what it has became is our friend.

agree with anon above...while I appreciate the doc and memorializing a great institution, it is too sad to relive the final days all over again. went there at least once per week for all the years it was open, bought thousands of records and cds there (and also sold/traded some back). prefer to remember it in good times for all it offered.