The annual Dance Parade will be online in 2020 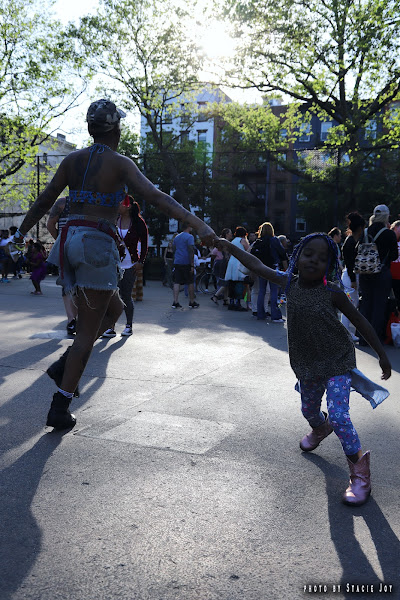 Mayor de Blasio announced this morning that the city is canceling concerts, festivals and all other nonessential events through May — and perhaps even June — in an effort to reduce coronavirus infection rates.

De Blasio said this means the cancellation of the Brooklyn Half Marathon, which had been scheduled for May 16, and SummerStage in Central Park, which had been scheduled to begin June 22. Such events, he said, go “against everything that we need to do to fight back the coronavirus.” He’s also weighing whether to keep public beaches closed, saying “I can’t see” opening them up yet because the outbreak isn’t contained.

Among the cancellations: The Dance Parade, which sees St. Mark's Place as a main route, and the subsequent Dancefest in Tompkins Square Park. The 14th annual Dance Parade was scheduled for May 16. Organizers have replaced it with the Dance Without Borders Virtual Parade. More details on how this will work are forthcoming, per organizers.

This also means there won't be a 44th annual St. George's Ukrainian Festival on Seventh Street on the third weekend of May. There hasn't been an official announcement about this just yet.

In other news from yesterday, the Mayor says that it's unlikely that city pools and beaches will open this summer.

"If things evolve we’ll assess our options going forward, but I can't project it now because it wouldn’t be safe to project it now," he said during his morning presser.

And ICYMI yesterday: Gov. Cuomo announced the extension of New York's shutdown of nonessential businesses to May 15.
Posted by Grieve at 12:30 PM

Not to mention the Joey Ramone Birthday Bash which should have been May 19 probably at Bowery Electric.

pretty easy to distance at a beach

Can we officially cancel SantaCon now, or is this the one event that the city will refuse to shut down?

Pretty easy to distance at a beach? Are you kidding? Tell that to all the kids who went to the beach for Spring Break and got coronavirus.

@Giovanni - I think we all know that the promoters will simply change its name to SantaCorona and make sure it goes on unabated. After all, doesn't alcohol kill the virus microbes?!?

2:58 Have you ever been to a NYC Beach on a Hot SWELTERING Week in July?

A lot of people aren't thinking clearly. Going to the beach is virtually asking for the virus. Are you kidding? LA, SF, Seattle, SLC, and Toronto have canceled Gay Pride already. Why hasn't NYC? Do you think it is a wise idea to bring millions of people from all over the world clustered together in barricades for such an event given what is transpiring right now? Do you think all of those on floats will wear gloves and masks and maintain six feet? I think not. I am befuddled why they haven't canceled it. And I am an out and proud gay man. If it still on, I will not go outside the entire day. After the White Party on Miami Beach, several young men died from COVID-19. Until there is a vaccination or drug therapy, why on earth would anyone in their right mind consider being surrounded by large groups of people either at a parade or at the beach or at a sports stadium? I fail to understand any of it. Mayor DeBlassio needs to step up more.

I hope all the kids dance groups that have practiced so much get to perform on camera then at least...they really do a lot of work in preparation for Dance Parade every year.

"Can we officially cancel SantaCon now, or is this the one event that the city will refuse to shut down?"

@Gojira. And Corona Beer can sponsor SantaCoronaCon and get Federal tax dollars by claiming it as an economic stimulus event. And the city will act like its not even happening until all the Santas are dead, because as everyone on Facebook knows cold weather and beer kills viruses, just like warm weather and wishful thinking. At least that’s what TV Dr. Oz and Dr Phil say, it’s just the flu, right? After all, you’ve never seen a drunk with a cough, cold and a runny nose on a cold winter day, have you?

On the flip side, the dance parade is a legal event with full permits and police protection, and it goes off without a hitch or any garbage or displays of lewd public stupidity or drunkenness every single year, except for when it rains. A few of these parades have been on the first really hot day of the year and they have been some of the best events of the year. It’s like Mardi Gras without the beads or alcohol, just fun music and dancers everywhere, especially the kids from Harlem and the ballet and Mariachi dancers. Now I’m really looking forward to 2021.

So much for our street fairs, and Howl, and the Charlie Parker Jazz Fest, and Summer Stage concerts in the park, and so many other events that make New York great. There’s probably no way they can have the Gay Pride parade this year. You can never skip one of these events again thinking you’ll just go next year, because you never know if it will be the last one for awhile.

PS: Anyone even thinking of going to the beach had better stay away from the public bathrooms, which will probably be closed anyway.

No need to specify events anymore. This year is wiped.
Only question left is, if there are no shows and events, no restaurants and bars, what are we still paying NYC level rents for?

Is it terrible to admit I am enjoying the quiet and the clean NYC air.