If you're feeling the need for speed: Thunderbirds, Blue Angels will be flying over NYC today 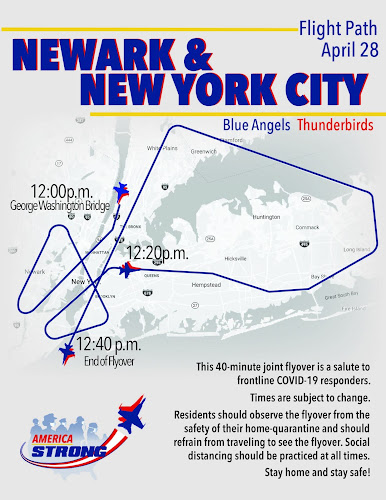 The U.S. Navy Blue Angels and the U.S. Air Force Thunderbirds will be doing a flyover today in NYC in recognition of front-line personnel during the COVID-19 crisis.

This first in a series of flyovers for the northeast, which includes Philadelphia and Trenton, will start at noon here, and last some 40 minutes. (The above map shows you the route, which looks like East Village residents will have a few opportunities to see — or hear — this.)

Also from the release: "Residents along the flight path can expect a few seconds of jet noise as the aircraft pass overhead, along with the sight of 12 high-performance aircraft flying close in precise formation."

You can prep for today by watching this 1986 Van Hagar chestnut...

Headline helper.
Posted by Grieve at 5:20 AM

Veterans on VA disability still have not gotten stimulus checks. The Virus is killing large numbers of Vets in State Veterans nursing homes. VA hospitals have experienced shortages of protective gear and VA staff have died from the Virus around the country. How much are these propaganda flyovers going to cost ? Spend the money on protecting Veterans, VA employees and saving lives not an unnecessary Military feel good stunt to make people feel all is well look at those expensive military aircraft flying overhead suckers. I am a USN Vietnam Era Vet so please no comments from Non Vets.

Maybe one day reality will outweigh optics. Not holding my breath.

@John Penley: Well I'm a non-Vet and I AGREE with you, if that's OK with you. IMO, every available cent should be going to provide the care we promised veterans they'd receive. And that should be true every day of every year, but especially so during this virus pandemic.

Great, just what we need right now. Agree with everything John Penley said above.

While I do not disagree that the VA is shamefully underfunded and vet care in this country can charitably be described as shoddy at best, I also think that if this flyover helps to bring a smile to one tired first responder's face, or makes them feel the gratitude that washes over this city every night at 7, then it's worth it. American taxpayers are asked to fund Chump's endless golf games, to no one's benefit but his, but I have no doubt that hospital roofs will be jammed at noon to see this tribute to bravery, dedication, courage and sacrifice.

Mr. Penley, thank you for your service. You did your part, and I am only sorry we did not hold up our end when you came home.

Too bad the Space Force won't be flying over.

Where is Chuck Schumer when NY needs him the most? Why does NY State send out 150 billion in tax revenue every year it doesn't get back?

Nothing more comforting to New Yorkers than low flying planes over the city.

@9:42am: If the hospital roofs will be jammed with workers watching this fly-over, who'll be caring for all the patients while the workers are on the roof? Either patients will be neglected for some period of time, OR not many first-line workers will get to see this from the their hospital's roof.

This fly-over seems very poorly thought-out in many ways, including showing the flight path and then telling people NOT to go outside to watch it. DUH.

lol no one cares about planes flying over. give the money to the veterans, first responders, frontline workers.no one cares about a damn parade either. this will not get you re-elected, NY politicians. it's a band aid on a bullet wound.

The invisible enemy is no match for our military might! Or wait maybe it's the other way around.

As someone has 2 family members in active military service, this flyover, at this time and date, is just a "Bread and Circus" Trump deflection event. Maybe by mid-summer when and if (and that's a big if) tracking and testing are in place, this event would be OK. And I am betting that all the clueless will be out there today at the river and harbor parks, checking it out, in crowded COVID-19 herds. YOLO!

Mobs of people heading back from the East River near me. Reminded me of the July 4th fireworks ritual.

This flyover is all about Trump showing his military might. It has nothing to do with celebrating healthcare workers. Wake up, people!

Shameful propaganda, as if this quiet creepiness didn’t already remind me of 9-11 the bring in loud low flying planes.
Also is that really the best way to honor all the people saving lives with war machines ?