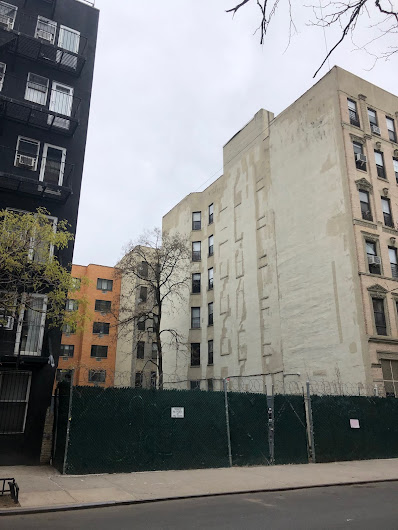 Plans for an 8-floor residential building were filed last Friday for the long-empty lot at 351 E. 10th St. between Avenue B and Avenue C.

This past October, an array of city and federal officials came together during a press conference "to celebrate the commencement of the preservation and rehabilitation of project-based Section 8 housing in the East Village." During this event, officials also noted that more affordable housing was set for this 10th Street parcel.

The pending permit lists that the building will have 28 residences with amenities that include a laundry room, bicycle storage and a 40-foot backyard space.

John Scobie of the NYC-based developer Center Development Corp. is listed as the property owner. It's not clear at the moment how many of these units will be designated as affordable.

Plans for housing here date to 2005 when permits were filed for a 6-floor building with 24 units. The work was never approved though, per public records.

Previously on EV Grieve:
Details on the preservation and rehabilitation of 243 affordable housing units in the East Village
Posted by Grieve at 5:30 AM

Wait. Did I miss something. How did they get permission for 8 floors? Isn't six floors, as a rule, the limit?