Back on May 7, smut peddler BoweryBoogie noted the new Calvin Klein ad on Lafayette and Houston. Yeah, this one in which $3,500 of Nair was used. (Photo via BB too.) And BB has more on this story today too. 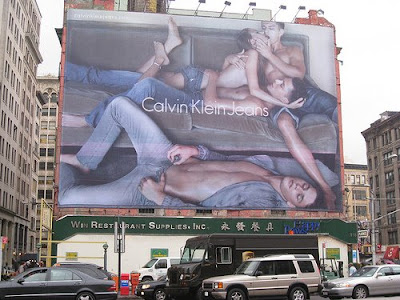 Well, five weeks later, Fox News yesterday, for unknown reasons, trots out folks from central casting to be OUTRAGED over this, this...smut.
Cue the prudey out of towner:

"It's soft pornography is what it is," said Laurie Baranowski, who said she was in New York for a visit. "I don't think that just because you put Calvin Klein's name on it makes it acceptable. It's a beautiful picture, but I don't think that that's the place for it."

(Has she ever seen soft pornography?)

Then there's the do-goody association spokesperson that exists only to be outraged for the media:

"I think that this company has a moral obligation to our country to display their product in an appropriate manner, especially in a public venue where you have thousands of thousands of children who will see this ad," said Randy Sharp of the American Family Association. "I find this kind of ad repulsive, I find it disgusting, I find it inappropriate for a public venue. For my family of five, Calvin Klein will never see a dollar of our money."

(Do they sell Calvin Klein at Wal-Mart?)

Then there's the seen-it-all-New Yorker:

Joaquin Liguas, who heard about the billboard when he woke up in the morning, told FOXNews.com he wasn't bothered by it; he's seen much racier stuff on city streets.

(Who told him about the billboard when he woke up? Where has he been the last five weeks?)

Meanwhile, WIVB-TV in Buffalo checks in...


Other news coverage of this controversy via Google.... 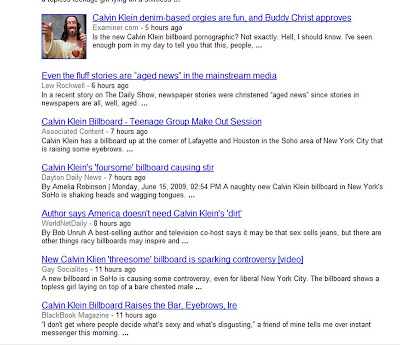 We've come a long way, baby, that people are outraged over a garden-variety NY fashion ad. I mean, come on, hairless models having sex isn't even sexy.
>>has a moral obligation to our country << It still goes back to Giuliani making people think that NYC was a regular part of America. Once they get past that confusion, we'll all be fine.

Nice, dude. I wrote the same this morning. Saw the tv crews out and about last night.

Surely some CK PR flack drummed all this up....

Yeah, our fault. But seriously, Alex has a point. Gotta be a CK inside job.

Open any fashion magazine, right now, I dare you! Like, the kind that nice ladies in Kansas have in the fabric-lined living room magazine basket WHERE THE CHILDREN CAN REACH THEM! Smut, I tell you.

Please pick up your mandatory rose-colored glasses at the kiosk before venturing into the wilds of what was once an intelligent and inspiring city...

I'm offended that people weren't offended by this billboard sooner!

Wow, what a bonanza for the publicist that started this ball rolling. Whatcha reckon this kind of attention co$t$? Perhaps we are witnessing guerilla marketing 2.0?

I gotta admit when I saw it on Sunday I thought, "Wow, that's a pretty adventurous ad!"

I think all the angst is about the guys-reclining-on-guys, though. (With just that one woman present.) If it were four women no one would bat an eye. God forbid there be the suggestion of male homosex.