Report: Police continue investigation into death of Lesia Pupshaw; not treating the case as a homicide 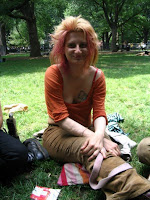 On May 9, Bob Arihood reported that a young woman died, possibly from a wilding incident that occurred the night before in Tompkins Square Park. (Bob has had several follow-ups to this incident. If you haven't already, you may read the posts here... and here.)

In a cover story in this week's issue of The Villager, Lincoln Anderson further explores the case in the death of Lesia Pupshaw, who was 26. (That's Lesia in the photo.) There was speculation that she may have died from a drug overdose.

First, according to the article, the cause of her death has yet to be determined. Test results are pending.

An excerpt from Anderson's article:

"There is no evidence to support" that Pupshaw was killed, said Deputy Inspector Dennis De Quatro. "At this point, it’s not being investigated as a homicide, but as an assault."

But some of the Tompkins Square Park "crusties" . . . say Pupshaw’s head was badly injured in the attack and that police aren’t investigating as thoroughly as if the victim had been a "yuppie."

"There seems to be a reluctance on the part of those in the park to talk to us," the deputy inspector said. "They can come into the precinct” and tell police what they know," he said.

Anderson also interviews Melissa Bishop, who says that at one point she was a suspect in Pupshaw's death.

According to the article:

May 8 was Bishop’s birthday. She and Pupshaw weren’t on good terms because Bishop’s ex-boyfriend, Greg, had broken up with her to go out with Pupshaw. Bishop had been pregnant by Greg, but miscarried. Bishop has a tattoo on her forearm in memory of her lost baby.

"She didn’t like me because I was carrying [Greg’s child]," Bishop said of Pupshaw.

Pupshaw’s presence in the park on Bishop’s birthday was not welcome. The two had words.

Bishop said she cursed out Pupshaw, then turned on her heel and started to walk off. Immediately afterward, she said, she heard glass breaking. Turning back around, she said she saw Pupshaw getting up off the ground and heard her say, "Look at my eye. Look at my eye."

She also said that police weren't taking "Pupshaw’s death as seriously as if she was some yuppie-ass rich woman."

"Absurd" was De Quatro’s response to that accusation. "It’s our duty to investigate the assault. If you are assaulted today and you die in an automobile crash in New Jersey tomorrow, we still investigate. One’s got nothing to do with the other."

De Quatro also disputed accounts that a roving gang of local teens is responsible for the recent attacks in the neighborhood. "As for documented incidents, we have that one weekend back in the beginning of May involving this group," De Quatro told Anderson.

The photo of Pupshaw is from Flickr. The urls to the photos were left by a friend in the comments of one of Bob's posts.
Posted by Grieve at 7:15 AM

Email ThisBlogThis!Share to TwitterShare to FacebookShare to Pinterest
Labels: crime, Neither More Nor Less, The Villager, Tompkins Square Park

Ok, so we don't know the cause of death yet, but that should not deter from the fact that this woman was violently attacked and justice has not been served.

In the weeks that followed, there were several more attacks in and around TSP and these were never in the news. Meanwhile, reports of attacks in the W Village were on every news channel and in the papers. There's an obvious neighborhood prejudice going on here, which I find outrageous.

Thanks to you, Bob and a few others who care, we are aware of the current danger, but otherwise, I feel the EV is totally forgotten by the police, media and government. The only way to preserve the dignity of our neighborhood is for residents themselves to stand up, take responsibility and fight for our right to live safely in the place we love.

Thanks, Goggla. It's fortunate that we have Bob Arihood reporting on what's going on ... he's out there every night.

I have heard from a few readers who said they've seen more cops on horses in the neighborhood (specifically At A and B at 14th Street...) I haven't seen them myself. Of course, this is during the day, which doesn't seem to be of much help, other than providing photo opps for tourists.