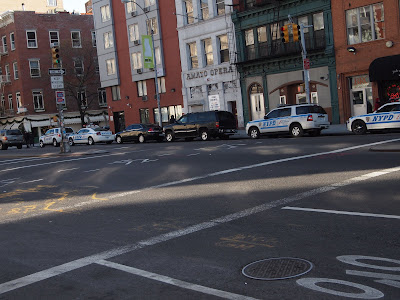 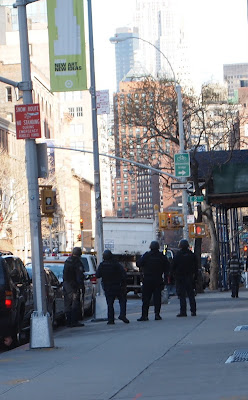 We spotted four heavily armed NYPD officers this morning — decked out in riot gear and whatever kind of heavy artillery that they carry — on the Bowery between Second Street and First Street... it gave the tourists walking by something to talk about... One tourist nervously approached one of the men, who responded they were just on "routine patrol." Uh-huh.
Posted by Grieve at 11:14 AM

Email ThisBlogThis!Share to TwitterShare to FacebookShare to Pinterest
Labels: NYPD, the Bowery

Yeah, I ran into a group of officers like this outside St. Marks book store a few weeks ago. I approached one of them and asked, "What's with the heavy artillery? I've never seen you guys down in the Lower East Side before" the ultra humorless officer responded in the same blase fashion. I realized instantly (as soon as my silly words left my mouth) that a normal conversation with any of those guys would be futile so I just said, "good luck" and walked away. Mind you, I'm a petite female and was wearing a conservative but classy ensemble that evening so I think I got a pass (I was obviously not some punky kid). :)
-H

saw them on 4th and bowery going in and out of a building next to phebes which now appears to be a clothing store, running out some hobos perhaps?!?

Their "routine patrol" is like that of the SS in nazi Germany....

It's all showcasing anyway. Their weapons have no ammo and they're not doing anything more than getting the public to ACCEPT that it's "normal" to have heavily-armed and outfitted jack-booted thugs walking round in their midst.

A few years back, when one of these machine gun toting nazi scum were confronted in Union Square Park by a group of political activists, he stood fast, like one of the palace guards in London> A creepy guy in a suit with a wire in his ear suddenly appeared and whispered something into the pig's ear -- the cop quickly retreated.

People need to confront these creeps wherever and whenever they see them to let them know that they are unwelcome and unwanted!!

ever since 9/11 there have been groups of heavily armed guys in uniform appearing at tourist places - i used to see them a lot at south street seaport, grand central station and on the outskirts of where the wtc used to be.
haven't seen them in a while.
they don't make me feel any safer.

i hate seeing these guys anywhere, especially in the east village. f*ckin creeps is right.