Unruly patron tosses trash can through the HiFi front windows

A tipster passes along word that an unruly patron tossed a trash can from Avenue A and 11th Street into the front door and window at EV Grieve favorite the HiFi... 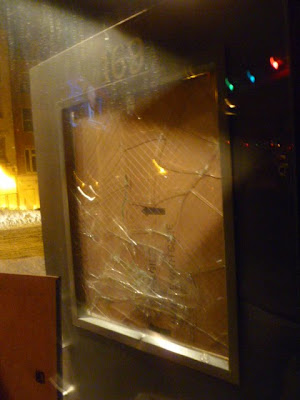 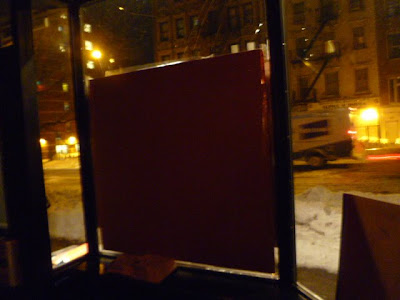 Per the tipster, the patron — known to those in the bar — became verbally abusive Sunday evening and was told to leave. He walked to the corner and returned with the trash can. Which ended up in the window. Given the blizzard, the police couldn't immediately respond to the scene. The bar did file a report later, though.
Posted by Grieve at 6:59 AM

Email ThisBlogThis!Share to TwitterShare to FacebookShare to Pinterest
Labels: Avenue A, HiFi

Was he wearing a Santa suit? Was his collar popped? Did he reek of Drakkar Noir? Details people!

Kids do the darndest things.
-H

I live above this bar and I've never seen anything like that even when it was Brownie's.

HiFi is a great bar...and neighbor...This was just one of those random things that happen... The guy was pretty nuts,screaming racial slurs, from what I was told....

I,Paulie,with the help of the NYPD,apprehended the guy,tonight.8 months later,but we got him. This is the same guy who's been a nuisance to the majority of bars in the neighborhood. Let's hope that the system will work,and this guy will not only no longer be terrorizing bars and patrons,but get the help he needs.This Guy's got PROBLEMS.