Exclusive: Q-and-A with the bike that became an iconic symbol of the 2010 Holiday Blizzard

This photo by Mario Tama for Getty Images became one of the iconic shots of the Blizzard of Dec. 26, 2010.... Around the globe the shot — now known as The Shot — became associated with the devastating wallop that Mother Nature cruelly delivered the East Coast after Dec. 25...

The bike currently resides on Avenue C at Eighth Street... 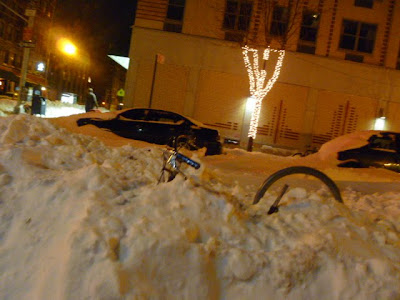 We caught up with the rather ornery bike for a wide-ranging interview on everything from new-found celebrity to Forever 21.

There are thousands of bikes buried in the East Village right now. How did the photographer pick you?

I don't know, but I'm thankful for the exposure.

What does your owner have to say about the photo?

I haven't talked with her about it yet. I think she's stuck upstate with her sister. To be honest, I haven't seen her much lately.

I notice that you don't have a seat. What happened?

It went missing right after Germany beat Argentina in the World Cup this past summer. Some drunk guy with a German flag yanked it off and threw it across the street. He laughed and yelled "Deutschland! Deutschland! Deutschland! Deutschland!" [Pauses] I was in a bit of shock. A few minutes later, an ambulance went by and ran it over. I saw the manager from the laundromat clean it off the street and throw it away. I haven't been taken for a ride — so to speak — since then.

Where did you grow up?

The West Village. I liked it there, but my owner got married, and she turned to yoga instead. I ended up on Craigslist. It didn't help that her new husband is a neurologist. He is really over-protective. He even makes her wear a helmet while taking a shower. [Laughs] I heard her talking about it on the phone on the way to Gourmet Garage one day.

I didn't know that people still went to Gourmet Garage.

Tell me about it. She liked their instant meals. Not to mention their scallion egg salad.

So what do you think of this neighborhood?

Specifically Avenue C and Eighth Street? Or the East Village in general?

I think it represents the best of the neighborhood's rich history and diversity. You have all sorts of people living here — families who have been here for generations, newcomers, singles, newlyweds. And everyone seems to get along.

Probably the weekend drink-and-drown brunch crowd at the Sunburnt Cow. These people from God-knows-where show up and get really smashed. They stagger away. When I had a seat, someone was always pausing here, putting cell phones or purses or iced skim lattes on me. And they all dress alike. You can only pull off Forever 21 for so long.

The Times declared Avenue C the next big thing back in 2005. From your vantage, what do you think?

There is a bit of carpetbaggery going on with some of the new upscale bars and restaurants, but I still haven't seen an influx in, say, Trek Speed Concept time trial bikes chained up along here.

I find it hard to believe anyone would chain up a bike like that outside.

You'd be amazed at what I've seen chained up.

What do you think of the city's new bike lanes?

Obviously I'm supportive of anything pro-bicycle. My owner likes them. I do take issue with the segregation. You have your bus lane, your bike lane. When will Bloomberg start calling the sidewalks the People Lane? Do you really want to walk on something so seemingly condescending? So it's no wonder that so many cyclists prefer to use the other parts of the streets.

What is your impression of NYC motorists?

That's an awfully broad question. In general, I dislike cars, especially rentals — the weekend warriors who get the Zip Car like once or twice a year. They're not [used to driving] on a regular basis, and they do stupid stuff, such as turn left from the far right-hand lane.

[Sighs] "Breaking Away." It's an unerringly accurate coming-of-age story about four discontented blue-collar young men spending their last summer of freedom in Bloomington, Indiana. They are unemployed and patronized by snobbish students....

[Rudely] Please let me finish. "Breaking Away" is funny, deeply moving, painfully honest: at the end you feel good in a rather special way. Plus, I've always had a Dennis Quaid thing. He can sit on me any day.

True. I'm told that he gets steady work on TV, though. I don't see much TV. Which is likely a good thing considering there are so few good parts for bikes these days. I did see some of "American Chopper." Not bad.

Best thing about your new-found celebrity?

Some tourists looking for McSorley's have done some FlipCam stuff with me...

McSorley's? A little off the beaten path?

[Chuckles] Yeah, they said this guy in front of Ray's said that the bar is on Seventh Street and Avenue D. Anyway, the boys at the deli at Associated have brought me some egg-and-cheese sandwiches and rotisserie chickens. That's sweet, though I'd prefer some air and oil. And a seat. 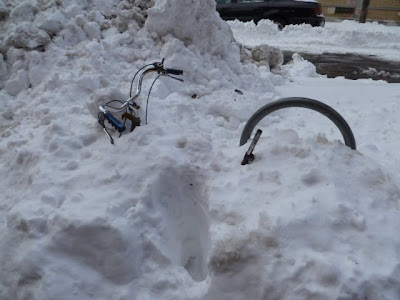 Gee--I've seen you on better days. I pass by frequently and you are always saying "I want to go to the gym with you".

Or at least for mayor. I have no doubt he'd do a better job than Bloomjerk, and he'd probably have himself plowed out by now.

Delirium has set in.

HOLY MOTHER OF GOD this is some fantastic self-involved navel-gazing.

@Marty - That pun was wheely awful!

Thank you for being such a willing subject that evening. I’m sorry I didn’t help dig you out, but as a photojournalist you have to understand I’m not allowed to intervene, it would compromise my objectivity.

Denis Quaid can sit on me any day, too, lol.

@Lisa: I know, oh well, you can't Schwinn them all!

getting pretty "tired" of these puns guys..

@Marty - Raleigh now, this MUST stop!

yes, please, get a handle on yourself!

@Lisa and glamma: Okay, okay, I'll stop. You don't have to get Huffy about it!

What will become of the bike? The suspension is killing me!

It's joyous times likes these when I wish Patrick Swayze were still alive to share in our amusement. :*-(
-H

@East Village Eats - The bike will be fine, I'll seat to it. Promise!

@Lisa: Ha ha ha! I surrender to you (and so should you East Village Eats), you are the Queen of the puns!

@ Marty Darn, I was just gearing up! Oh well, I concede defeat.