Finally, your chance to own the 3-level penthouse at the Brownstone East Village 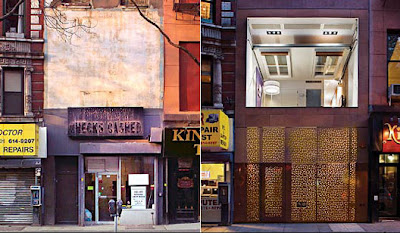 The building at 224 E. 14th St. near Third Avenue remains a rather interesting work of over-the-top luxurious architecture. (Check out Curbed's archives on the place here.)

Workers began renovating the space about five years ago... and developers added some of the more curious amenities to blow up the neighborhood, such as a retractable glass wall that we've never actually seen retract. (Think of those views of IHOP!)

You can see a before-and-after up above courtesy of New York magazine, who got inside the place a few years back.

Otherwise, this place has seemingly been as transparent as the Kremlin.

Until now! The listing for the building's penthouse (which, we think, belonged to the developer, Carol Swedlow) just hit the market. It doesn't disappoint. According to Corcoran:

A Penthouse triplex condominium in the East Village: This two-bedroom, two full and two half baths loft residence is accessed directly via keyed elevator and sits on the fifth, sixth and seventh floors including a private outdoor terrace & full roof deck. On the sixth floor, with 12' ceiling heights the living room is sun drenched facing south and the kitchen is suffused with northern light through a glass fold-away automatic garage door that spans the entire length of the building, and opens to a setback dining terrace. On the top floor, a rooftop cabana opens to a 608 SF private roof deck with N,S,E,W views. The fifth floor is split between 2 bedrooms and 2 full baths. An unbelievable layout. 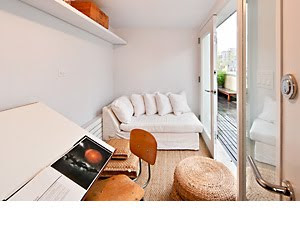 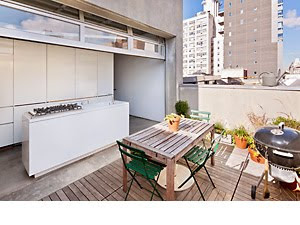 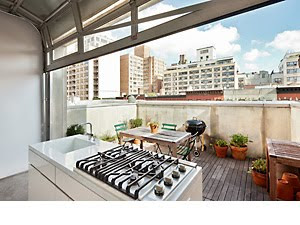 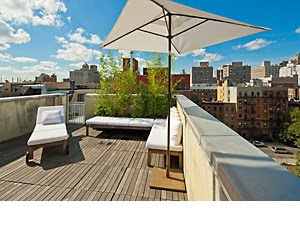 The sticker price isn't even the crazy part. It's the 4000 dollars in common charges and tax that you're paying on top of your mortgage every month!

At 224 East 14th Street, we provide you with the top most exclusive luxury building in the throbbing heart of a 5 star luxury block! And if your VCR breaks, the Cable Doctor is right downstairs! While you're waiting, get treated like royalty next door at the Kings Head Tavern – 5 PBR tall boys are only $9 dollars!

Notice how the sunlight creeps between the bracket for the garage door and the wall in the third photo? The buyer will have fun stuffing it with newspapers all winter long! That reminds me, I need to call my grandmother.

Oh, but on the plus side, the patio does provide an adequate space to escape the shoe box sized apartment and will make a lovely launching pad for the jumper... I mean buyer.