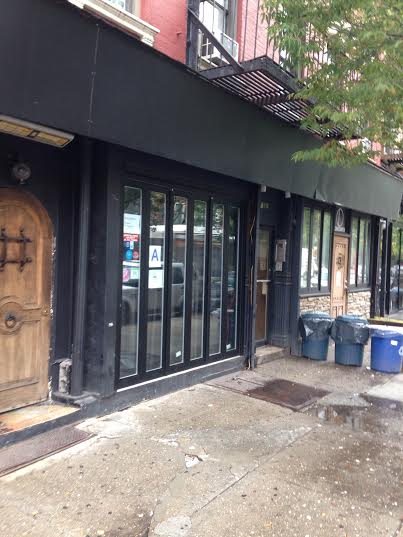 Babel is currently downsizing their hookah empire at 129-131 Avenue C between East Eighth Street and East Ninth Street. They are vacating the space at No. 129, which was home a few years back to the neighborhood bar Duke's.

As for No. 129, Robert Ceraso and Jason Mendenhall, who own The Wayland on Avenue C and East Ninth Street, have plans to open a new venture in the space called The Drift.

We asked Ceraso for more details.

"We are planning a neighborhood bar," he said via email. "No cocktail list. No high concept. Just a relaxed little neighborhood place for all of our neighbors who have been so great to us over the last four years at The Wayland."

They will go before CB3's SLA committee on Oct. 19 with their plans. (Find a PDF of their CB3 questionnaire here.)

"When that space was brought to our attention, the first thing we thought was of Duke’s and how Avenue C doesn't have a friendly little neighborhood place any more since Duke’s and Teneleven closed down," he said. "As much as the neighborhood supports The Wayland, we understand that sometimes people just want a relaxed drink without the live music, the crowds and the cocktails lists."

The Drift will also serve a variety of tacos and salads.

"We envisioned The Drift as a laid-back bar that takes some slight inspiration from small seaside bars that we’ve been in over the years," said Ceraso, who recently opened Good Night Sonny on First Avenue and St. Mark's Place. "The little places that have a mix of locals, surfers, backpackers and expats. My partner Jason and I have had a lot of experience in those bars over the years and the feel of those places has a special place in our hearts."

Email ThisBlogThis!Share to TwitterShare to FacebookShare to Pinterest
Labels: The Drift, The Wayland

Envisioning a "laid-back bar" does not mean that is what we will get. Open facade is the first bad indication that noise will be let loose onto the sidewalk for neighbors "not" enjoy. Quiet bars do not make enough money to bar today's insane rents so let's be real, howling drunks and louder music will be coming if this place opens. Sorry to be such a cynic but we have seen this soft sell many times already and the bait and switch is really obvious now.

I like Wayland and the new one on St Marks. The crowd? Eh, but that's how it goes these days. I think the owners are good people.

There's no way this place could be louder than Babel. The guys from Wayland are kicking ass! Not to mention they're super friendly folks. I wish them luck.

Surfers and backpackers, now that's a niche LES has ignored.

It'll be nice to having a bar to go to enjoy the sunset after a day swimming in the East River.

I just realized this is right around the corner from me; I'm not looking forward to the crowds of smokers on the sidewalk while I'm trying to walk the dog.

Those people are already there. Nothing new.

I'm not sure why everyone has to be so negative and quick to hate. I have lived in the neighborhood for quite some time, happen to like the Wayland, think they are doing a great job and were a nice addition to Avenue C when they opened. Don't knock that garden margarita if you have never tried it! While I agree that some of the new places bring in losers and a-holes from god knows where (I personally admit that I avoid going out on Saturday nights and opt for our local places on weeknights), at least those places can afford the insane rents and are not yet another bank, 7-11 or closed down storefront attracting drug addicts, beggars and street drunks. Why doesn't everyone make it a point to fight the a-hole landlords for kicking out longtime business tenants instead of hating on people who will now have opened 3 nice businesses in the neighborhood? I just don't get it. I am looking forward to trying both new places by these guys.

Can they just pleeeeeaaaaaassse Change the storefront so that it doesn't open up like it is set up now? It is crazy unkind to the neighborhood to be wide open and inevitably loud. No matter what the owners say they plan to do that has to change.