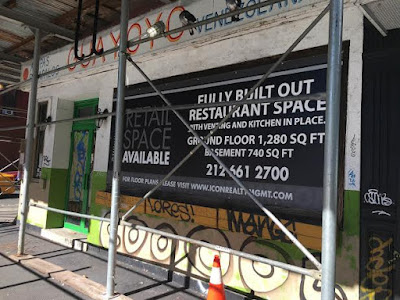 The for rent sign via landlord Icon Realty is up now at 67 First Ave.

Per the listing, the location at Fourth Street is "Perfect For: Restaurant, bar, clothing store, salon, and all general retail uses."

It was a perfect location for Guayoyo, the family-owned Venezuelan restaurant. On the morning of Jan. 13, 2015, a fire broke out in the basement of the building. In a follow-up inspection, Con Ed discovered a gas leak at the address.

In April 2015, an employee said they hoped to have the restaurant reopened soon. That never happened as repairs and red tape ensued with the landlord and Con Ed. (Read more about the situation here.) As we understand it, Guayoyo vacated the lease in August ... 20 months after the fire.

A message posted on Guayoyo's Facebook page on Aug. 30 reads in part: "Unfortunately we are forced to close the doors despite the efforts made to ensure its reopening during this year and a half of forced closure due to circumstances beyond our control."

Previously on EV Grieve:
Guayoyo has been closed now for 1 year
Posted by Grieve at 4:22 AM

Another business bites the dust because of ICON's greediness!

Icon? Gas leak discovered? A family-owned business put out of business? What a coincidence!

Walk through the E.V. and notice all of the vacant store fronts with Icon signs in the windows. There should be a law.

Work halted at 97 St. Marks Place due to Dept of Buildings in the former Yaffa space. Does anyone know what happened?
http://a810-bisweb.nyc.gov/bisweb/ComplaintsByAddressServlet?requestid=1&allbin=1077649&fillerdata=A

Yeah, what's the deal with Icon emptying out all these business spaces that then sit empty for years? The former Cafe Pick Me Up has been a vacant drag on that corner for ages now! Icon may be trying to destroy the essence of the EV, but they might end up lowering its value if all these swaths of storefronts sit empty for so long. (And how much is Icon paying Con Ed?)

Maybe they are letting the storefronts site vacant and ask for outrageous rents so they can leverage the fake higher rents into new, bigger mortgages for their many new building purchases. Hopefully it will land them in the same place Croman is, in court and soon, in jail, i.e. "A.G. Schneiderman Announces 20 Felony Charges And Civil Suit Against Major New York City Landlord Steven Croman." We can only hope.

$20,000 a month!? That's most peoples salaries in the Lower East Side a year. They're going to drive theirselves to hell, Icon, that is.