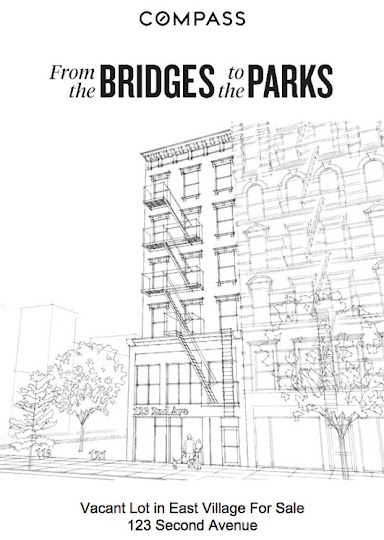 ["Building sketch for illustration purposes only," via Compass]

Back in March, George Pasternak, the landlord of 123 Second Ave., put the vacant plot of land up for sale, asking $9.7 million.

Now, The Real Deal reports the lot has sold for $6 million. According to records filed with the city today, the new owner is traced to Ezra Wibowo under the LLC 123 Second Ave. Corp. (TRD was unable to track him down to ask about his possible plans for the site.)

123 Second Ave., which housed Pommes Frites and Sam's Deli, was destroyed along with two others on March 26, 2015, after a fatal gas explosion next door.

According to the marketing materials from the Compass brokerage firm that a tipster shared with us in March:

Vacant lot (25’ x 100’) for rental or condo development with commercial overlay offered for sale. 1031 exchange opportunity, in prime East Village location (2nd Ave and 7th Street), and currently zoned C1-5/R7A. FAR ranges from 3.45-4.6 subject to the DOB approval of proposed/planned build out, to be filed by potential purchaser post closing. Building sketch for illustration purposes only.

As Lois Weiss at the Post reported at the time:

[A]ll three properties were reclassified from apartments in Tax Class 2 to vacant land in Tax Class 4, which will bump their expected rates starting July 1.

While only Pasternak’s lot is for sale, each of the three lots, including the corner at 119 Second Ave., can host 10,000 buildable square feet for apartments, residential condominiums plus stores.

Only No. 123 had been on the sales market. (According to reports, the city charged Pasternak $350,000 to demolish his building.)

Maria Hrynenko, the owner of 119 and 121 Second Ave. faces various charges (along with four others), including involuntary manslaughter. There have not been any updates on when this case might go to trial.

The sketched building fits right in with the neighborhood.

in this day and age that's practically free!

I'd like to see the other two lots become a park!

Gas line spliced so many times, saving money to keep up with rent. We lived a block away when it happened, thought it was a con ed underground connection that melted and blew up as per usual.My partner was lucky to be in a bodega half a block down. They used to burn the rent stabalized buildings to the ground...faulty wiring. At least it gave people a chance to get out. Gas leak .. hmm smells like a gas leak ..hmmm ka boom. Very sad news in tbe bronx you tap into those gas lines untrained kaboom, we lost a great man firefighter chief today over the same nonsense. WHOS IN CHARGE?

I doubt what's built there will in any way, shape or form fit in with the neighborhood. I'd love to be proved wrong, but since experience is the best teacher...

Likely a glass monstrosity for assholes with more money than brains. Bar on the ground floor. And definitely no room for the people who were displaced, right?

a good sale price for the time.