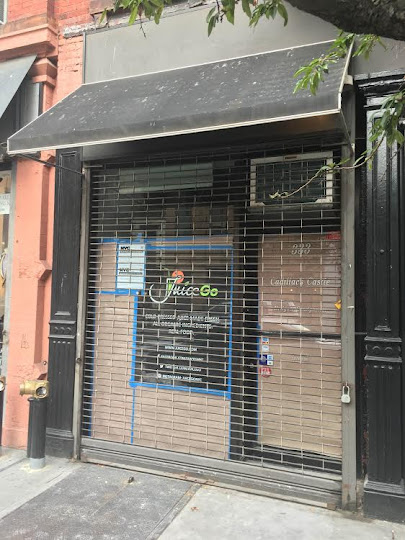 This appears to be the first location for JuiceGo, which will specialize in fresh, cold-pressed juices and other healthy choices.

JuiceGo is opening in the East Village aiming to give New Yorkers the tools to eat healthier by allowing them to customize their own cold-pressed juices, smoothies, salads, sandwiches, and much more. We have created our own cold-pressed juicing system that allows us to make the freshest cold pressed juice in the city because we can make it as soon as a customer orders. None of our juices at JuiceGo will be made at an off-site facility in mass quantities, then delivered to our stores compromising the freshness.

As for the juice element, it seems to be a pretty crowded market right around here... beginning with the beQu Juice shop nearly directly across the street... 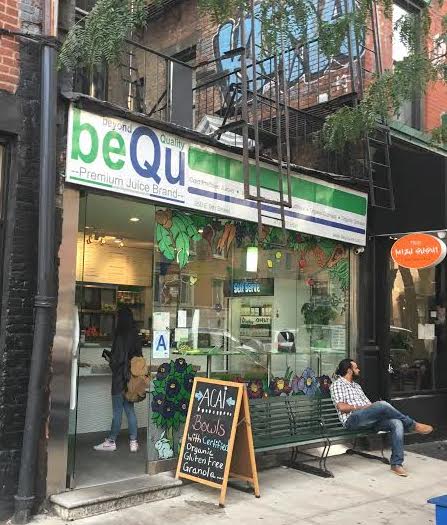 JuiceGo is expected to be open later this fall.

Cadillac's Castle, the consignment/thrift shop, closed here back in the spring. There wasn't any official explanation about the closure. Jared Kushner's Westminster Management is the landlord here.

Nothing that JuiceGo is doing (customization, cold-pressed juicing, uncompromising "freshness") is anything the eleventy million juice places Grieve mentioned aren't already doing, and no one really "juices" that much anymore -- smoothies and the dreaded "bowls" being the preferred items -- and yes, I'm sure they'll have that stuff, too. But no one is "giv[ing] New Yorkers the tools to eat healthier" in the East Village in late 2016. It's always a little sad to read the hopeful promotional copy of businesses that are way late to a trend.

Buy a juicer and organic vegetables and you will have the tools to eat healthier and the machine will soon pay for itself. I use an Omega. It's a bit of a hassle but not like making your own cupcakes or rolled ice cream.

One more hope that will be crushed when the reality sinks in that this niche type of foodie emporium has very limited floatability in an already saturated market. Six months.

Too late to the game although I wish they well.

There is probably a neighborhood or two (!) that is actually "under-served" by juice bars. The East Village isn't one of them...

Juice is the new pizza. Everybody thinks it's a good idea. Then they go out of business.

Anon 10:59, nobody's "hatin", but you have to stand amazed, given the listing EVG supplied with this post, why people enter an already saturated market. The hype from their website or facebook page is filled with airy sentences about how special they will be. In reality as people have already noted they are not that special and don't appear to fill a void in the EV. You just read their announcements and ponder at the lack of business acumen of so many start up shops.

the bullet shaped juice maker is superior..it uses all of the fruit in the juice as opposed to a juicer which leaves the pulp out..

Just wait until we open guys, I believe many of you will change your mind. We are not the same old thing. Thanks for the article though, much appreciated.

Just wait until we open guys, I believe many of you will change your mind. We are not the same old thing.

Homeslice, I am a health nut vegan smoothie addict, and let me tell ya, unless you somehow have reinvented fruit itself (and why would you? it is already perfect), you ARE the same old thing.

but good luck to ya

JuiceGo. Mmm-hmmm, and I have no doubt they will, probably sooner than they think. There's only so much you can do with juice.

the bullet shaped juice maker is superior..it uses all of the fruit in the juice as opposed to a juicer which leaves the pulp out..

The Nutri-Bullet™? But you can do that at home!

Actually, the Vita-Mix™ has been the top of the heap for over 40 years; it also makes "total juice."

Sometimes a place can come up with something new. There are a number of cupcake/dessert/donut places and yet Dun-Well Donuts on St Marks seems to be working as they have excellent vegan donuts. Or who could have predicted that Xian Famous Foods would take off as it did in a neighborhood that has its fair share of Chinese/Asian eateries? But it did. All depends on the product, the management, and the staff they hire. Some places with great food have absolutely been torpedoed by the staff which they hired. Or the food was not that great. Or management had its head up their respective butts.
Best case scenario, it is a hit! Worse case a learning opportunity!

Just curious as there are empty storefronts, what do you think would be a good idea to open?

On 120 Saint Marks Place next to Prince Spa supposedly they will be opening a marshmallow place.

Given the monkey-see, monkey-do imitative reflex of EV retailers, I am hoping for a freakin' tsunami of dim sum places once Tim Ho Wan opens on 4th Avenue. I've said for years that a good Chinatown-style dim sum and roast pork/roast duck hole in the wall would KILL in the EV...I get tired of schlepping to Canal Street.