A good hair day: Investors pitch in to save Astor Place Hairstylists from closure 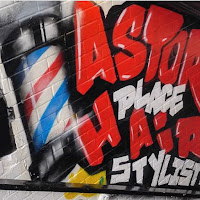 A group of wealthy investors has come together to save the Astor Place Hairstylists. The nearly 75-year-old NYC institution was set to close this week after business dropped by 90 percent during the pandemic.

However, as the Post reports, enough money has been raised to keep the subterranean barber shop "open for at least another 75 years."
Financier Jonathan Trichter and a group that includes Mike Bloomberg adviser and former Hillary Clinton aide Howard Wolfson, pollster Jefrey Pollock and gaming mogul Jeff Gural put in the money to keep the business afloat. (PIX 11 reported that the current owners are leaving; that "some of the new owners are clients, as well, keeping things in the family.")
Trichter said that he has been a customer since 1983. Gural owns the building at Astor Place and Broadway, and waived the rent for the time being.

Gural told the Post that both Trichter and Mayor de Blasio separately reached out to him to see if he could help stop the store’s shut-down — and it was a no-brainer for him.

"Nobody wanted to see it closed," Gural said. “They’ve been a great tenant."

Saved, yes, that that's a win - but as noted in the fine print, the Vezza family will not own it any more. It remains to be seen how this plays out over time.

It's a buyout, not save per se.

This is nice. But not every business owner can depend on the wealthy to sweep in and save the day. Business rents shouldn't be so high that businesses can barely keep up even in the best of times.

As close to a NYC real estate miracle as you can get.

One down, few hundred thousand to go.