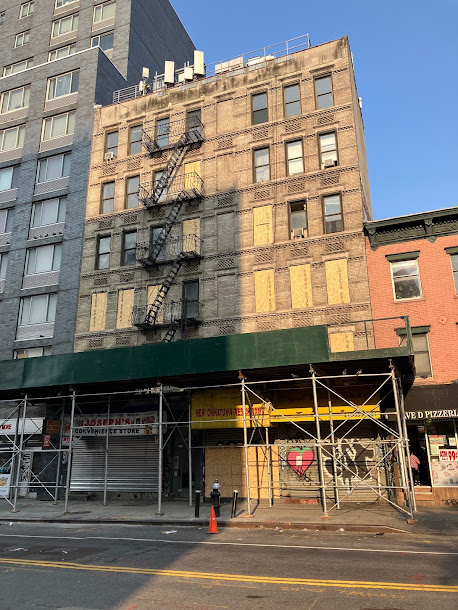 Here's a look at 11-13 Avenue D one week after a two-alarm fire caused smoke and water damage in the 6-floor residential building between Second Street and Third Street.
Windows on several of the 16 residential units are boarded up. The city also issued a full vacate order on the premises... 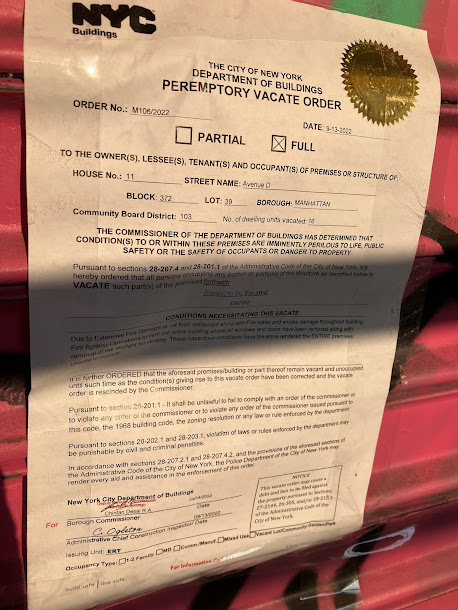 Due to extensive fire damage at 1st-floor restaurant along with fire, water and smoke damage throughout building... fire fighting operations to vent out entire building where all windows and doors have been removed along with removal of the skylight for venting. These hazardous conditions have therefore rendered the ENTIRE premises unsafe to occupy.

The fire has also shut down the three retail establishments at the address: Joseph's Convenience Store, New Chinatown Restaurant and Royal Fried Chicken.
Sources said the fire started in the New Chinatown Restaurant, which was not open at the time. An EVG reader and resident of the building left a comment on the post about the fire stating that no one was injured.
The FDNY has not released an official cause of the fire.
Posted by Grieve at 5:00 AM

I'm really sorry for the residents of this building.

Does anyone have any follow-up to the fire at Odyssey House on 6th Street? Some windows are boarded up, but it looks like people may still be living there.

Is/has anything been done to help these tenants? This is a terrible situation.

Yes, what is being done to help the tenants?

(Note to everyone who can even vaguely afford it: get renters' insurance!!! Costs about $30 a quarter for people with normal amounts of possessions.)

My friend lived here and NO, no one is helping them. He has nowhere to go after he stays with a few friends this week. There’s no word how long it will be before he can return, hotels are booked or $600 a night and the Red Cross only covers $500. On top of it all looters got into the building and stole his vintage guitars since the windows were smashed.