A new broker for 44 Avenue A 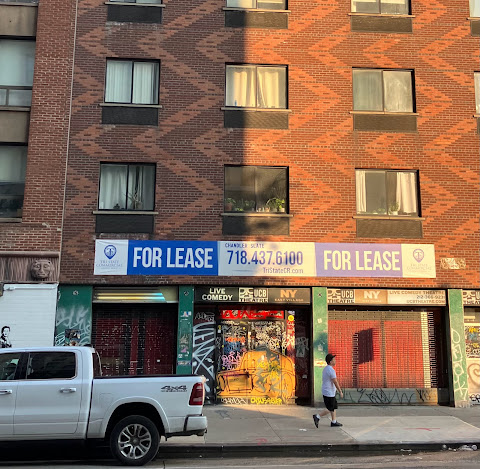 New broker signage went up late last week outside 44 Avenue A at Third Street. The long-empty (three-plus-years) storefront adjacent to Two Boots was previously the Upright Citizens Brigade Theater's East Village outpost, UCBeast.
It's a large space — 3,300 square feet over two floors, including a 99-seat theater ... with entrances on Avenue A and Third Street. 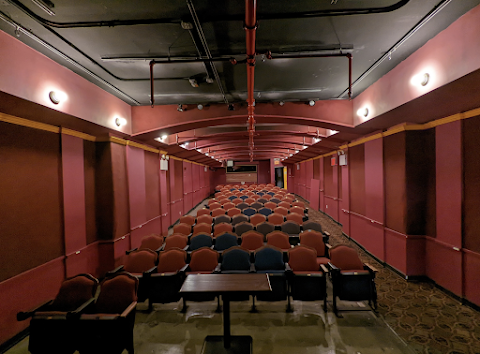 No word on the asking rent via the new listing. (Theater image about via Tri State Commercial Realty.)
Citing financial difficulties, Upright Citizens Brigade Theater closed UCBeast in February 2019. The comedy venue first opened in September 2011. UCB took over part of the expanded Two Boots empire — the video store on Avenue A and the Pioneer Theater around the corner on Third Street.
The Pioneer Theater, which screened indie, underground and cult fare, closed on Nov. 7, 2008, after an eight-year run. As owner Phil Hartman said at the time: "[I]t was always a labor of love and never commercially viable."As noted before, we've talked with several residents who'd love to see the space used for some type of cinematic venture similar to the Metrograph, the boutique two-screen theater — which also features a restaurant, a bookstore and a lounge — down on Ludlow Street.
In the spring of 2021, Marcello Assante was looking to open Cinema Paradiso here... a cafe, restaurant, and center for cinephiles to enjoy foreign and independent features. However, Community Board 3 would not approve a full liquor license for all hours of the space, which Assante argued was necessary to help the venture be profitable.
Posted by Grieve at 4:50 AM

I guess we can rule out Knitting Factory for this space.

It's a shame that Cinema Paradiso was shot down. I was really looking forward to that.

Loved The Pioneer and it would be really great if this could be a cinema again. Maybe with a focus on local filmmakers with post-screening talks. Might be a better way to fill seats (the filmmakers will promote their events) than just trying to get people in there for indie and retro films. I go to The Metrograph often and it seems like they might be struggling.

The CB3 SLA committee works in very strange ways they approve fancy bro bars based onn stipulations (that don't mean squat to the owners) on very residential blocks and reject this preservation of a plus to the community... shaking my head in disbelief