One of the city's most iconic skate spots will have a new look and feel by the fall of 2023.
Next year, the Parks Department will reconstruct the multipurpose courts in Tompkins Square Park along Avenue A and 10th Street, adding various amenities, including a two-lane seal-coated walking loop, and new asphalt.
City officials unveiled the plans during Community Board 3's Parks, Recreation, Waterfront, & Resiliency Committee virtual meeting this past Thursday (as we first reported here). Max Goodstein, a landscape architect with the Parks Department, provided a brief overview.
The space, he said, has a lot of "asphalt structural damage," and it "needs to be replaced and repaired. And the only way to do that is to take all the asphalt down to the sub base and put new asphalt down."
Other additions: new benches, a kickball court, a high-low fountain that kids and adults can use simultaneously, and three new basketball backstops at the eastern end, replacing the ones that always seem to be damaged. 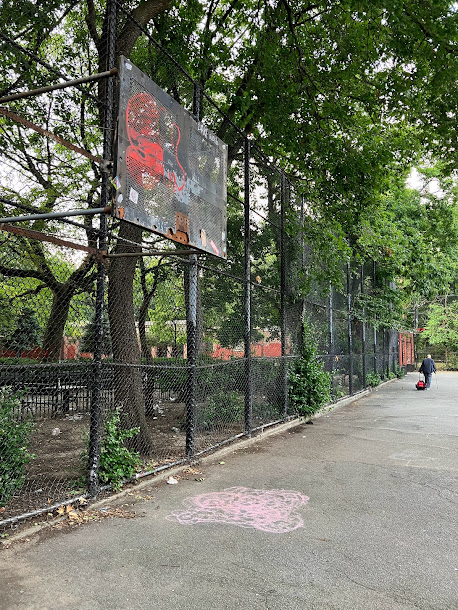 Workers will also remove the dugouts and backstop as the Parks Department no longer permits softball games in this space... 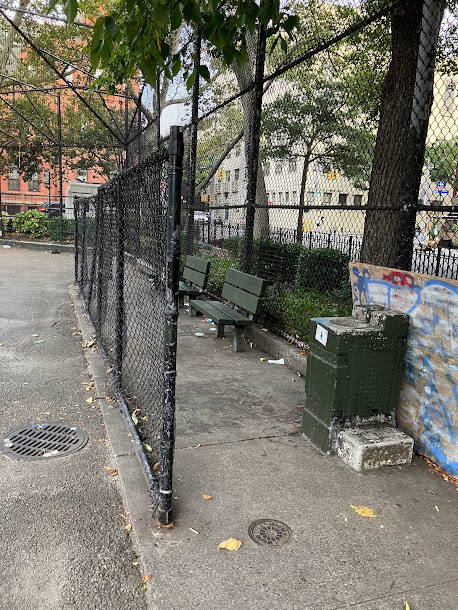 Here's a schematic of the reconstructed layout... 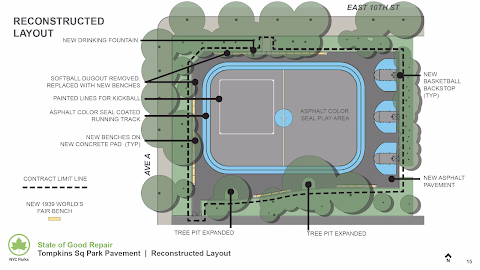 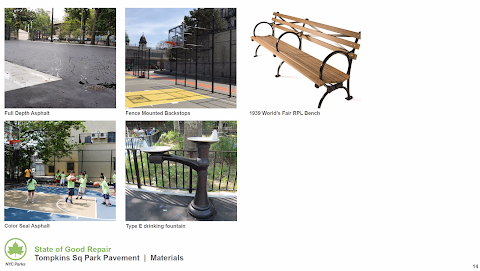 Goodstein estimated the project would take three months to complete, but he wasn't sure when work will be ready to commence.
"The start date hasn't been finalized yet," he said. "It's going to take three months, and we should definitely be done by next fall."
The presentation was more of an informational session, and no vote was required by the CB3 committee. The reconstruction is moving forward.
So what does this mean for the skaters on the lot (aka TF), hallowed ground where generations have used this space dating to the 1980s? (It has been called "the last great meet-up spot for skateboarders and their friends in New York.")
One resident commented during the meeting: "I'm really concerned that the young people in this neighborhood are being pushed out of this famous, much-loved, much-used skating space. You even opened it with pictures of skaters. What are you going to do about this?"
Goodstein said that he skated here in his youth and has had conversations with the skaters about the pending changes.
Another Parks rep, Steve Simon, chief of staff to the Manhattan Borough Commissioner, chimed in at this point.
"Max and I went there, and we personally spoke to a group of them, and they were very much in support of what we intended to do," he said. "They want to have an improved surface. And what we're doing here is by no means going to displace them. [The skaters said that] they appreciate what we're doing. And the only thing they really wanted from us ... a fountain and a slightly different variation on the layout of the benches. So we're gonna accommodate them. They were pretty thrilled with what we're planning to do and with the fact that we went out there and just spoke to them."
It's unclear just how thrilled the skaters will be with the final product next fall — after the space will likely be under construction for the prime summer months. It's also unclear what might happen with the various ramps and rails the skaters use. 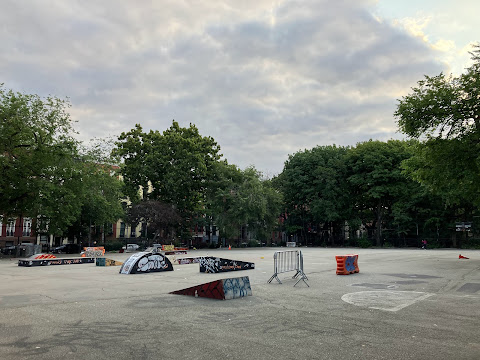 As you may recall, in September 2019, the skateboarding community came together via a petition started by Adam Zhu and signed by 33,000-plus people to show their support for keeping the multipurpose courts free of synthetic turf...  plans apparently only known to residents who attended a Community Board 3 committee meeting in May 2019. Adding artificial turf would have rendered the space useless for skateboarders and street hockey players, among other groups.
However, less than 24 hours before a much-publicized rally was to take place, the city announced that it would no longer cover the space in turf, originally proposed to make up for the amenities lost during the years-long gutting of East River Park.
"Tompkins Square Park has served as the epicenter of NYC skateboard culture for decades. As such, we have decided to leave the area previously proposed for synthetic in the park as is and will not move forward with creating a synthetic turf area there," Parks Department spokesperson Crystal Howard said in a statement to Patch at the time.
And the reconstructed layout of the space may make this the end of the epicenter of NYC skateboard culture.
Previously on EV Grieve:
What is the city planning for the multipurpose courts in Tompkins Square Park?
Posted by Grieve at 5:30 AM

Could have planted some trees there. It’s a park you know

So far, so good. If there's a real cause for alarmism, let's hear it from the kids themselves.

I note what I assume is a typo in the literature. Surely they mean 3 years, not 3 months.

They will take something away that will upset some people.

Good thing Carlina Rivera is not involved or would involve cutting down all the trees and take 12 years to complete.

Why arent skateboarders and their equipment not mentioned in the plan or images? Kickball and basketball and a walking track? Sounds like Parks is getting around to what they originally wanted, minus the turf.

@7:52 At the CB3 meeting, the Parks rep repeatedly said 3 months for completion of the project.

Skaters are going to skate no matter what. Best to give them a space so they can do their thing and have a good time doing it. Pushing them out of this area would just mean more skating in the streets, which wouldn't benefit anyone. I hope the Parks Dept does the right thing and keeps their word as far as keeping this a skate area.

I like the idea of the walking path around the edges. I like to go in and watch the skateboarders. Now I can get some exercise while I am in that part of the park.

yea and fix that horrendous so called bathroom

The city is renovating/upgrading the fieldhouse (and restrooms) next year in a separate project.

Really?? That’s such great news. The restrooms should be demolished and rebuilt.

Seems to me there is already walking path. It’s called the sidewalk and it goes all the around the whole park.

A walking loop surrounding the skateboard area imo could be a nightmare. I can't see how someone would feel safe walking it while skateboarders are doing their thing. We've all seen skateboarders flying around and i think at some point there would be a serious collision

I think it would be a nice touch to have a restroom attendant in each bathroom. This would help to ensure the safety of us all and keep those pesky dopeheads out!

Basically to sum up They are paving the place and then painting the asphalt. It would be nice if they paved all the paths in the park or better yet put in stone walkways. The park looks run down. Bathrooms are scary. Just because it’s East Village not Greenwich village this place has been neglected forever.

3 months. Yeah right. Translation : "Due to some unforeseen circumstances, the project deadline will be extended to an additional 12 months. We apologize for the inconvenience"

Pickleball courts would be nice

Police? Not happening. And the parks dept is understaffed. What would the cops do? These aren't crimes.

What about build some trees first..

This city is just gross. Shit either just withers in graffiti and decay, or it becomes som dumb sanitized over-modern thing with Astroturf that nobody asked for (Like ERP or when they close a functional street and add shitty chairs and green paint).

Keep some goddamn soul and spend the money on picking up trash and needles.

a WALKING TRACK? What a waste of space.

I'm glad that they are going to make improvements, but I'm worried for the skaters after the Central Park skate spots experience...the roller skaters there worked for years to get their pavement redone and it was so poorly done that within one week it was crumbling. Hope this doesn't happen here.

The proposed track is 1/10 of a mile.
I guess it’s might to be a substitute for East River Park’s track & field when demolished. I wonder how big is the Asser Levy playground track.

It’s important to remember that others use this area on a regular basis, too: the George Jackson Academy for Middle School boys AND a street hockey league uses this area on Sundays. I wish the Parks Dept designers would consult all of the regular users of this area. Consulting all of the regular users might generate creativity & ideas that would not have been considered otherwise. (PS: Renovating the shooting practice basketball courts are welcome!)

Good point Anonymous about consulting with the other groups that use this space, including the schools, the street hockey players and the tai chi practitioners

But i don't understand the "seal coated" running track. What is this surface? Is it just paint on the new asphalt or something more spongy? And if it's the latter, won't that interfere with skating and basketball (which the school kids play).

I get that they want to replace the running track at East RIver which Parks is so stupidly demolishing, but having a 1/10th mile loop doesn't seem worth it. Seems like a case of trying to squeeze in too many different uses at once.

More cops present is not a solution.

It's embarrassing how badly NYC treats its parks. Ignores community needs, lets them fall to shit while discouraging community engagement or even volunteer labor, rams through gross plans that have no buy-in, treats the existing trees and habitat as disposable annoyances, and so on. I fantasize about an administration that may actually treat the city as a place to *live* in, not exploit endlessly, and its citizens as, well, citizens...

How many millions of dollars did Parks Dept spend on rebuilding the East River Park track and field for what will, in the end, have been for about 4 years?

5:29p "or when they close a functional street and add shitty chairs and green paint"

The department of Transportation is looking to permanently close Avenue B between 8th and 9th street next to Tompkins Sq Pk. The neighborhood needs to give their input by September 30th:

@1:46 so asinine I swear to God. The DOT needs to literally stay in their lane.

These kids, skate, create, and ponder existence in its self! This is the center of there universe!

It seems a new layer of pavement is justifiable ~ BUT… other than that, funds would be better spent on over all park clean up!

Do people not like "1939 World's Fair benches"? Or was it funny the parks was noting the specific bench?