An ambitious project is in the works for 78-82 E. Fourth St. that would bring together a restaurant, movie theater and cabaret under one roof while reviving some East Village nightlife history.
The operators behind Ella Funt & Club 82 are on tonight's CB3 SLA & DCA Licensing Committee docket for a liquor license for the two-level space between Second Avenue and the Bowery.
There are several elements to this proposed establishment — a French restaurant, movie theater and performance space. The questionnaire on file at the CB3 website (PDF here) provides more detail and renderings of the 150-person-capacity theater space, which already exists in the basement (see below for more history of this address).
There's also a mention of "screenings of independent and old films five days a week," The management team includes Harry Nicolaou. His family operates several indie theaters, including Cinema Village on 12th Street between University and Fifth Avenue.
On paper, the concept sounds like a good fit for a block with destinations such as La Mama Experimental Theatre Club, the Duo Multicultural Arts Center, the Kraine Theater and the New York Theatre Workshop.
Tonight's meeting starts at 6:30. You can tune in via Zoom.
And now some history of the space... 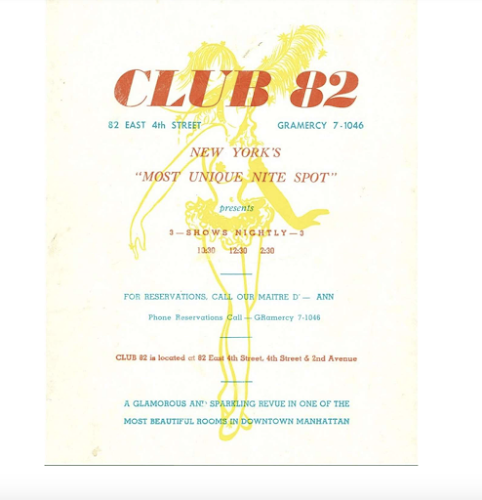 If you were an adventurous visitor to New York City in the 1950s or 1960s, you might have found your way to Club 82. A basement nightclub at 82 East Fourth Street, it wasn't much to look at from the outside...
But once you made it there, you'd descend the steep stairs into an elegant, transporting nightclub decked out in the height of mid-century kitsch: mirrored columns, plastic palm fronds, elaborate banquettes, and white tablecloths. On the tables would be souvenir knockers, a small wooden ball on the end of a stick emblazoned with the club's name, which patrons would tap on the table when they were pleased with a performance or wanted to call a waiter. Knockers had one benefit over clapping: You didn’t have to put down your drink to use them.
Club 82 was a trendy place to be. If you were lucky, celebrities like Judy Garland, Elizabeth Taylor, or Salvador Dalí might be in attendance on any given night. A club photographer would circulate among the tables, snapping keepsake photos for a $1.50 or $2 fee for audience members, who were decked out in suits and cocktail dresses and would get an 8″ by 10″ print to take home at the end of the night. There wasn't a cover to get in, but there was a drink minimum and an extensive cocktail menu to hit your required mark.
And of course, there was the stage, which was the main reason you would've come to Club 82 in the first place. The club was known for its elaborate live shows that ran three times a night into the wee hours of the morning.
What made Club 82 unique was that it was an early bastion of drag and gender impersonation: Almost all of the performers in the floor show where men dressed as women, and most of the wait staff were women dressed as dashing young men in tuxedos.

In the early 1970s, Club 82 became a rock club, featuring bands like the New York Dolls, Teenage Lust, Suicide and Another Pretty Face.
The subsequent iterations of the space included a movie theater and an all-male strip club. Ron Wood of the Rolling Stones tried to make a go of it as a music club again in 1990 with Woody's. The basement space reopened as the Bijou Cinema around 1992, per Cinema Treasures, operating off and on through the years in different capacities until 2018.
Stillwater Bar & Grill was a ground-floor tenant, shutting down in the spring of 2019 after 15 years in service.
Posted by Grieve at 5:20 AM

I remember going into Club 82 as a young teen...That place was WILD and reeked of Seediness and Danger. I guess hindsight makes it all more romantic than it really was.

The good old club 82.......where the hoity-toity went slumming back in the day. They used to run an ad in the Village Voice every week that featured the creature from Edvard Munch's painting The Scream. They had cubicles in the basement where anon men could meet in private to discuss world affairs or whatever happened to be on their minds, I suppose. And this is the place where Lou Reed met Rachel, his trans girlfriend in the 70's and to whom he dedicated his album Coney Island Baby to. Aside from the mini-masterpiece title track the record has some outstanding guitar work on it. She's My Best Friend is a brilliant piece of 70's pop rock. Rachel, poor thing, split with Lou and became a heroin addict, contracted HIV, died in the late 80's and was buried in Potter's Field. Sad Song indeed..................

In the early 1980s this place was an illegal gambling den/casino with a full liquor bar. After places like the Mudd Club closed this remained open until the morning. It was a place where the party could continue after hours. I went a couple of times just for drinks as neither I nor any of my friends gambled. We were just kids.

This place is well known in the gay community and functioned as a men’s sex club until just a few years ago. They served free pop corn and sodas but no booze. It too was open until the mornings.

I hope this new film/cabaret/French restaurant gets approved I would definitely go back for more.

"I would definitely go back for more"

Kind of amazing that the Bijou remained relatively obscure even during the age of the internet.

Recently found an 8" by 10" of my grandmother at Club 82. The venue was obviously a draw for the adventurous tourist of the early 50's. If the walls here could talk, the stories they'd tell would certainly go viral!

loved that dark hole, even Another Pretty Face played there.