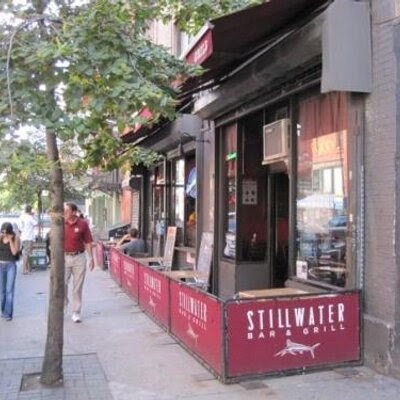 Multiple EVG readers shared the news that the Stillwater Bar & Grill closed its doors on Fourth Street last night after 15 years on the block here between Second Avenue and the Bowery.

At least one regular chalked up the closure to a "landlord dispute."

Since 2008, the neighborhood sports bar also served as home to the NYC Cowboys — the official alumni group for Oklahoma State University.

News of Stillwater's closure made it all the way to this Oklahoma State superbooster ...

Over the years, #okstate fans in NYC have gathered at @stillwaternyc to watch games and connect with fellow Cowboys. Sad to hear the place will be closing. Here’s a good memory from 2011 when @darrenrovell and I met up at the restaurant. @NYCCowboys pic.twitter.com/uh9ol1gbbP


The bar was actually not named for the city in north-central Oklahoma, but rather owner Matt Keane's love for fishing.

It should be noted that Stillwater was also a haven for the indie theatre crowd, both those making and those viewing work up and down East 4th St. at NYTW, The Kraine/Red Room, La MaMa, IATI/Circulo.