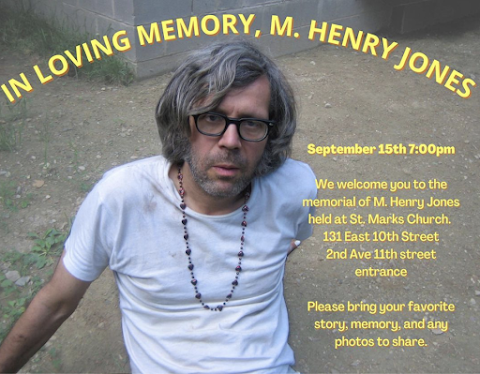 M. Henry Jones, a longtime East Village-based animator, filmmaker and 3D photographer, died this past June at age 65.
This Thursday evening at 7, his many friends and loved ones are coming together for a memorial at St. Mark's Church-in-the-Bowery on Second Avenue at 10th Street.
Here's more about him and his work via the Burchfield Penney Art Center:

In 1975 he moved to New York City, where he attended the School of Visual Arts. He soon became one of many prominent figures in the East Village alternative art space, working with several artists and musicians, and founding Snake Monkey Studios, a concept based out of his apartment on Avenue A.
Jones' films throughout the 1970s and 1980s transcended the boundaries between moving and stagnant imagery, employing a meticulous and carefully crafted process to give viewers a unique visual experience. His early works are also representative of some of the earliest interactions between music, and films intended to complement its structure; one of Jones' most widely recognized films, "Soul City," is a stroboscopic color film created in collaboration with The Fleshtones. The two-year production of the two-minute film required each individual frame of the group's performance footage to be precisely cut, tinted and rephotographed.
The film made its debut on the music and art scenes in 1979 and was unlike anything that had ever been done before. "Soul City," along with Jones' other animations for musicians pioneered the music video artistic concept years before MTV and the rise of music videos as we know them today.

David Hershkovits shared this about him in a July post at Legsville:

Visiting him in his studio or running into him in the East Village neighborhood where we both still lived was an adventure in its own right. My head would spin getting lost in the weeds of his enthusiasms, but I'd always walk away elevated by the conversation, inspired by his hands-on approach and dedication, in his words, "to make the world a better place."

And from curator Marc H. Miller of Gallery 98:

Fans of Jones often refer to him as a “technical genius” but he is probably better described as a forward-looking visionary blessed with stubborn perseverance. Because his first works date nearly a decade before the widespread use of computers and digitization, Jones was restricted to labor-intensive analog techniques to create effects that would soon be facilitated by digital programs like Photoshop.
Today we marvel not only at the visual effects he produced but also at the arduous, time-consuming processes he needed to use to achieve them. In hindsight, it becomes clear that the technology itself was the true subject of Jones’ work, as well as its most important component.

Never got to know him well but loved his Snake Monkey space on Ave A, especially with its old-school TV facing the street screening films all night. Always something going on there. Saw Ginsberg hanging out a lot. I was sorry he had to give the space up, and am now very sorry that we’ve lost him altogether.

I live on 10th Street near the much smaller space he had for the last few years, near Ave C. I didn't know anything about his work until now, I just recognized that Snake Monkey sign. I wish I had looked him up and chatted with him while I had the chance.

We knew Henry. Rachel. The kid.
From the neighborhood.
Are kids went to school together.
Henry 🙏🙏🙏♥️

Henry was one of the most generous of spirit people i've ever met, he and Rachel were so kind to people in need as well. 15 or so years ago a friend of ours was left homeless after a fire and Henry got him shelter clothes and work at a time when all weren't so easy to come by He'd elevate people and help them find their groove. Henry was so damn brilliant, talented, eccentric,and funny! a true legend in the art world as well as the LES

Henry was the truly one of kindest, gentlest, talented people I’ve ever met. It was always a pleasure to run into him. Such a unique artistic talent. Condolences to Rachel, Atticus and everyone who loved him

You have to respect people who did this kind of painstaking analog work.

Henry's work is part of the Museum of Modern Art's Club 57 collection. He was always so calm, kind, polite and super smart. He was a wonderful father to his son, Atticus. RIP, Henry. My deepest sympathy to Henry's wife, Rachel, and to Atticus.

RIP Dear Henry.
If anyone is savvy w wiki editing
well, I am not, but did try to start a page for him.
Perhaps someone would pick up the thread.
https://en.wikipedia.org/wiki/Draft:M._Henry_Jones

Very sad to learn of "Hank's" passing. That is who he always was to me He was my first date back in the 70's and i guess first boy friend. His dad took us to a movie about gamma rays. LOL. He was enthralled. I was out of my league. I used to cut his hair for him. He was a gentle soul with huge enthusiasm. He followed and lived his dream.